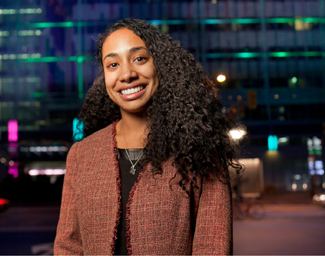 When Amanda Evans ’13 first proposed a partnership between The Children’s Hospital of Philadelphia, where she works, and SPARK, a nonprofit mentoring program for middle-school students, she was turned down.

Hospital officials initially believed the program would be a duplication of mentoring services that CHOP provides to high-schoolers. But Evans, community relations coordinator with the Office of Government Affairs, Community Relations and Advocacy, persisted, saying everyone needs an advocate, especially economically disadvantaged seventh-and-eighth-graders.

“One of the reasons I enjoyed Lafayette so much is the kind of mentorship you get with alumni. They’re really there to help guide you in your career,” says Evans, a self-designed major in community development and social policy. “We can’t overlook others because they don’t know someone. I think it’s really important to grab these kids early before they get to high school if we want to increase the high-school graduation rate.”

Evans, who has a master’s from Drexel University School of Public Health, eventually convinced hospital leadership to pilot the program, and last spring two eighth-graders from John Barry Promise Academy in West Philly were paired with a mentor at CHOP for 10 weeks. During each meeting they worked on skills such as goal setting, networking, and time management. They also produced a career discovery project.

“It’s a way to open their eyes so they can see what can be achieved if they apply themselves,” says Evans. One student, who had lost a relative to leukemia, outlined a treatment plan for the disease, while the other designed a new indoor recreation center as a place where he and his friends “could go after school and stay out of trouble.”

The program was so successful that 10 new middle-school students will receive a CHOP mentor this spring, all thanks to Evans. She, in turn, credits her relationship with Deborah Byrd, professor of English, and her internship at the Easton Community Center for starting her on a path of service and advocacy.