Tamara Carley is a geologist, but she could also be considered a storyteller. And the tale she’s spinning is one that begins millennia ago and continues in the future. Her research focuses on studying northern volcanic systems to predict future eruptions. 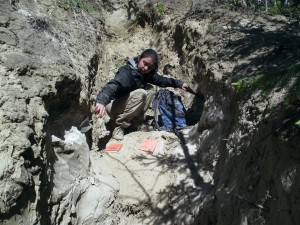 “Each mineral, each shard of glass, and each rock fragment contains a story of the magma body from which it formed,” explains Carley, assistant professor of geology and environmental geosciences. “Together, my students and I are working to interpret these small-scale stories and merge them together to tell a comprehensive story of the volcanic, sub-glacial region.”

Carley is working on two major projects. In Iceland, she is studying glacially derived river sands to learn more about the volcanic systems located beneath Vatnajokull, a large ice cap that covers most of southeast Iceland. In Alaska, she is working to develop a reliable method to trace volcanic ash beds of unknown origins back to the volcanoes from which they came. 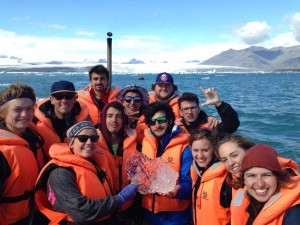 Students on the Iceland interim course pose with an ice chuck from a glacier.

Because volcanoes in both regions are very inaccessible, scientists’ knowledge of their past behaviors is limited. The volcanoes, though, are active and have the potential to erupt, which could have dangerous or even deadly results. Carley says the 2010 eruption of Eyjafjallajokull is a perfect example – it produced an ash cloud that grounded many European flights for days.

Carley is giving her undergraduate assistants a birds’-eye view of cutting-edge fieldwork and research. She is mentoring students on honors thesis research and through the College’s EXCEL Scholars undergraduate research program.

Geology major Emma Sosa ’17 (Durham, N.H.) traveled to Alaska over the summer with Carley to collect samples of ash from unknown volcanoes. Back in the lab, they are working to compare a microscopic mineral called zircon found in various ash samples to see if they came from the same volcano. Zircon, Sosa explains, is especially good at preserving magma chemistry.

Due to glacial carving in the area, it is difficult for scientists to use traditional mapping techniques to follow ash deposits back to their sources. Without this information, researchers cannot use patterns to predict future eruptions of these active volcanoes. Isolating the mineral signatures helps them “fingerprint” magmatic systems to connect the ash beds to their volcanoes of origin. 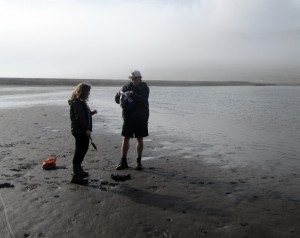 Fieldwork is a crucial and exciting part of research, but it’s important to do it right, says Sosa. She did a lot of preparation prior to traveling to Alaska, so she knew what to look for: “We didn’t just go to Alaska and start sampling every ash bed we saw,” she says.

“Traveling to Alaska to do fieldwork is an incredibly rare experience to have as a sophomore in college,” she adds. “There is no substitute for actually going out into the field and getting your hands dirty. It is fascinating how much we can tell about our planet’s past from the chemistry recorded in the rocks.”

The samples Scheland collected in Iceland are being used by geology major Allie Nagurney ’16 (Amherst, Mass.) for her senior honors thesis. Scheland used similar sampling techniques in Iceland as those used in Alaska; he is now reviewing literature and analyzing data sets to find trends in the geochemical data preserved in the zircon minerals. 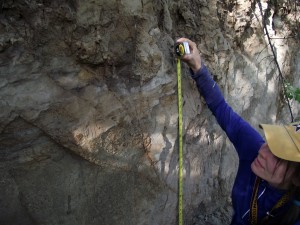 “Iceland is a unique and awe-inspiring place – the entire country is the result of a geologic coincidence,” he says. “Its landscapes are littered with waterfalls carving into the geologic features created by the volcanic activity that holds the islands together. Dr. Carley is testing a new method of investigation with zircons. That is what is most exciting – being part of the evolving scientific method.”

Connors used the Iceland samples she collected for a semester-long research project for her Earth and Planetary Materials course. She will start working with Carley as an EXCEL Scholar next summer. Geology major William DeBarba ’17 (Marion, Conn.) also worked with Carley as an EXCEL Scholar to study xenoliths (“foreign rocks”) from the 1875 eruption of Icelandic volcano Askja. Carley also advised honors thesis research related to the Iceland project conducted by geology graduate Amanda Leaman ’15.