The Students become the Teachers

Michael Galperin ’16 and Camila Moscoso ’16 will teach English to children in South Korea and Venezuela through Fulbright Fellowships.

Michael Galperin ’16 (Warminster, Pa.) was on his way to dinner in Miami one evening during spring break when he got the email. 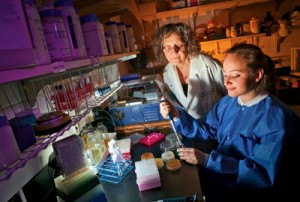 Nearly a thousand miles away, Camila Moscoso ’16 (Falls Church, Va.) checked her email while taking a breather from service work during an Alternative School Break trip in New Orleans. She found the message waiting in her inbox.

The two contacted one another almost immediately. “She’s my best friend,” Galperin says. “She’s one of the first people I texted.”

Both, it turns out, had received the same news. Each had won a Fulbright – a prestigious, life-changing fellowship that will allow them to work and learn in communities far from home.

The U.S. Fulbright Student Program provides funds for study/research projects or for English Teaching Assistant Programs. Galperin and Moscoso will use the money to teach English to children in South Korea and Venezuela, respectively, starting this fall.

The trip is a homecoming of sorts for Moscoso, a double major in biology and international affairs. Her mother is Venezuelan, and she took frequent visits there as a child to see her grandparents. She hasn’t been back since her extended family emigrated to the U.S. years ago.

During her time at Lafayette, she visited Vietnam, South Africa, and Argentina – all stops on a public-health-themed study abroad tour. She lived with resident families and learned from local professors while on the trip. “You really felt up close and personal with it,” she says.

The trip convinced her of her future in public health: Doctor or nurse practitioner jobs are clinical, office-bound experiences. Public health jobs plug you into a community, where you can see your work change the world. At the end of the year, Moscoso plans to earn a master’s in public policy and a Ph.D. in public health. 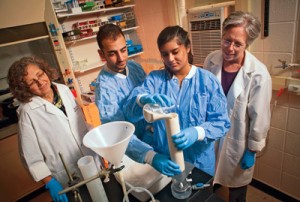 “I just love the idea of helping people,” she says. Health care is “so important. It’s a general human right.”

Venezuela is different from the country she visited as a child, where she was charmed by the people’s trustworthiness and openness. Today, the country is unstable and embroiled in political strife.

“Service has been my way to form strong connections in a community,” Moscoso says in the personal essay she wrote in her application for the Fulbright, “and I plan to utilize service to strengthen my roots in Venezuela.”

Both she and Galperin will get the chance. During their time abroad, Fulbrighters share daily experiences with the people of their host countries. “Through engagement in the community,” the program says on its website, “the individual will interact with their hosts on a one-to-one basis in an atmosphere of openness, academic integrity, and intellectual freedom, thereby promoting mutual understanding.”

Galperin is looking to do more than teach English in South Korea. Galperin’s mother worked as a gastroenterologist in the Soviet Union before she and her husband emigrated to the U.S. “So that’s always interested me,” he says. “But also cardiology.”

A biology and French double major, Galperin is hoping to go to medical school and work as a doctor in a French-speaking country such as Madagascar or Morocco.

Like Moscoso, Galperin is hoping to learn more about public health while teaching in a foreign country. But while Moscoso is fluent in Spanish, Galperin knows only a little Korean. Enough to get by.

He visited the country seven years ago as part of the Camp Fulbright Junior Internship Program, where he worked as a counselor and took an accelerated Korean course at Kwangon National University.

“I forged lasting memories with my Korean friends through singing the most popular American and Korean karaoke songs and having in depth conversations about Harry Potter theories,” Galperin says in his personal essay. “Seven years later, those memories are still vivid as I discuss them with my Korean friends.”

Now Galperin hopes to immerse himself in the culture again, this time with an eye toward a better understanding of the health care system. Outside of the classroom, Galperin hopes to volunteer at clinics and hospitals.

For information on applying for scholarships and fellowships, contact Julia A. Goldberg, associate dean of the College, (610) 330-5521.