Lafayette in the Big Apple

It’s a big Lafayette selling point. You take I-78 east, and in about an hour you’re at the center of the universe.

But recently, we made a move to draw the cosmopolitan American city closer than it’s ever been. 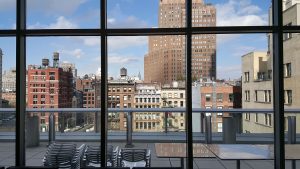 Lafayette has agreed to a lease with New York Law School for Lafayette classroom space in the Tribeca neighborhood of Lower Manhattan. Students, faculty, and others affiliated with the College will now have nearly 1,500 square feet of space — two classrooms and a common area — in the heart of New York’s museums, architecture, and culture.

“Lafayette is incredibly fortunate to be close enough to New York City to take advantage of the educational opportunity that the city offers,” says President Alison Byerly. “Very few liberal arts colleges have that kind of proximity, and we really want to be able to allow our students to take the fullest advantage of being close to a major metropolitan area and all the resources it offers.”

The space features two versatile rooms, each capable of serving a 25-student class. A hallway separates the two rooms. 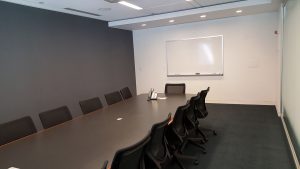 “There are long hallways with glass curtain walls” allowing views of buildings, says Robert Mattison, Metzgar Professor of Art. “I can pull open curtains and teach the whole history of architecture.”

The idea, Mattison says, is several years old but gained traction once Byerly’s administration took the helm in 2013. 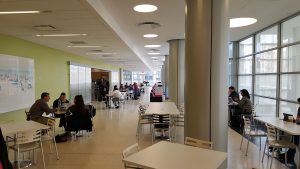 John O’Keefe, vice president and chief information officer, led the group, which worked with New York-based consultant U3 Advisors to find a space. Lafayette owns an investment office at 40th Street and Park Avenue, but determined it wasn’t cost effective to expand it into something students and faculty could use.

In addition to Mattison, who hopes to bring students there several times in the spring semester, other faculty are planning opportunities for other classes, musical and theatrical performances, and more. Alumni, admissions officers, career services, and others at the College are already imagining uses for the rooms: interviews, receptions, networking meetings between students and alums.

“We’re starting out with this in a way that I think we can control and make sense and see where it goes,” Mattison says. “It distinguishes us from so many other schools.”