William Shakespeare wrote the play four centuries ago, but never has Othello seemed so current.

According to Professor Ian Smith, recent tensions across the U.S. underscore the racial themes in the playwright’s early 17th century story of the Moor of Venice. 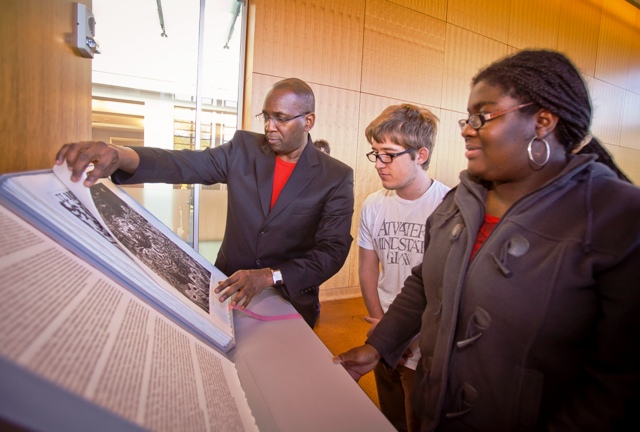 “Despite Othello’s potent political relevance for today, where are the voices proclaiming, ‘It is we who are Othello?’” Smith said during a lecture last month marking the 400th anniversary of Shakespeare’s death. “Further, what might such a general absence reveal about our scholarly practices and profession as literary critics?”

Rather than Othello, the titular character in Hamlet has for centuries been identified by the white-dominated world of literary criticism as Shakespeare’s quintessential everyman. However, Smith says shifting attitudes and the inclusion of more African American scholars in literary circles have challenged the notion of how universal Hamlet actually is.

Smith’s presentation, entitled “Shakespeare’s Othello – The World, the Text, and the Responsible Reader,” discussed how a post-racial, colorblind America has been challenged by the brutal reality of multiple deaths of unarmed black civilians, forcing an inquiry into the postracial myth’s own premise as complicit with the politics of white privilege.

His talk served as both the Paul and June Schlueter Lecture in the Art and History of the Book as well as the Richard H. Jr. ’60 and Joan K. Sell Chair in the Humanities Inaugural Lecture.

Lafayette will also host a two-day symposium titled “Shakespeare, Race, and the Practical Humanities” April 19-20, 2017. It will further address the practical humanities with a special focus on Shakespeare and race.

Smith said the racially-motivated mistrust illustrated in Othello is emblematic of the mistrust between blacks and whites today that’s at the root of the current disharmony playing out in places like Baltimore and Ferguson, Mo.

“The public’s ability to perceive and speak coherently about black persons is fundamentally undermined by precisely the kind of racial disjunction Othello intuits and that has become even more socially, economically, and perceptually ‘thick’ and pronounced with time,” Smith said.

Today, that disconnect is starker than ever. Smith cited polls that show a majority of African Americans consider events like the shooting in Ferguson raises issues worthy of discussion; a sizeable percentage of whites say the issue of race “is getting more attention that it deserves.”

Near the end of Hamlet, the dying Danish prince asks his friend Horatio to tell his story. In reality, Smith says, it’s been the job of literary critics to share Hamlet’s alleged universally identifiable story with readers.

Today, in the racial context of our society, that job has become even more pertinent for readers.

“I would emphasize Othello’s stated chief concern regarding a posthumous biography,” Smith said. “‘Speak of me as I am.’”

Smith is the inaugural recipient of Lafayette’s Richard H. Jr. ’60 and Joan K. Sell Chair in the Humanities. The professorship was endowed by Robert Sell ’84 and his wife, Susan, in honor of Robert’s parents.