It was at a time when Chanel Mowatt ’17 wasn’t quite herself that she found out who she truly is.

In her first year at Lafayette, the English and anthropology & sociology double major took on roles in several plays.

“I fell in love with the experience,” says Mowatt, who grew up in Queens, N.Y. “I think my role in Clybourne Park—a play about gentrification—was an ‘a-ha!’ moment for me because it really tied together my English and anthropology disciplines, and also incorporated theater so that we were not only acting the show, we were learning about gentrification from those in Easton as well as in the classroom.”

The experience was so profound for Mowatt that she added a theater minor to her already weighty academic course load and is now strongly considering becoming a screenwriter.

“When I first came to Lafayette, I had no clue what I wanted to do and every time I take a class, there’s a new skill that I acquire that opens new doors for me,” she says. “As of right now, I’m interested in going into the entertainment field as a writer. As with English and anthropology and sociology, I have developed the tools to not only be able to hear and learn about other people’s stories, but also to be able to tell them in a way in which their voices can be heard.” 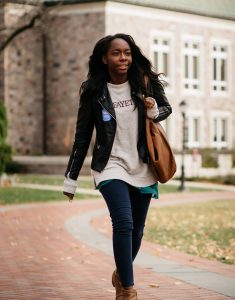 That ability is manifesting in a screenwriting project in which Mowatt is featuring people she has met at Lafayette and the impact pop culture has had on them.

“Although I’m doing it for a class, it’s not the typical academic paper,” she says. “I get to do things outside the box for my disciplines.”

Mowatt’s academic pursuits have taken her well beyond the box, far beyond the campus. For instance, she took a short-term study abroad theater class in London and Dublin.

“It was valuable to see how other cultures treat the things that I really enjoy, especially in terms of the theater,” Mowatt says, adding that the group took in several Shakespeare plays. “That was beneficial since I’ve had classes where we have been talking about how other cultures perceive these shows and the way they’ve been put on.”

She spent the spring semester in Australia’s University of Sydney, where she studied anthropology and sociology in terms of Australian culture.

“I also was able to do research through the study abroad offices of Lafayette and the University of Sydney and with a sociology professor there about the effects of study abroad on students,” she says.

Mowatt is extremely thankful for her scholarship—provided by benefactor Ala Hamilton-Day ’74—that allows her to attend Lafayette and has opened up a world of possibilities to her.

“I never in my wildest dreams thought I would get to go to college, let alone go to my dream school,” she says. “I appreciate having the opportunity provided to me to do so and not having to worry about it financially. Appreciating that generosity is something that I will take with me from Lafayette.”