Despite research suggesting that poor readers can be identified by the first grade, the rate of false negatives in testing them is as high as 50 percent. As a result, many children who need early intervention do not receive it. Early intervention is essential to close the reading achievement gap, which means that accurate and efficient early detection efforts are critical.

Lisa Gabel, associate professor of psychology and neuroscience, wants to change that. And she’s on the verge of a breakthrough. She has developed an alternative early-detection method that appears to have a greater accuracy rate—up to 80 percent—and her dream is that it will one day be available free of cost. Thanks to a $374,000 grant from the National Institutes of Health, Gabel will be able to continue working toward that goal. 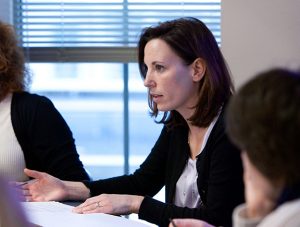 She has worked with professional collaborators and student researchers to develop a virtual maze that has a high rate of detecting dyslexia. The learning disability, which is estimated to affect five to 17 percent of school-aged children, makes it more difficult to process written language. She has found that children with a reading impairment consistently perform more poorly on the computer-based maze than children who don’t have reading difficulties. She has consistently seen this in five- and six-year-olds as well as eight- to 13-year-olds.

“There is such a strong correlation with problem-solving impairment with the maze and dyslexia,” she says. “We don’t know what it is about the maze that correlates so strongly with dyslexia, and that’s what we plan to study further.”

Gabel, who has been studying the biology of dyslexia since she was a graduate student, recently completed two years of research in Germany. As an Alexander von Humboldt research fellow at Friedrick-Alexander Universitat in Germany, she recruited children with diverse language backgrounds to try the maze to see if their performance would match that of the American English-speaking children she had previously studied. They did.

“That makes this all the more exciting,” she says. “If we can use this maze task for early detection and it works regardless of language, we can use this to positively impact children in multiple countries. It could have worldwide impact.”

With the grant money, Gabel will be able to fund two EXCEL Scholar research students a year for the next three years, plus summer researchers. That will enable her to broaden the scope of children studied. In the past, Gabel has focused her attention on children in Boise, Idaho, where one of her research collaborators is based. Gabel, whose work is also supported through the philanthropy of Alan ’56 and Wendy Pesky P’87, will expand her study group to include children in Pennsylvania and New York. She would also like to study preschoolers.

Gabel also will continue to collaborate with Evelyn Johnson of Boise State University, a special education researcher, and Jeffrey Gruen, professor of pediatrics and genetics at Yale University. This will open up additional learning opportunities for Lafayette students, who will get to interact with and learn from Johnson and Gruen.

Above all, Gabel says she is especially grateful to all of the students who have worked with her to get the research off the ground, including Monica Manglani ’13 and Nick Escalona ’14, who developed the virtual maze.

“If it wasn’t for students who did all of the initial studies, we would’ve never had the opportunity to get this grant to continue this work,” she says. “The students were really responsible for driving this research. They play a major role in any success that we have.”

Get to know us

Article penned by Lafayette student, alums, and professor provide an explanation for how moving animal groups change shape over time

In the media: Prof. John Kincaid quoted in articles about election of state and federal House speakers

We want to meet you!

Come on by.
Events loading...
Our Pulse Our People