On the Frontiers of Discovery

Often times research falls to graduate students. Not so at Lafayette.

Undergraduates work alongside faculty on substantial research projects, like the effect of steroid hormones on male zebra finches or developing a solar device to disinfect water supplies. These are hands-on projects. Students are challenged to make a significant contribution and are involved in all aspects of the research, from reading and analyzing articles to designing experiments, testing hypotheses, and interpreting data. Sometimes it includes helping to write an article about the results for publication or even present findings at an academic conference. This summer EXCEL Scholars took a deep dive into intellectual opportunities around faculty projects that align with the students’ majors and topics of interest. These scholars worked closely and collaboratively with faculty. When the academic year resumed, the students presented their work in two hour-long poster sessions. Roll over and click on the photos below, and scroll down for videos and short articles, to learn more about the scholarly endeavors of the faculty and students at Lafayette. 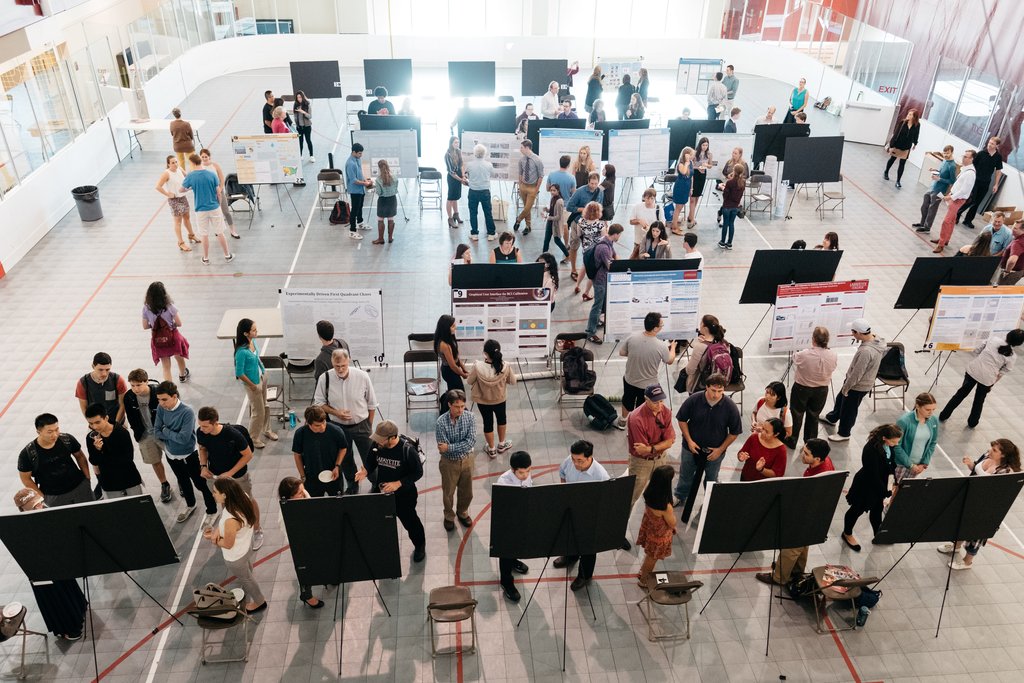 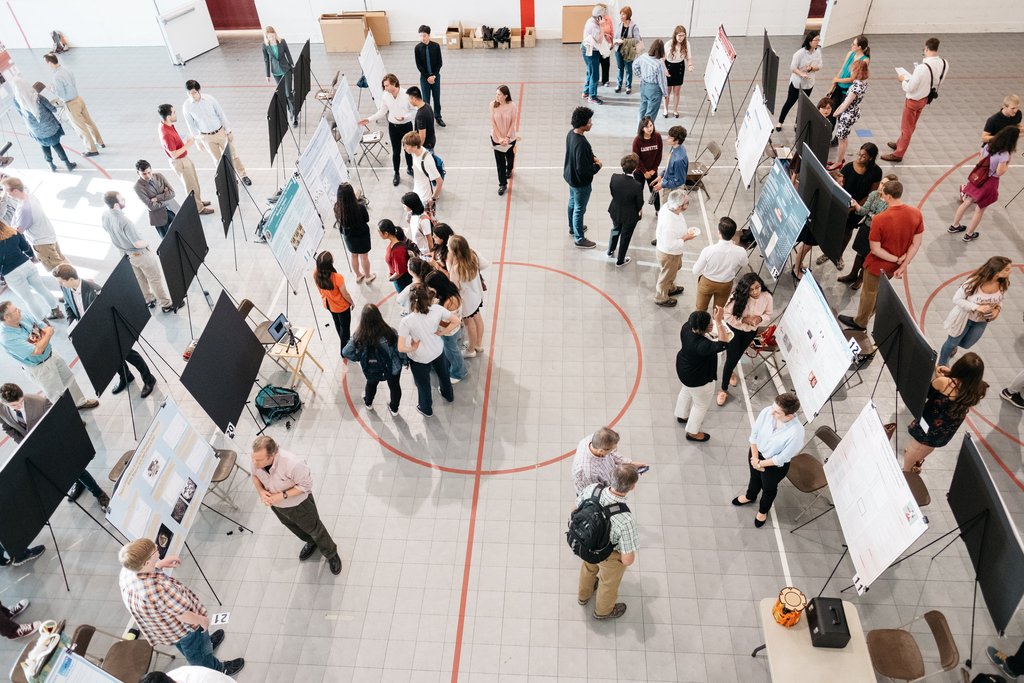 No. 3 CFD Analysis of Flow Patterns in Human Respiratory System 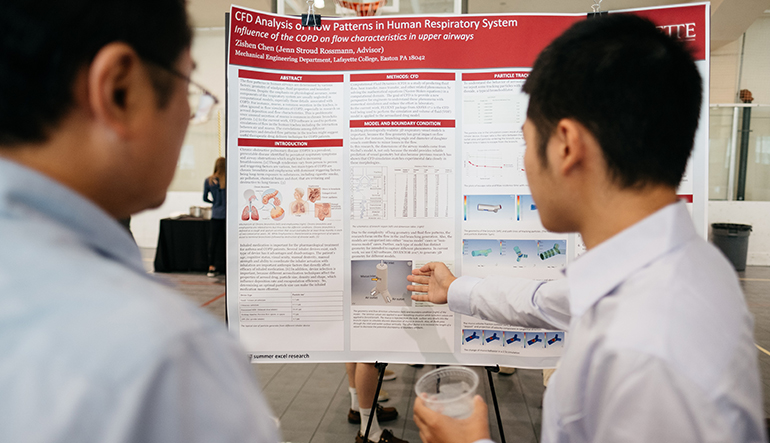 Inhalers are designed to transport medicine into the lungs. But what happens when the airways are clogged with mucus? This is the fate of patients living with chronic obstructive pulmonary disease (COPD), which includes diseases like emphysema and chronic bronchitis. Zishen Chen ’19 and Jenn Rossmann, professor of mechanical engineering, set out to research how to make inhalers more effective by studying the mechanics of human airflow. “Getting particles through the congestion is the challenge,” says Chen, who is pursuing a degree in mechanical engineering. By calculating the flow details in physiologically accurate airway models, in the presence of varying amounts of mucus, Chen and Rossmann hope to determine the optimized drug particle size.

No. 4 Applying the Kelly Criterion to College Football Betting 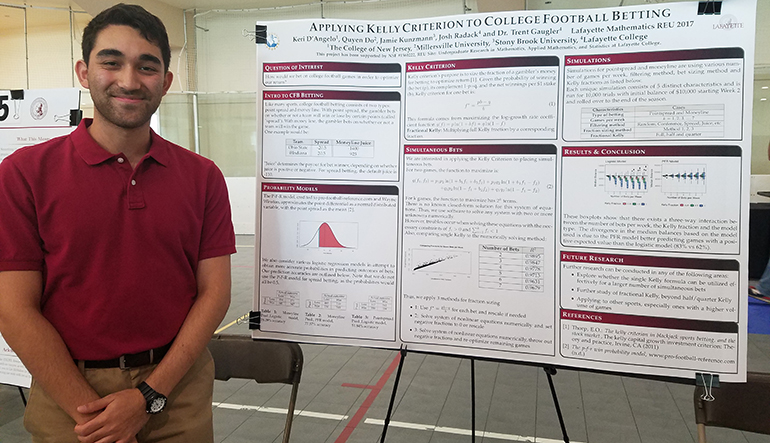 Hope to win big as you double down on college game day? Think again! The best bet is betting the spread. Students found that logistics and probability models didn’t improve a gambler’s chances. Seems the simpler the model, the better. Students did enjoy blowing off some statistical steam by joining Professor Trent Gaugler on the basketball court for some pick-up games. They are not sure whether those games were rigged because they can’t recall how many times he won, but they believe the odds were in his favor.

No. 8 Wheelchair Controlled by Brain-Computer Interface

No. 21 The Effect of Alzheimer’s Disease Protein, Beta Amyloid, on Object and Context Recognition Memory in Rats 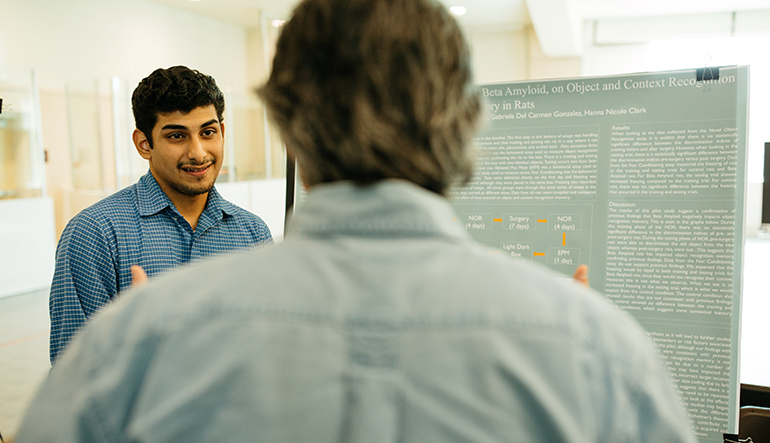 Beta amyloid is a protein found in every human’s brain. But there are higher concentrations of it in the brains of people who suffer from Alzheimer’s disease. Jafar Bhatti ’19 wanted to test the theory that beta amyloid is linked with memory loss. He used rats as his test subjects and found that those with high beta amyloid levels indeed had poor memory. They reacted to familiar objects that should’ve sparked some recognition as if they had never seen them before. Animal work was new to Bhatti, whose project began with spending quality time with his rats. When he first interacted with them, their stress levels were high: “There was a lot of peeing and pooing; it was really gross.” But after three days of him holding and petting and bonding, the rats were comfortable with Bhatti and ready to begin work.

No. 22 Sustainable Solar Fuels? An Economic and Environmental Analysis 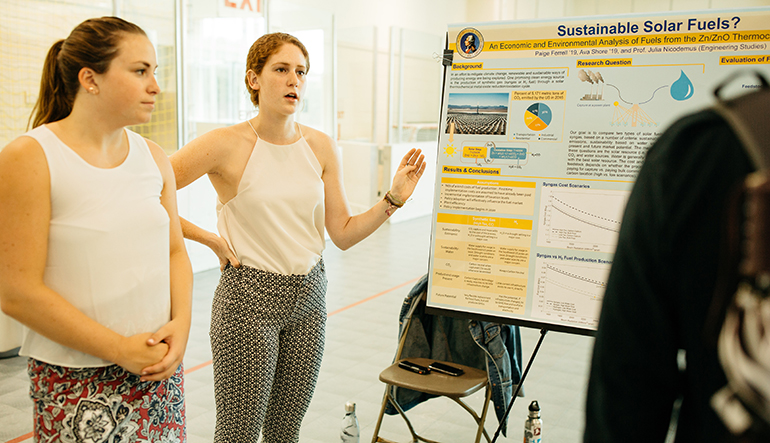 A clean and infinite supply of energy, the sun has always been a beacon of hope in the scientific quest to mitigate the effects of climate change. As dependable as it is, the problem with that darn sun is that it doesn’t shine on cloudy days, and its energy is difficult to store. Paige Ferrell ’19, Ava Shore ’19, and Julia Nicodemus, assistant professor of engineering studies, focused on the sun over the summer to research the possibilities of creating a fuel made through a solar thermochemical process. One method involves converting carbon dioxide and water into syngas, which can be used directly for home heating or at traditional, fossil fuel-burning power plants, and to produce liquid hydrocarbon fuels for transportation. The team also analyzed the potential of using solar power to create clean-burning hydrogen gas from water. But that darn sun again! In the region with the most abundant solar resources, like the American Southwest, water is limited. Another concern: Syngas ultimately results in the production of carbon dioxide. “It’s very exciting, but there’s more to do,” Ferrell says. “Environmentally friendly solar fuels hold so much promise as the energy industry looks to build new energy infrastructure to control climate change and remain competitive.” 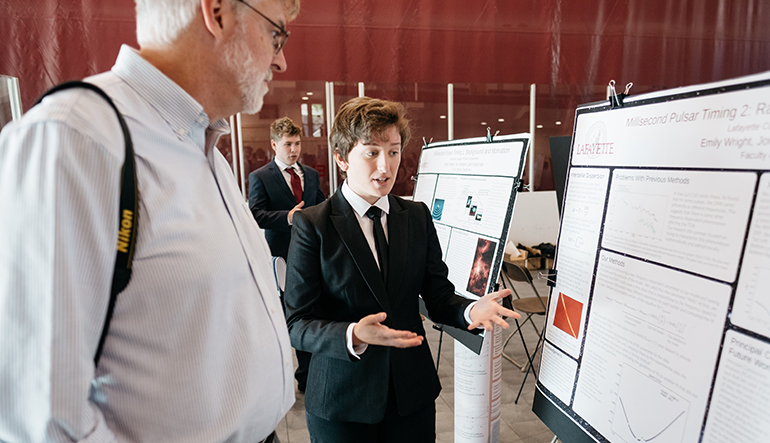 Astronomers observing radio pulsars had found a mystery. Sometimes the signals from distant pulsars arrived earlier or later than expected at certain radio frequencies. The students dove into the problem to try to figure out what was going on. They developed new mathematical models, computer code, and software tools for the project. The highlight of the summer was a trip to Puerto Rico to use Arecibo Observatory. This is the largest telescope in the western hemisphere, as large as 14 football fields. Besides staying up all night to make observations, students had a thrilling visit to the telescope platform, suspended 500 feet in the air over the telescope’s main reflector.

No. 29 Stirring Up the Milky Way: Dynamical Dark Matter and its Observational Implications

No. 1 Exploring the Iterated Prisoner’s Dilemma with Cards 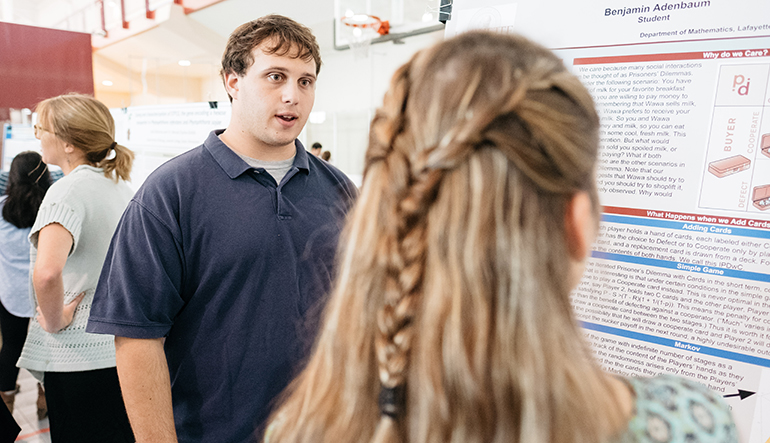 Play along with us for a moment: If you and your buddy are arrested, what’s the best outcome for you personally? Should you rat out your co-conspirator to get a lesser sentence or stay silent and risk him turning on you? If this occurs one single time, it’s always in your best interest to betray the other person so that you walk. But if it’s played out over and over again, then there is more likelihood that you’ll cooperate. Benjamin Adenbaum ’19 took this game, called the “prisoner’s dilemma,” and applied it to other scenarios, including a card game to see if two people will coordinate their activities to achieve the best possible outcome for both. He applied math theory and found that if the game has an indefinite number of stages, it’s likely you’ll be more concerned about the future payoff (“I could win the next hand”) than the current one (“I could win this hand”).

No. 8 Microbes and Mud: Preliminary Results on Bacterial Resistance to Cadmium in Merrill Creek and BoRit Ecosystems 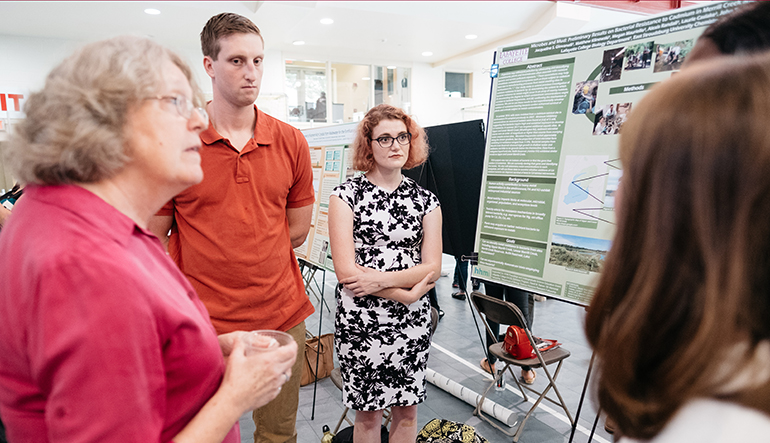 Students braved unseasonably cold waters and worked painstakingly to collect sterile sediment samples in search of bacteria that have developed resistance to cadmium toxicity. Cadmium is a naturally occurring metal, but in high concentrations from mostly industrial pollution, it can interfere with aquatic organisms and pose risk to human health. This foursome’s field work examined characters like velocity and flow of water while collecting sediment from habitats as varied as a Superfund site and a nature-preserve area, and from both shallow and deeper locations. Although it was June, since discharge is from the deeper waters of Merrill Creek Reservoir, “The water was so cold that our muscles were cramping up, so we had to wear special insulated gloves,” says Megan Mauriello ’19. Maintaining dexterity while ensuring sterility of samples was a daunting task, but the team rose to meet it. Back in the lab, the students, who were advised by Laurie Caslake and Nancy Waters, analyzed their samples and were surprised to isolate a putatively cadmium-resistant bacteria from largely unpolluted Merrill Creek. Might this reflect naturally occurring cadmium, or could the concentrations tested need to be raised? Mauriello cited such hypotheses as part of the learning process. Next step? To bring field work into the lab for experiments that examine whether resistant bacteria inoculated into tanks containing aquatic plants and animals will withstand or even thrive when cadmium is introduced. Stay tuned!

No. 9 Development of Nutrient Rich Crystals from Wastewater for the Fortification of Compost 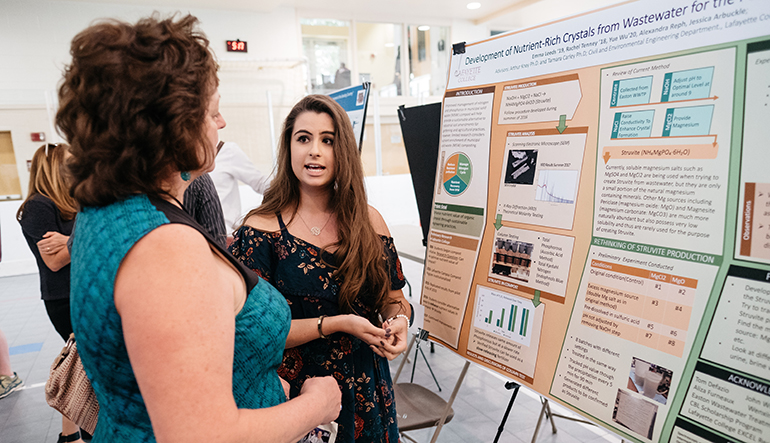 What’s better than undergraduate research? Starting that research in high school. Alexandra Reph is interested in a degree in engineering. As she looked at Lafayette, she read about the programs and faculty. Fascinated by Professor Art Kney’s research, she contacted him. She was shocked that he replied. More shocking? He invited her to join his summer project. Excited to be in the lab and do research, she knows more about struvite than most of her peers. A naturally occurring compound, struvite is expensive to produce but the perfect fit to help create nutrient-rich, slow-releasing compost to replace fertilizers that contaminate waterways.

No. 10 Student Migration and Economic Growth 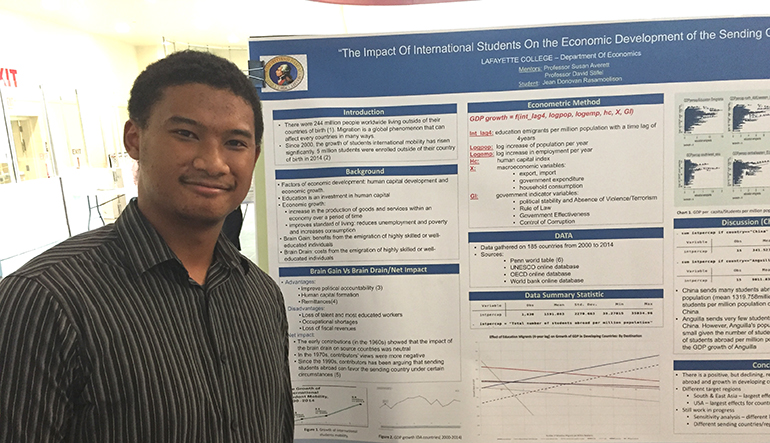 There is a positive economic development impact on home countries of international students who study and possibly live abroad. What surprised Donovan Rasamoelison ’19 was that the measurement scaled to the population of the country. So if fewer students were overseas as compared to the population, the impact was negative. If there were more students overseas as compared to the population, the impact was positive. But, as Professor Susan Averett noted, that benefit then slowly declined. Personally, Rasamoelison was most surprised by the lack of policies from sending countries. Nations might consider whether students should return home after completing their studies. He thinks their countries would benefit from their return. If students remain overseas, those benefits may only impact the students’ families. He himself plans to return home to Madagascar after graduating and share his knowledge for the common good.

No. 11 Transcription and Analysis Protocol for Indigenous Japanese Drum Patterns

No. 19 A Comparison of Techniques for Counting Museum Visitors 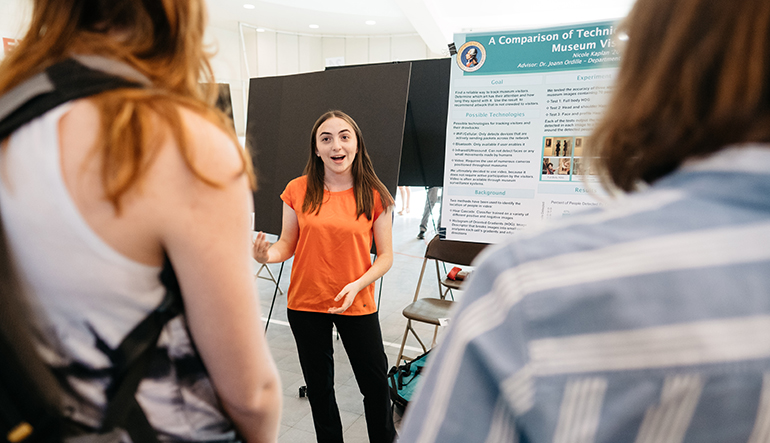 Museums can easily count guests, but can they track what art attracts their attention or how long it captures their gaze? Can they then recommend works of art to specific guests who gaze at certain pieces and, in turn, better manage crowds? While analyzing video seems best for capturing this information and requires combining and inventing techniques, Nicole Kaplan ’20 was most excited by the trial and error of the research process. She sees how different that process is from classroom exercises. Investigations that took a few weeks would fall flat or new questions or bigger problems would develop. Take it from her: Open source software may not be the future of computing. So buggy! And beware: She was also shocked at how many cameras are available to track a person’s movements. She did so much with so little footage.