Sitting in the center of a table is a gallon-sized Ziploc bag filled with Rice Krispies, Cocoa Puffs, and Fruit Loops. Your task is to separate the three cereals without using your hands. Instead you may use the tools in front of you: paper bowls, plastic bags, tongue depressors, straws, toothpicks, scissors, and tape. 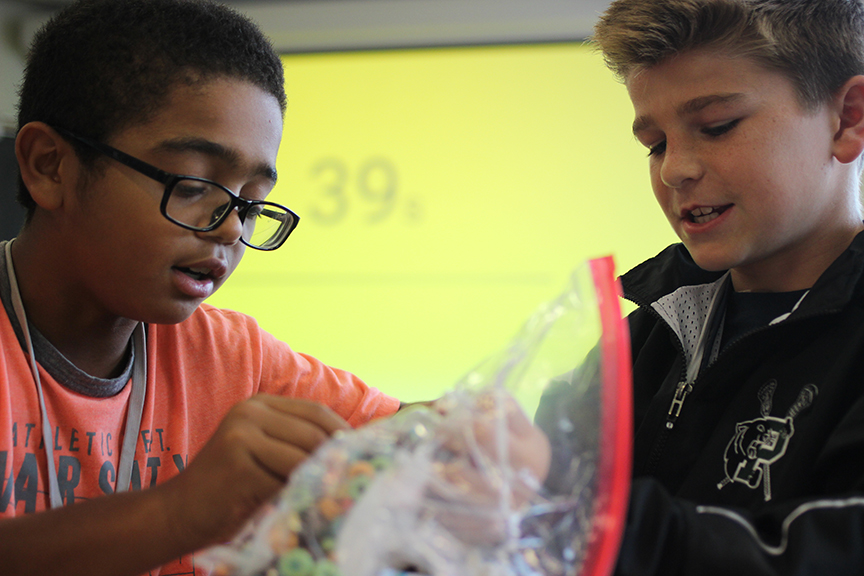 To up the ante, the cereals have values with Rice Krispies worth the most. Your team has five minutes to develop a process to most effectively and efficiently separate the cereals. Begin.

Lindsay Soh, assistant professor of chemical and biomolecular engineering and Kate and Walter A. Scott ’59 Scholar in Engineering, gave these instructions to students from Easton Area Middle School.

The sixth-, seventh-, and eighth-graders set to work. The sixth-graders immediately grab a straw and poke it into the corner of the gallon bag. Only two Rice Krispies fall out. They pause to reconsider.

The seventh-graders are talking about funnels they could build while the eighth-graders begin panning for gold. Using two paper bowls, they pour the cereal into the top bowl and sift the puffed rice through small holes they cut. Rice Krispies start filling the second bowl. 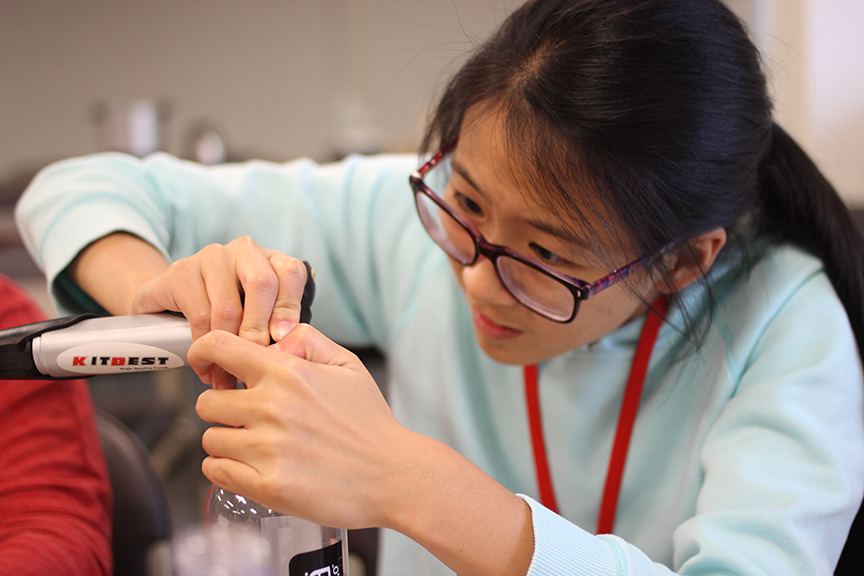 At each table a few Lafayette engineering majors assist the groups. The seventh-graders construct an elaborate funnel while the sixth-graders begin to copy the eighth-graders’ sifting technique.

While the clock ticks down, Soh keeps smiling. Earlier in the day she introduced the students to her work in energy. She asked them to think about what they use energy for and where that energy comes from. Studying renewable fuel sources, Soh described her research in biomass, or as she said, a “fancy word for plants.”

“I study plants like algae, sunflowers, and canola to see how they can be cultivated, harvested, extracted, and converted into fuel,” she says. “So the module you will study today with me will focus on separation.”

The time is down to the final minute. The seventh-graders abandon the funnel and begin to sift. The eighth-graders have a big bag of Rice Krispies while the sixth-graders have nearly caught up. 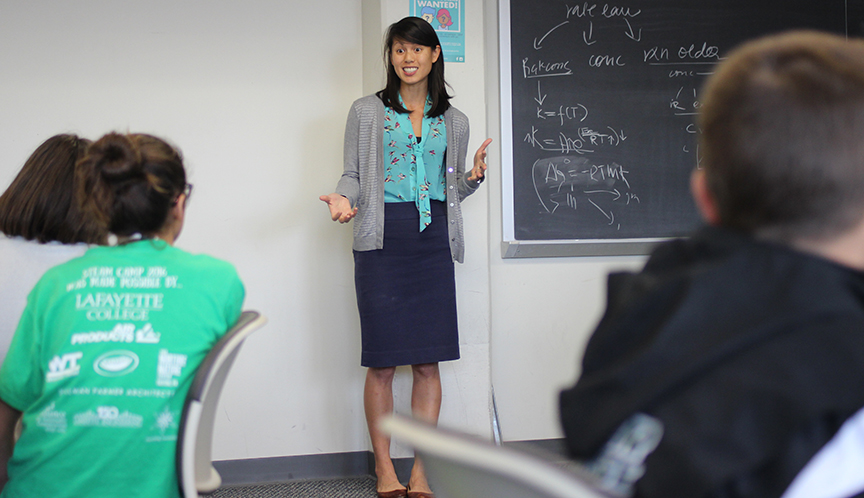 The Lafayette engineering students call time and begin to measure the bags while Soh engages the class in discussion. They talk about each group’s strategies, properties of the cereal that could have increased their success, how values impacted their approach, and scaling the process to bigger operations.

One of the 7th graders says, “We were overthinking this and need to remember that sometimes the best answer is the simple answer.”

Soh nods and then says goodbye.

Outside the door is another group of students waiting to separate cereals. The 29 middle school students are on campus today, selected by their math and science teachers and the honors program coordinator. They are doing hands-on work that seems appropriate for our times: studying the energy we create, the air we breathe, and the water we drink. 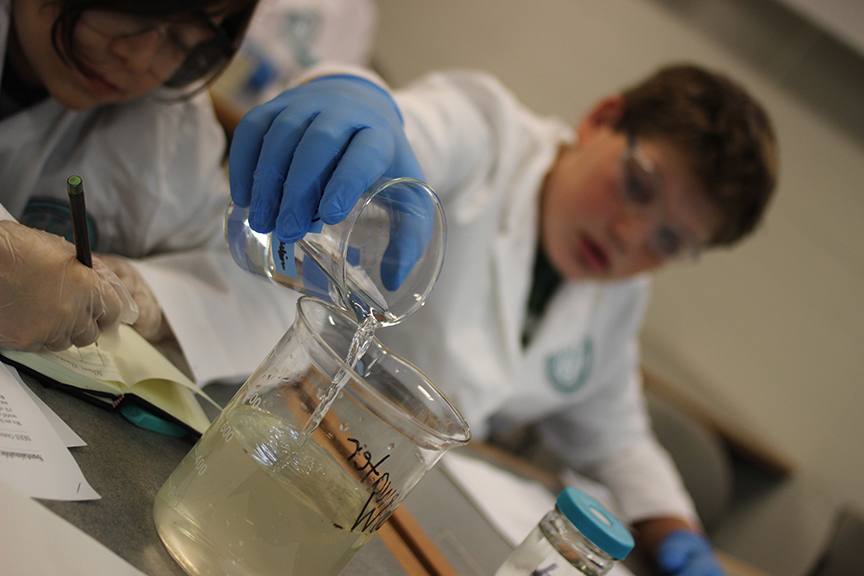 “Today you should think like scientists,” says Art Kney, associate professor of civil and environmental engineering and director of the Center for Community Engagement. He is leading the water module.

Three of Kney’s students in the room help the middle schoolers don laboratory jackets and gloves. When dressed, students start talking about wastewater.

Considering that only three percent of the water on the planet is fresh and only one percent of that is accessible, it would seem that the 300 gallons used daily in the average American household is a real resource, especially the amount that goes down our sinks, shower drains, and toilets.

“It’s time for us to rethink wastewater,” says Kney. “It can become a resource that waters our land, grows our plants, and generates new forms of energy.”

Three beakers sit in front of student groups. One is wastewater, rich in nitrogen and phosphorous, elements to most fertilizers. The challenge before the students: Isolate and remove the elements.

Kney has figured out how to do just this in his research. The students pour in magnesium chloride and give the wastewater beaker a stir. Next, they pour in sodium hydroxide. The water gets cloudy. 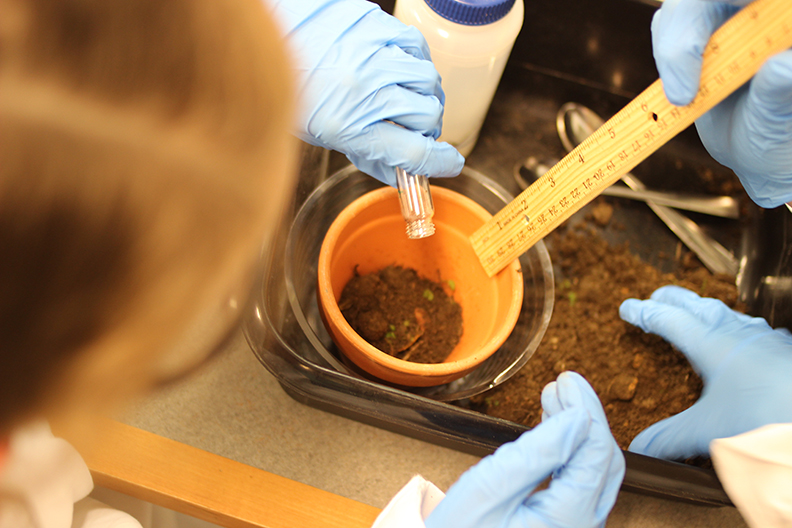 “It is forming struvite,” says Kney. “Remember, this is the nitrogen and phosphorus fertilizer we can extract from wastewater. It will take a day for it to fully form and then settle at the bottom of the beaker.”

Rather than make the students wait, Kney and the Lafayette engineering students hold up vials of struvite powder of various shades. The students then get to test it. Each group has a terracotta pot, some soil, and a pumpkin seed.

The groups plant their seed and sprinkle the soil with struvite powder.

Carrying potted plants, the students head to the final module: clouds in a bottle. 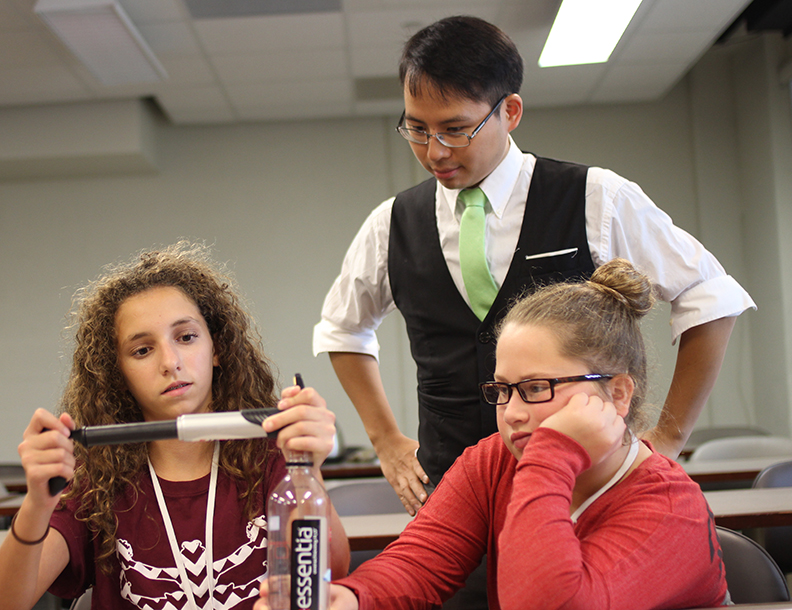 Dressed in a lime green tie that matches his lime green Converse sneakers, Joseph Woo, assistant professor of chemical and biomolecular engineering, is talking about the properties of air.

In one hand, he grabs a water bottle that has a few droplets of isopropyl alcohol at the bottom, the stuff in the towelette that nurses use to clean a shoulder muscle before a shot. In the other hand, an air pump.

After attaching the pump to the bottle, he gives the bottle a few quick pumps. With the snap of a wrist, he removes the pump. Presto! A vapor cloud fills the bottle. The students gawk in shock.

Woo reminds the students of what is in our air: nitrogen, oxygen, carbon dioxide, water vapor, and chemicals.

“How might those components impact our atmosphere and the clouds formed?” Woo asks. “We are scientists! Let’s find out!” 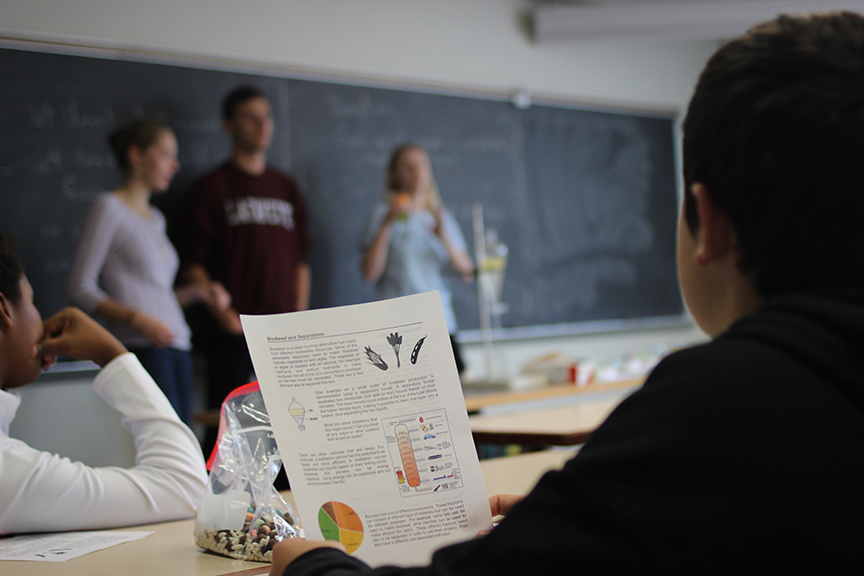 Like in the other modules, the Lafayette engineering students are helping. In this case, it’s by getting pumps attached to bottles.

The middle school students start making their own clouds and rating the results. They make clouds with rubbing alcohol, bottled water, and then smoke-filled water. Woo and the Lafayette engineering majors strike matches and add the smoke to the bottles.

“Think of the wildfires in California,” Woo says. “Those fires affect weather activity and climate. If we are to understand our climate, we need to know what is going on in the atmosphere.”

The smoky water makes better clouds than the water alone.

“Because it is easier if the water can cling to particles,” a student says. Woo nods his approval.

Then the students try warm water with smoke. Before they leave, Woo reminds them that clouds form with higher temperatures, particles in the air, and water droplets.

Soon all the students gather together to recap their day. Of course, as young learners, they are a bit giddy with being on the college campus, missing regular classes, talking with students, eating pizza, learning from professors, and touring the building.

When asked what they took from the day, they repeat what they learned about air, water, and energy. Then some dig deeper.

“I learned that negative things can be turned into positive things,” one student says.

“I learned to think about things in a different way,” another says. “Things I might take for granted.”

The last sums it up: “I liked meeting cool science people who use engineering and apply knowledge.”