On the Hill for Homecoming, Amanda Pisetzner ’10 brought news of her latest hardware: an Emmy Award. She collected the prize for Outstanding Breaking News Story (start the video at the 55-minute mark), not during the Sunday night primetime broadcast but rather two nights later on the night dedicated to news and documentary features. Producer for VICE News and former producer for VICE News Tonight on HBO, Pisetzner sat down to talk about her career, the new statuette, and life after Lafayette.

Where are you going to keep the Emmy?

I think in the bathroom, actually. I read a story years ago after Kate Winslet won her Oscar that she decided to keep it in her bathroom to offer visitors the opportunity to quietly and privately practice their own future acceptance speeches. I remember thinking that was pretty meaningful. Yet again, maybe I shouldn’t say the “bathroom plan” publically; I don’t want people to think I’m demeaning the statue with its placement. It certainly won’t go on the toilet.

Do you have room for it in the bathroom in your NYC apartment?

I have space enough for one award. So I just can’t win another. 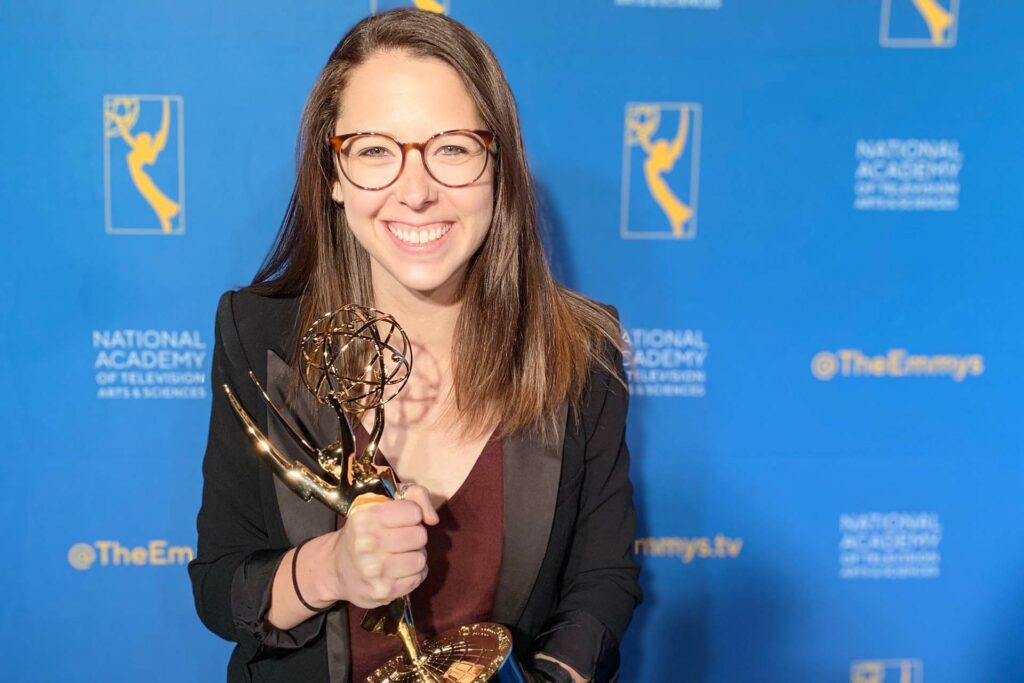 Did you anticipate the win?

Definitely not. VICE News Tonight has been on the air for less than three years and VICE as a news division is still fairly young, at least compared to some of our counterparts at ABC, NBC, CBS. The news landscape is super saturated and can be really intimidating; impressive work comes from lots of places. So it was a great and welcome surprise. We were all pretty excited about the 19 nominations, let alone the six wins. That itself is super validating for us.

Many may not be familiar with VICE. Who are they?

VICE began as an alt magazine in Toronto in the early ’90s and has since grown into an international media company, a film studio, a cable channel, a record company … there’s a lot going on. VICE News came online in 2013, and I joined three years later when they launched our nightly newscast on HBO, VICE News Tonight. We recently announced that the program is moving to Viceland (our cable network), announced a partnership with Showtime, which I’m pretty excited about, and, in the meantime, lots of longform documentary reporting, news reporting, and digital video. We’re headquartered in Williamsburg, so Brooklyn is now where I both live and work, which I really enjoy.

How do you approach news at VICE?

I think the answer to that question evolves every day and depends on what we’re working on. When we launched VICE News Tonight, for example, we operated under a few assumptions. The first is that our generation—and our audience—isn’t finding out what happened in the world when they come home and turn on the nightly news at 7:30 anymore. We’ve been getting the tweets and the alerts and the news tickers all day. So if we’re not rushing to be “first to air” with breaking news, and we only have a 25-minute show to program for, we get to be discerning with what we report. We get to cut through the noise a little bit and make sure that whatever we’re reporting, we’re adding value to the conversation. The second assumption is that people would rather learn about what’s going on in the world from someone they can relate to. So instead of an anchor behind a desk, VICE just finds really smart folks who look like and talk like our audience to help explain what happened and why it matters, as if you’re two pals sitting over a pint at a bar. I could go on, but mostly, news should be accessible. People are smart, and we’re going to hustle to try to do news differently than some of the other major networks.

How has that approach challenged you?

When I interviewed for the role back in 2016, our executive producer told me that he could see me helping cover economics or public policy. Me who couldn’t (and still can’t) add two numbers together without using my fingers. I felt compelled to tell him then that I didn’t really have an econ or policy background, but he didn’t see that as an impediment. Reporters and correspondents were hired to own their beats, and producers were hired to help translate those ideas into compelling and visual storytelling. Looking back, it was a great strategy. The people I work with really know their stuff, and my role as a producer is to make sure our reporting is synthesized in a way that a discerning but not expert audience could appreciate and enjoy it. 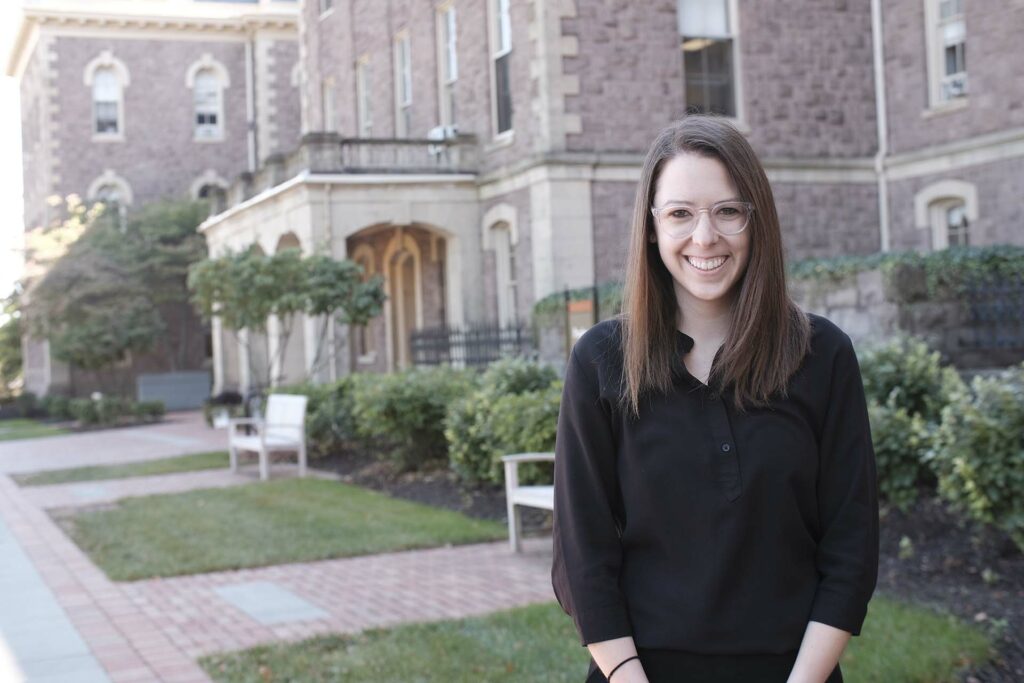 Definitely! I think Lafayette helped me get to where I am in a few obvious ways, and a hundred smaller, subtle ways. Majors ways: My majors, English and a self-designed major, studies in equality and social justice, taught me to write and shape stories and how to communicate effectively. The interdisciplinary nature of my major (and Lafayette broadly) taught me to be fluent in the studies of people, which in turn has helped me relate to and understand those who are different than me. And there’s the fact that the first two jobs I got out of school came from Lafayette connections—first at a nonprofit and later as an NBC page. The subtle ways aren’t always obvious, but I find myself being thankful all the time about the opportunities that I had to lead teams, travel abroad, conduct research alongside my professors—all of which were opportunities that Lafayette awarded me during my time here.

What was your pivotal career turning point?

Definitely becoming an NBC page. It was my dream job early on that I deferred because of a self-created notion that working in TV was akin to being an astronaut, so I would need to pursue something more realistic. And then my page position at NBC parlayed into a staff job at NBC News’ longform, nonfiction company where I spent the next four years making a bunch of different shows for NBC and non-NBC properties. I think in total I worked on somewhere around 34 projects during that time—and that was a huge era of growth for me professionally.

What does a news producer do?

That’s a good question because “producer” is a weird title that can mean a thousand different things depending on who you ask and where they work. For me it’s a combo of team leader, project manager, editorial partner, and journalist. But the best way to think about it is when you’re assigned a story as a producer that it’s your baby from pitch to air. So when we’re filming, I’m in the field, working with cameramen and camerawomen to help develop the story’s visual language and aesthetic. Are we using tripods so the story feels more settled? Are we handheld because we need to be able to pivot quickly to catch something unexpected? I help make interviewees feel comfortable being vulnerable in front of a camera. At the end of shoot days I’m media managing all the footage we’ve shot and taking time-coded notes. When we’re back in the studio I’m helping to script. In the editing suite I help make decisions on visual coverage, archival, and graphics. It’s a whole thing, and I could go on because I really love my job, but I’ll just say it’s a lot of fun, and I get a lot of support along the way.

Tell me about the piece that earned you an Emmy.

It was what we call a quick-turn or day-of-air piece on the Kavanagh Hearings called “Moment of Truth: Kavanaugh and Ford.” We had a few days to prep but essentially made it in real time over the course of the day and aired it that night—which is why it was up for Breaking News. We sent out correspondents and producers across the country to watch this moment unfold with people who had something to say about it in real time, and even though it was constructed quickly, there were pretty deep conversations. A lot of people helped make it happen. People will often say TV is a team sport, and they’re not wrong. That piece won because everyone hustled to make a cogent and smart documentary news piece in mere hours.

What are you working on now?

I’m not sure if I can talk about it on the record yet, but I’ve been working on a doc about, let’s say, cyber crime. That’s all I should say without checking with a few folks back at the office. But lots of exciting things to come!

What about other pieces you’ve made?

In an unexpected plot twist, I’ve actually spent a lot of my time at VICE covering education policy though I’ve done my share of others too. Some of my favorite education stories have come from Oklahoma where I helped cover their transition to a four-day school week, the growth of teacher activism, and the exodus of teachers leaving the classroom. I’d say my favorite non-ed story as of late was a piece about pro-life trainings for students in Texas. It was remarkable to see how young people consider their pro-life views alongside other social justice movements, and I think the piece shows just how organized and intentional the greater pro-life movement is becoming by helping train the next generation of pro-life leaders.

So what has you back on campus?

I was asked a few months back to be a trustee associate on the Board of Trustees, so this weekend is my first meeting. The Lafayette community is important to me and has also been very good to me, so if there are small ways I can be helpful, I’d like to be. In that way, it was a pretty easy yes when the chair of the board called me up!