Last summer, Mailinda Hoxha ’19 encountered the remnants of a dark, desolate prison in the thinly vegetated mountains of northwestern Albania, where back-breaking labor at the hands of a brutal communist regime often led to physical exhaustion and death.

Mining copper was a way of life for her father, Elez, for 17 years, a dire existence that began the moment he heard a harsh, aggressive rap on the door while preparing dinner one night. Members of Albania’s secret service tore him from his home after falsely accusing him of spreading negative views of the government and its policies.

“My father stood there, speechless, as the soup he had served himself for dinner grew cold on the kitchen table,” Hoxha says. This wasn’t the first time Elez had been a prisoner of state. In 1945, at the tender age of 4, he was sent to a concentration camp along with his family, which they endured for 25 years.

Because her father belonged to a family of means, the government perceived him as an intellectual and threat to the communist order. The government executed Hoxha’s grandfather and his brother when her father was just 2; his mother died of pneumonia soon after.  He and his three sisters were raised by his grandmother in the small village of Pac in the Tropoje district of Albania.

Hoxha’s visit to Spac, perhaps the most notorious of all political prison camps in communist Albania, revealed the pain, constant surveillance, and inhumane treatment her father and thousands of other political prisoners endured.

“A truly emotional and unreal experience. I saw a vulnerable side of my father that I had never witnessed before,” she says. “He always deemed this part of his life too difficult to impose on my young mind, but he finally opened up about the pain he faced.”

Accompanied by her father and cousins, Hoxha walked around the crumbling gulag with gray masonry flaking off its walls, passing signs labeled “kitchen,” “bathroom,” “line up area.” She tried to imagine hundreds of people crammed into tight spaces under constant watch by armed uniformed guards.

“It seemed impossible to imagine strangers in such a confined space, let alone think of my father, the man standing next to me, being forced to live, work, and eat here for 17 years,” Hoxha says. “I had imagined what this prison would look like my entire life. I naively imagined a cold, steel, sleek building. But instead, I was met by a decaying institution whose walls were left half hanging standing up. The signs still gave me chills because it made it all real.”

A first generation student, Hoxha (English and government & law) only had to summon her father’s experiences at Spac as a coping mechanism to find her way at Lafayette. 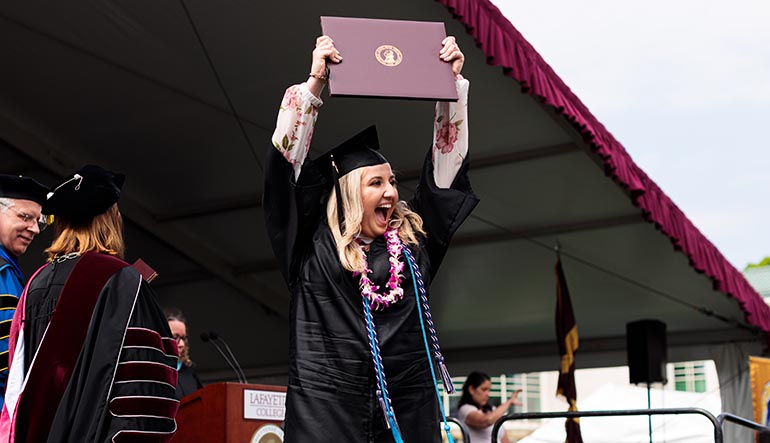 “We can learn from life’s severe circumstances and know that deep down, despite whatever life throws at us, we are stronger than we can ever imagine,” says Mailinda Hoxha, who plans to pursue immigration law as a career.

In her sophomore year, Hoxha tore an ACL while practicing choreography for a fundraiser sponsored by her sorority. She pushed through, thinking her knee would heal. Instead the injury progressed, producing pain and discomfort, and her knee locked into position and required emergency surgery.

Hoxha retaught herself how to walk, which enlightened her on the resilience of the human body and spirit.

“Life events like this broke me down mentally and physically,” she says. “Enduring these events and experiencing life as a first gen student caused me to lose myself several times throughout my college career.”

During the tough times, she sought solace in her father, who would recite a serenity prayer to her throughout her childhood: “God grant me the serenity to accept the things I cannot change, the courage to change the things I can, and the wisdom to know the difference.”

After seeing Spac, she now understands why that prayer has always meant so much to her father and why it has been a guiding star for her.

“I have continuously tried to figure out where I belonged in this community. While I am not a person of color as I am of eastern European descent, I don’t exactly identify myself as an American either despite being born in New York City,” she says. “This is mostly because I was raised in a traditionally Albanian household, with parents who did not attend college due to the political conditions of their home.”

Never looking at that as a struggle, she viewed it as an opportunity to develop independence.

“My dad’s experience is what actually pushed me to take this alternate view because he spent so much of his life being independent and figuring out how to respond to his life’s circumstances,” Hoxha says. “And never once did he give up.”

After finishing his sentence at Spac, Elez Hoxha escaped Albania as the regime collapsed in the early 1990s. With members of his family, he moved to Yugoslavia and worked in a Belgrade kitchen for four months with his nephews. He met and married his wife, Nexhmije, after his escape.

After he was granted political asylum, he moved to New York, where he stayed with a family member while learning English and attending classes.

“He studied vigorously and was soon fluent,” allowing him to become a translator for the New York State Workers’ Compensation Board, Hoxha says.

Father and daughter light up a room whenever they’re together. Elez’s eyes sparkle and he flashes an infectious grin as he looks on Mailinda, his only child.

Graduation day was as much a day of celebration for the Hoxha family as it was a time to look back, through moist eyes and halting, emotion-driven words, and take stock of how a hard life gave way to a promising start for Mailinda.

“This is something wonderful,” Elez said. “I had a very, very, very hard life, but I see wonderful things in my daughter. God had the power to save me, and now my daughter can become a good citizen and build a good society. I didn’t have these opportunities. It is with her now. Only God knows what the future holds.”

“To this day, you will never hear him complain or discuss his struggles in life because he has cultivated the ability to focus on the positive aspects of his life,” says Mailinda, who plans to pursue immigration law as a career. “It’s a skill that I would argue we all struggle with sometimes. We can learn from life’s severe circumstances and know that deep down, despite whatever life throws at us, we are stronger than we can ever imagine.”

As he and family made their way toward Fisher Field, Elez turned and said firmly, “I am a fighter, and will fight till my last breath.”