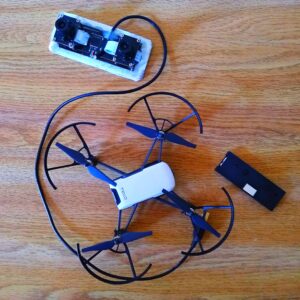 It’s 4 a.m., and the smoke detector outside your bedroom has quit as a small fire starts in the adjacent laundry room.

No ear-piercing alarm to jolt everyone out of bed, but a drone is quietly on patrol, sniffing out the source of the fire and extinguishing it as everyone sleeps. It could be the next generation of home fire safety.

October is National Fire Prevention Month, a good time to chat with Khaknazar Shyntassov ’23 (electrical and computer engineering) about his work on developing a computer-based firefighting system that uses a drone to put out home fires without causing extensive water damage.

Following are excerpts from a conversation with him regarding his research and plans after Lafayette.

What inspired your research on the firefighting drone?

I was surprised when I found that the cost of damage from residential fires in the U.S. rises by $200 millions of dollars every year from 2014. This damage is not only the result of a fire but also of existing solutions. Water sprinkling systems, which spray water all over the room, not only damage a building but also are not efficient in extinguishing a fire’s ignition source, thus allowing small flames to turn into a major fire. This problem inspired me to design a drone-based firefighting system, which determines the exact location of a small flame and extinguishes it instantly.

Have you developed a working prototype?

Yes, I developed a working fire’s location detection algorithm and implemented it on a small commercial DJI Tello drone. Testing of my system was done in the dorm room. Because of safety concerns, I didn’t use a real fire, but instead used simulation of fire on my iPad. Testing metrics, such as intersection over union measurement, showed that the algorithm is accurate at detection of fire’s location in the room. However, developing a fire extinguishing system, like a water sprinkling system, was not part of the research scope. Together with former Prof. Jon Wallace, we plan working on it next semester.

How long does it take, from the moment of detection, for the drone to put out a fire— seconds, minutes?

Over the summer, I’ve conducted several tests, and average overall performance time is 2 minutes and 20 seconds for a 700-square-foot apartment. Fire detection and distance calculation takes, on average, 1 minute and 3 seconds. Average time execution for drone’s movement is 1 minute and 17 seconds, with a distance of 10 meters between base station and target room.

Does the drone carry a supply of fire suppressant? If so, how much?

No. This is one of the development tracks that the research project will take in the future. Together with my professor, we are planning to create and incorporate a fire extinguishing system to our existing model. Different fire suppression materials can be analyzed and a refill system will be designed.

It seems like the drone would be ‘on call’ at all times, searching for a house fire. Seems this would be far better than a smoke alarm, yes?

Yes. Moreover, our solution provides less water damage compared to existing systems, such as water sprinkling systems. It is also especially efficient in houses that are remotely located, where firefighters need longer time to respond. Our drone will be able to extinguish small flames without turning into major fire.

What’s the potential to scale up this technology for home use?

Because of the low cost of equipment needed to install a drone-based firefighting system and its high efficiency, this technology can be used in our houses.

How much would a firefighting drone cost?

Estimated cost for this system is $549 for a 700-square-foot (standard two bedroom apartment). The cost for a water sprinkling system is $2 to $4 per square foot, which will cost at least $1,400.

What has excited you the most about this project?

I was excited by the challenge of working on my project in the circumstances where laboratories were closed. This really pushed me to think outside the box—mainly, how to figure out where to get all the necessary equipment and how to test my system. In circumstances where contact with the professor was limited, this project helped me to experience solving unfamiliar and complex problems independently.

What are your plans after Lafayette?

I am thankful for Lafayette’s EXCEL research program since it enabled me to work on an independent project as a first-year student. This research opportunity made me realize that I want to focus my career on research and development in engineering. Right now, I am reaching out to fellow Lafayette electrical engineering alumni, and I am still in the process of exploring various career paths.