Five years ago, attending college in America was just “a fairy tale” for Narindra Andrisoamampianina ’23. Having never traveled outside of her hometown of Antananarivo, Madagascar, Andrisoamampianina—like other Malagasy students who have studied at Lafayette—comes from a very different socioeconomic and cultural background.

English was her third language. High schools there often have fewer resources and very large classes. Madagascar is also one of the most impoverished countries in the world and not all schools are equipped with the sophisticated technologies found in North America. 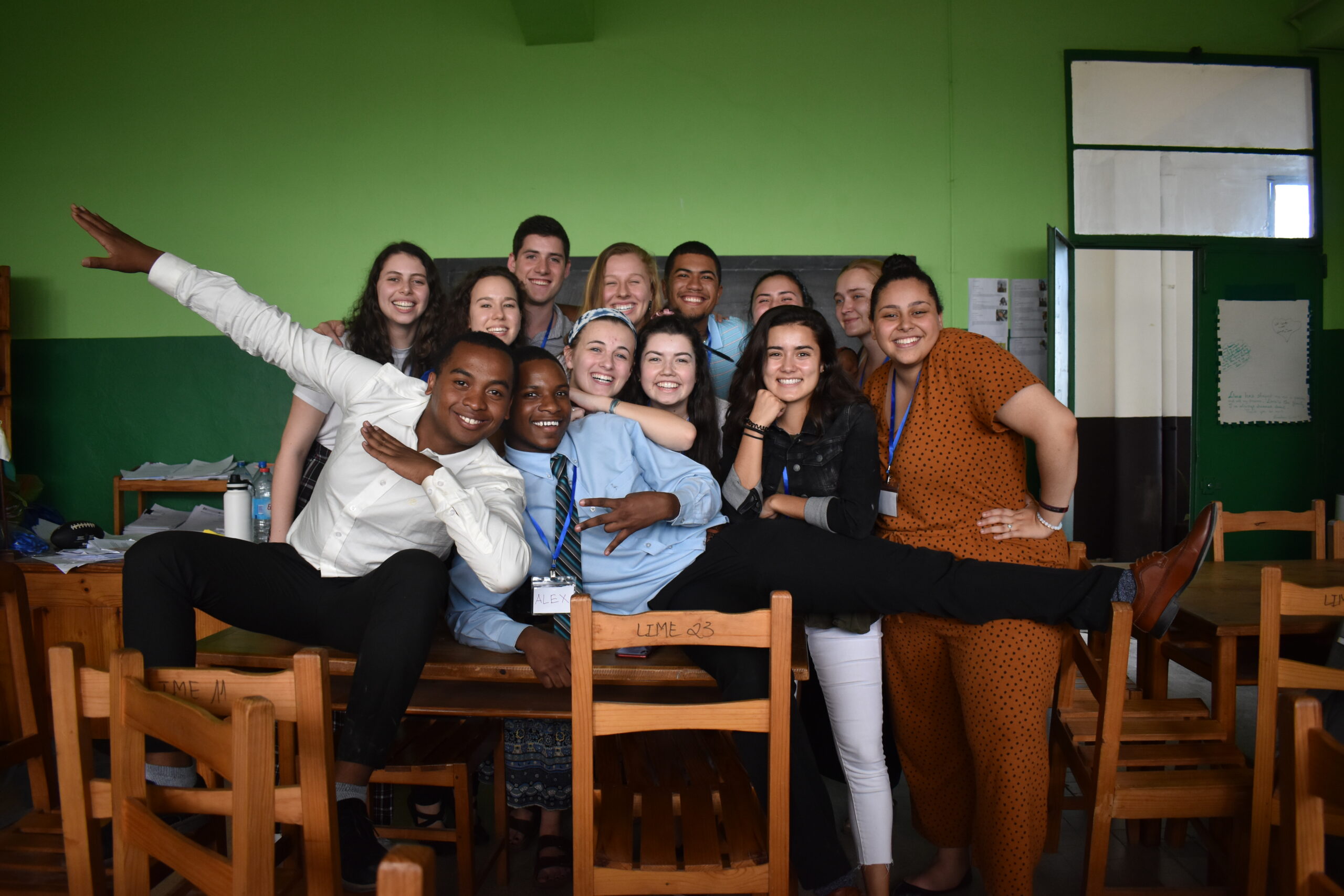 Lafayette students work as peer mentors at Madagascar high school as part of the LIME program.

Which is why Lafayette students voluntarily making the trip there—with plenty of supplies in hand—completely changed Andrisoamampianina’s academic journey at her high school, Lycée Andohalo. 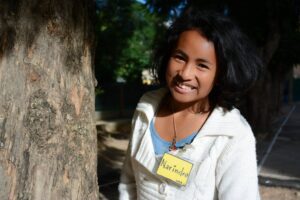 Narindra Andrisoamampianina ’23 was originally a LIME mentee student in Madagascar and is now studying at Lafayette.

“I was selected [to take part in the program] at the end of 10th grade, based on my GPA and my grades in math and English. I was told that I would have to take the SAT and the TOEFL (Test of English as a Foreign Language) tests, and complete the application, and that’s not easy. It took three tries for me to achieve a score high enough to apply to Lafayette,” she says. “But on the other hand, I felt so blessed. It’s amazing to think that these students came from so far away to teach at a public school—which never happens in real life.”

It’s been a decade since David Stifel, professor of economics, first took a group of students to Madagascar for what would ultimately become the Lafayette Initiative for Malagasy Education (LIME). The peer-to-peer mentoring program between Lafayette students and high school students from Madagascar prepares the latter for the process of applying to U.S. colleges that provide financial aid for international students.

Each academic year, a team of 12 Lafayette students are nominated by faculty members to formally commit to mentoring Malagasy students over a one-and-a-half-year period, which includes a three-week trip to Madagascar.

This initiative, which focuses solely on Malagasy students, is still the only one of its kind among U.S. colleges and universities.

“This particular program has brought eight Malagasy students to the U.S., and they’ve all come to Lafayette. We’ve had one student [arrive] each year, so right now we have a senior, junior, sophomore and first-year students,” shares Susan Averett, Charles A. Dana Professor of Economics, who has taken the trip four times. “This is a brilliant program, and it’s remarkable on Lafayette’s part because these are students who require full financial aid. It changes their entire life. Lafayette has made an investment in these Malagasy students, and the Lafayette students themselves have made an investment. I think that’s really amazing.”

While the January 2021 trip has been canceled due to travel restrictions associated with COVID-19, this year’s team of Lafayette students will continue to mentor the Malagasy students virtually. 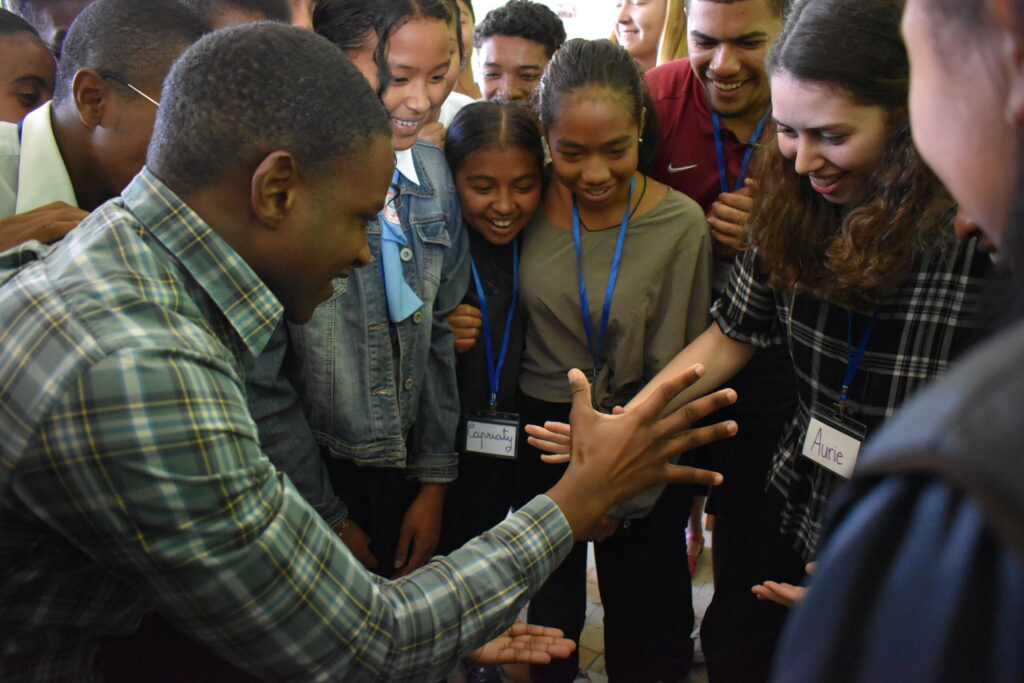 Aurie Greenberg ’22, right, participates in a group exercise with a group of Malagasy students at Lycée Andohalo.

Roots of the program

When R. Niels Marquardt served as the U.S. ambassador to Madagascar from 2007 to 2010, he began to realize that Malagasy students were severely underrepresented at American colleges and began reaching out to those colleges one by one. A letter he sent in January 2008 to then-Lafayette President Daniel Weiss, aiming to increase the level of educational exchanges and institutional linkages between the two countries, provided Stifel with the opportunity to follow up during a research trip to Madagascar.

Because a number of roadblocks existed for these students—particularly the cost of education and travel, as well as language and testing barriers—Stifel (along with then-dean of advising and co-curricular programs Erica D’Agostino) decided to take a three-week trip to see if it would be possible to bring the training to them. 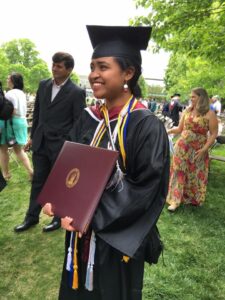 Rebeka Ramangamihanta ’16 graduated from Lafayette with a degree in economics and international affairs.

The inaugural LIME trip in 2010 offered an opportunity for Malagasy students to get a different type of education than what is offered in the French system, to broaden their horizons and create more opportunities for them. The first group of mentors paved the way for Lafayette’s first Malagasy enrollee, Rebeka Ramangamihanta ’16, to come to campus in fall 2012.

“Many of my mentors, professors, and Lafayette staff have, in one way or another, been involved with and have been big supporters of the LIME program. It is those people who saw my potential from the beginning,” says Ramangamihanta, who recently completed a master’s of development practice at University of California at Berkeley. “They challenged me and pushed me to always give my best. They helped me even before my arrival on campus and supported my transition to this foreign land. The LIME community was one of my important support systems throughout my undergraduate experience.”

“The most obvious impact of the program has been on the Malagasy students who have come to Lafayette. I am so proud of all that they have accomplished,” says Stifel. “But the broader impact is on the LIME community in Madagascar. They are active in learning English and developing their cross-cultural awareness. For those who may never leave Madagascar, these skills will nonetheless be important. Further, the LIME students in Madagascar are doing their own outreach and having an even broader impact.” 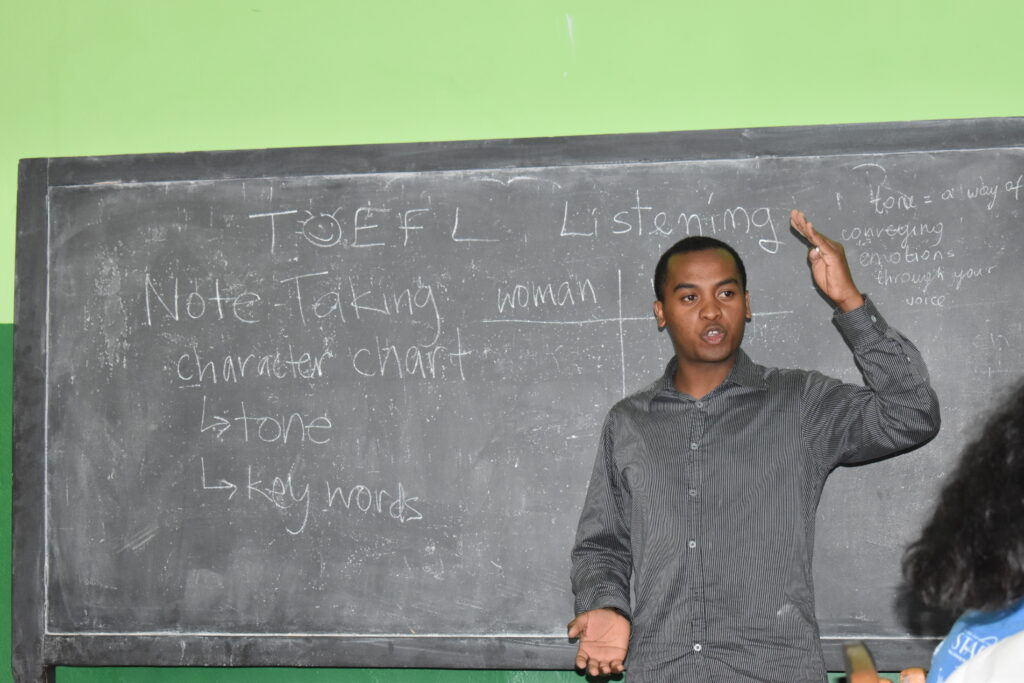 Tafita Rakotozandry ’22 teaches a group of LIME mentees at their high school in Madagascar.

A successful partnership between Lafayette and Lycée Andohalo would not have been possible without the tireless efforts of Vatosoa Raharinosy, an English teacher at the school who voluntarily stepped up to serve as its first-ever career counselor. Raharinosy mentors top students to prepare them to apply to

universities in the U.S., and through counseling and extracurricular activities, she inspires students to take their education to the next level. She not only works with students to improve their English, but she also prepares them for standardized testing and mentors them in their own personal development.

“Vatosoa has worked tirelessly to organize the Malagasy students at the Lycée and continuously advocates for them. She is such a good-hearted person who wants the best for the Malagasy youth and for the Lafayette visitors,” says Stifel, who nominated Raharinosy for a grant to participate in the Study of the United States Institute (SUSI) program for Secondary School Educators at University of Montana. “She is remarkably creative in finding ways for her students of limited means to be successful despite the lack of resources available to her.”