By Kathleen Parrish and Bryan Hay

Seifollah “Seifi” Ghasemi first heard of Lafayette College in 1959 when he was one of nearly 6,000 high school students applying for only 30 spots in a new program at Iran’s Abadan Institute of Technology.

He was just 15, two years younger than the other students, when he was selected for a prestigious scholarship to attend the Engineering School at Abadan, located on the Persian Gulf, 1,500 miles from his hometown of Mashad in northeastern Iran.

Ghasemi now heads Air Products, a leading global industrial gas company, and he holds a deep kindred connection to Lafayette, which not only provided his early education in engineering but also helped shape decisions made throughout his long and distinguished teaching and executive leadership career. 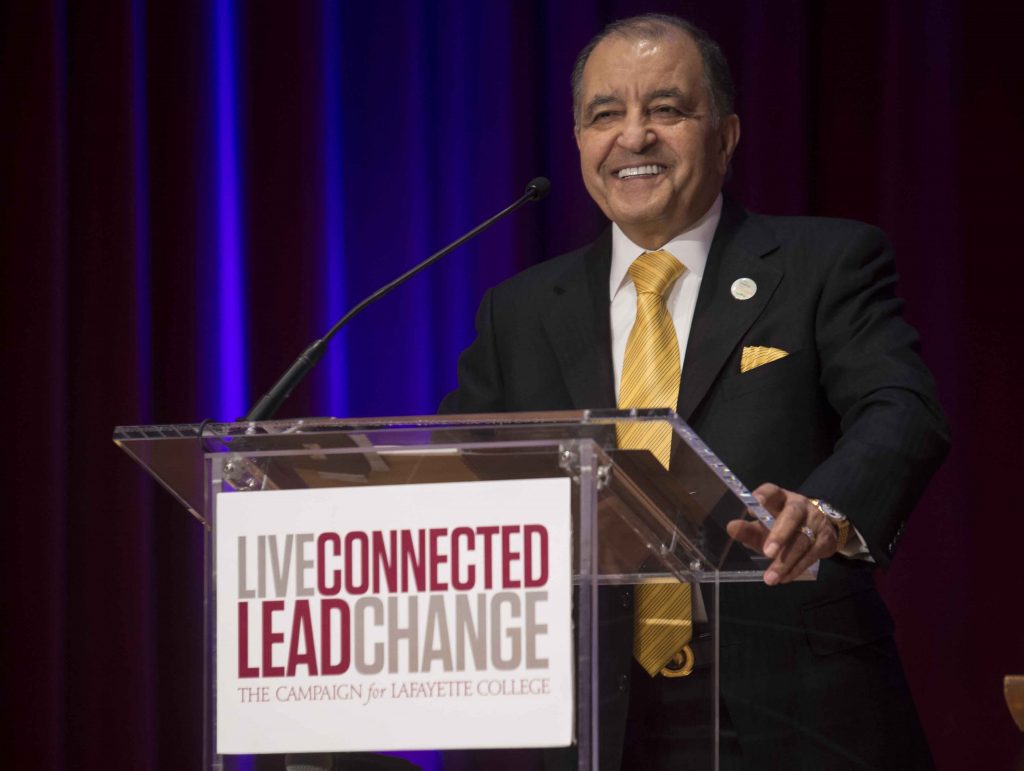 The purpose of the scholarship was to train talented Iranians for work in leadership positions in the oil industry; Abadan had the largest oil refinery in the world at that time.

While his previous public school training was based on the French model, the classes in Abadan were taught in English. The program was established in partnership with Lafayette (1956-67), and Ghasemi came to know many of its faculty members and administrators.

A few years before his arrival at Abadan, a consortium of Iranian oil exploration and production companies had reached out to Lafayette for ways it could best meet the needs of Iran’s oil industry. On the recommendation of the College, Abadan instituted a six-year general engineering program, and Lafayette alumni were installed as chancellor and president of Abadan but also taught everything from biology to public speaking to engineering graphics and social psychology. Because students came from all parts of Iran, they were housed in dormitories, and extracurricular activities were provided as part of their overall education.

At Abadan, the faculty-to-student ratio was 3-to-1, and for the first two years the curriculum focused exclusively on humanities.

“History, English, philosophy, poetry, all of the things that are most important,” says Ghasemi, who equates the liberal arts component of his education with his professional success. “It taught me how to connect the dots and fundamentally think through a situation. It makes you a well-rounded and more interesting person.”

It also amused his engineering friends at Tehran University, where humanities were not part of the curriculum. “ ‘You are reading Shakespeare?’ they’d ask in disbelief. ‘What does that have to do with building a bridge?’”

Ultimately, however, many of the grads of Abadan ascended higher in their careers than those from Tehran University, Ghasemi says. “If you’re a leader, you have to be able to communicate and articulate your strategy,” he says. “It doesn’t matter how intelligent you are. If you’re not trained in a formal way to think about things …”

Like Lafayette’s Easton campus, extracurricular activities were part of the experience at Abadan, and Ghasemi complemented his studies with playing soccer (he was captain of the team), basketball, and performing in Shakespearean plays.

Ghasemi fondly remembers one instructor in particular, William A. “Bill” Kirby Jr. ’59, who arrived in Iran as a recent Lafayette graduate to teach English at Abadan.

“Professor Kirby wasn’t much older than many of his students at the time, but he was wise. In many ways he was like a brother to us,” Ghasemi recalls. “He stressed the importance of collaboration, athletics and being part of a team, and teamwork in the makeup of a leader. After all, even as a CEO, if you aren’t working as part of a team, who are you going to lead?”

During the summer, students worked at the refinery, first alongside mechanics and inspectors, until their senior year when they were running the refractors in the control room. “I have an appreciation for running a plant and what the operators actually do,” he says. “It’s given me the ability to talk to the shop floor person as well as the CEO of one of our customers. I’m very thankful for that education.” 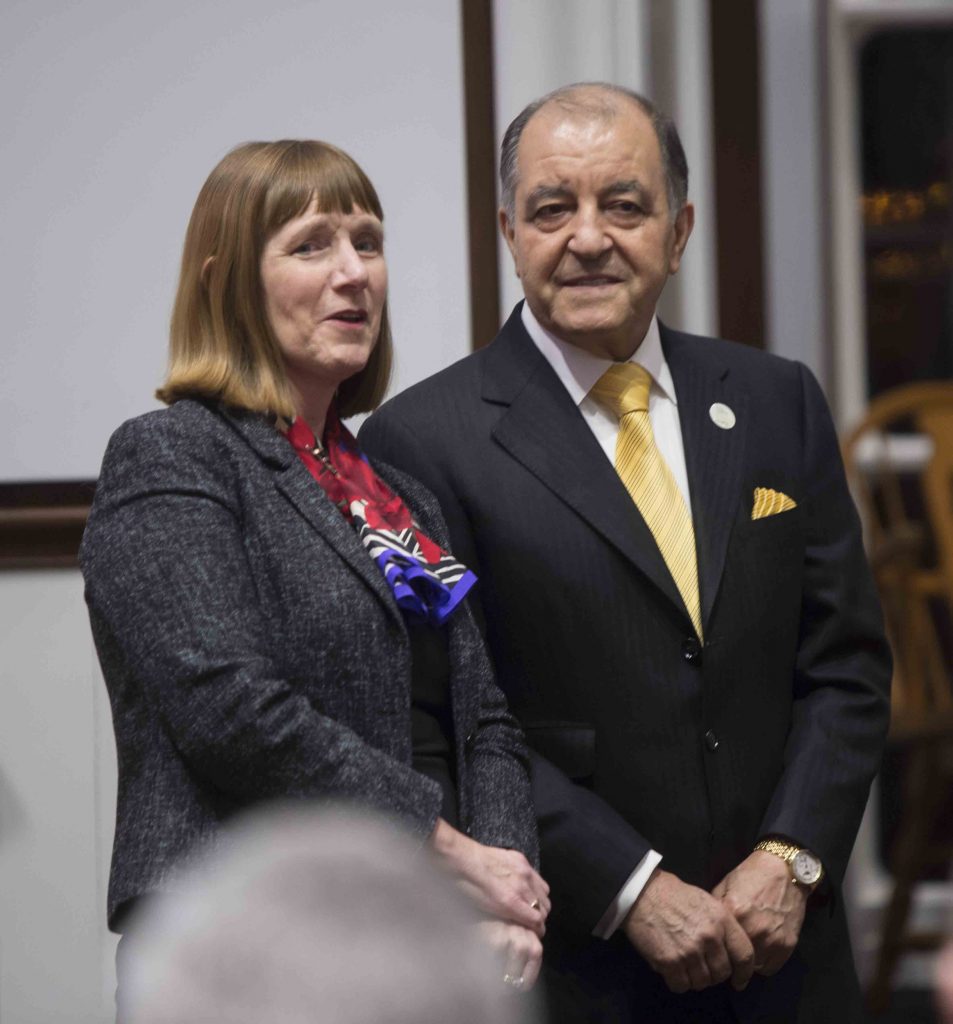 Ghasemi graduated Abadan at the top of his class in 1966 with a B.S. degree in general engineering. He then studied at Stanford University, earning an M.S. in mechanical engineering with a specialization in aeronautics and astronautics, and began a Ph.D. in fluidics in 1967.

Ghasemi met his wife of 48 years, Ellen, while in Palo Alto at Stanford University. They live in New Jersey and have a son, Robert Gregory (Bob), who graduated with a B.A. from Allegheny College and an MBA from Krannert School of Management at Purdue University.

After Stanford, Ghasemi was employed by Lear Motor Co., where he focused on alternative steam-propulsion systems for cars and trucks. Years later, he would advocate for electric cars when he headed Rockwood Holdings, then the world’s largest producer of lithium for batteries.

Following his work at Lear in the United States, Ghasemi returned to Iran and took a job in 1970 teaching fluid mechanics at Arya Mehr University in Tehran, becoming vice chairman of the mechanical engineering department by 1973. In 1974, he joined the newly formed National Iranian Steel Industries Co. and three years later became executive director. However, in 1979, when the Iranian Revolution erupted, Ghasemi came to the United States with his wife and young son, leaving everything behind. He became a proud U.S. citizen in 1982.

“I came here with nothing,” says Ghasemi, who was appointed to lead Air Products as chairman, president, and chief executive officer in 2014. “There are not many countries in the world where you can start with nothing and be given opportunities based on your ability.”

With emotion and affection, he often looks back upon his extended Lafayette family at Abadan and his experiences there and proudly considers himself a Pard to the core.

“It benefits me every single day,” Ghasemi says of his Abadan/Lafayette educational experience.

Ghasemi credits Lafayette for the education he received at Abadan. Now as CEO at Air Products, one of Lafayette’s most enduring corporate collaborators, Ghasemi and the Air Products Foundation have endowed a faculty chair in engineering, and associated facilities, dedicated to interdisciplinary teaching.

Gifts totaling $3 million—$1.5 million from the Air Products Foundation, $500,000 from Ghasemi, and a $1 million anonymous donor matching gift—were announced last night by President Alison Byerly, before Ghasemi stressed the importance of humanities to every curriculum—including engineering—when he delivered the President’s Entrepreneurship Lecture to a capacity audience at Colton Chapel.

Ghasemi’s arrival at Air Products in the Lehigh Valley seems an appropriate twist of fate, bringing him close to his adopted alma mater, and to a time and place that have allowed him to express his gratitude.

A recipient of an honorary degree from Lafayette in 2017, Ghasemi has visited Lafayette several times since his appointment at Air Products, the global industrial gases company based in Trexlertown, Pa., in operation for more than 75 years.

Scott Hummel, William Jeffers Director of the Engineering Division, recalls one particular emotional encounter at Skillman Library last year, when Diane Shaw, special collections librarian and College archivist, shared with Ghasemi a collection of Abadan memorabilia, including his yearbook, which had a photo of him on the soccer team.

“Seifi saw pictures of his classmates. Many of them were lost in the revolution, and he hadn’t seen them since 1979 when he left all of his possessions in Iran while fleeing to America,” says Hummel. “He was visibly moved by the collection we have.”

Last semester, Lafayette helped arrange a reunion with Seifi and Kirby, whose experiences at Abadan inspired him to become a foreign service officer. “Seifi had not seen Dr. Kirby since he graduated,” Hummel says. “This was truly a remarkable moment to witness.”

“Ghasemi embodies the Lafayette ideal of an interdisciplinary engineer with the ability to think broadly and see opportunity where others do not,” Hummel says. “And it all started with the deep connections he made with Lafayette faculty when he was a student at Abadan Institute of Technology.”

“Through Abadan, Lafayette gave me not just an education, but also the vision to take a broad look at opportunities when making decisions throughout my career. The curriculum established by Lafayette went beyond teaching just the necessities of engineering. It taught me how to think and to consider how to solve real-world problems in the way you live your life,” Ghasemi says. “Now, it is an honor and a privilege for me to give back to Lafayette and to say thank you.”