Meeting a future employer in a blouse or suit and tie is standard. Sweat pants? Unfathomable in the real world, but possible in a Zoom-centric, pandemic world.

Despite any opportunities to be casual, students were all business at Gateway Career Center’s annual career fair. This year’s event was a high-tech virtual reality marvel.

Guests entered a virtual space that might feel like any event: a bustling lobby filled with banners from major sponsors, an exhibition hall resplendent with booths, an auditorium for a keynote address, and even a lounge for catching your breath.

The night kicked off with sage advice from Cornelia “Cia” Buckley Marakovits ’88, president and chief investment officer at Dune Real Estate Partners. Her keynote didn’t disseminate the in-depth advice students could get from Gateway.

Instead, she focused her remarks on the practical advice she wished someone had told her, like “not just coming to work every day and doing the job but illustrating how your hard work is making the job easier for others.”

In addition to hard work, she provided a few more nuggets about the power of connections and the importance of resilience. 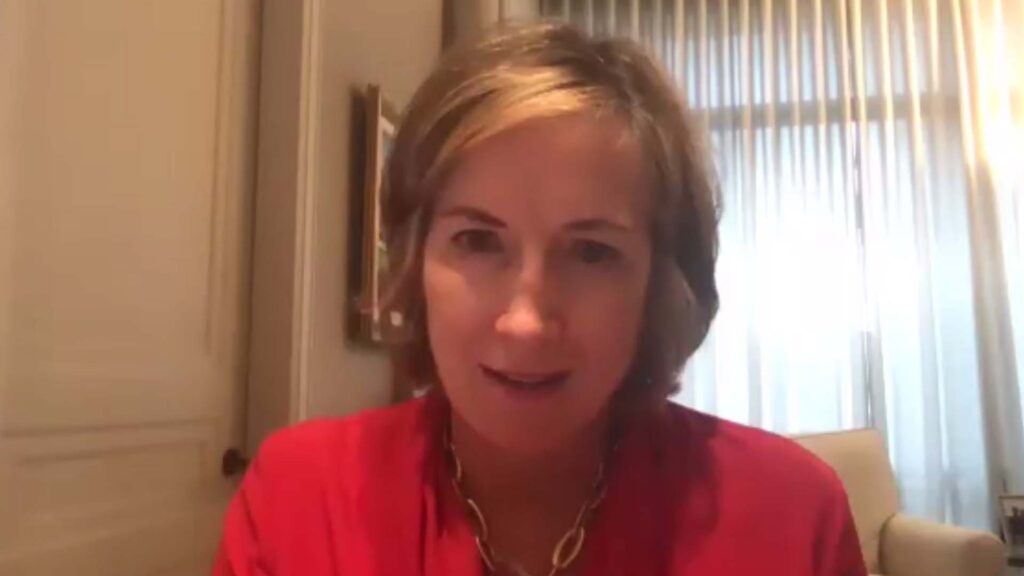 Following her talk, students could chat with her, get a confidence boost in the lounge by speaking with a career counselor, or dive into their mission in the exhibition hall.

Mission: Exhibition Hall … That’s where Natalie Booth ’22, Colin Shalk ’22, and Megan Deacon ’21 demonstrated their prowess. Each had worked with career counselors prior to the event to make the most of the fair by preparing a résumé, pinpointing key employers, and preparing for interview questions.

Shalk, a mechanical engineering major, was concerned going in about the format, thinking about how different it would be online than in person. He was pleasantly surprised with how easy the interactions became as he spoke with Turner Construction and Victaulic.

“My chats with recruiters seamlessly turned into video calls,” he says.

Deacon, who was across the Atlantic, has gotten used to the late night lectures from her home in England. She had attended the career fair last year, which gave her a sense of what to expect, so she had two monitors running—one with her talking points and another for chatting.

“The platform was impressive,” she says. “I never felt like I was in a Zoom room. It truly felt like a virtual space where I could walk between booths and rooms.”

As a history major and president of the Women and Law Society, she was glad for the range of industries present so she could talk with potential employers.

Employers too were basking in the fun of the platform while staying focused on finding top talent.

Vanessa Youngs ’07, assistant vice president-manager at Moody’s Investors Service in the public finance group, was warned by her colleagues in the campus recruiting office that some virtual fairs can be hard to navigate.

That wasn’t the case.

“This was very cool,” she says. “I appreciated the break from Zoom and loved the lobby that almost looked like Farinon. Having the ability to go to the auditorium for the speaker and then back to the booth really made me feel like I was at a career fair.”

Youngs has served as a College champion. “Moody’s has worked with our rival in the past, but as a Lafayette alumna, I stressed the need to travel a bit down the road. Lafayette students are well prepared and eager to learn. Our two interns last year made strong impressions in their interviews and in our first virtual internship.”

Also feeling those champion vibes was Kidane Kinney ’15, who interned at the Solidarity Center after graduation and returned to work there this year as a program officer in the Asia department. She hadn’t attended the career fair since she was a senior but remembered Lafayette alumni who were helpful in providing advice and answering her many questions.

“I wanted to return to the career fair and serve as a resource to answer student questions,” she says. “It’s clear in speaking with them that they are being thoughtful about their post-college futures and are deliberate in their research about prospective employers.”

Stacy Halliday, lead recruiter at Air Products, also shared the excitement for the platform. “The student participation and engagement exceeded our expectations,” she says. “The platform enabled us to connect with talented students leading up to our virtual interviews for fall hiring.”

Jake McTighe ’14, superintendent, Turner Construction Company, saw his booth swarmed by students. Despite the challenges of chatting with them all, he still felt positive. “All Lafayette students are showing their resilience considering the challenges that are being faced in 2020,” he says. “Additionally, Lafayette engineering students are poised to succeed in the construction management field because of their strong communication skills and deep technical knowledge.”

Sitting in an apartment in Lancaster with a few Lafayette roommates, Booth, an economics and psychology double major, was ready to shine. She had attended a preparation session so she’d be familiar with the virtual platform. While she is interested in economic policy, an internship in that area would have her headed toward Washington, D.C., a too far commute for her, so instead she used the event to target financial companies closer to New York City.

“My career counselor gave me great pointers so I could make good connections with alumni,” she says, “and make the most of my first career fair.”

Hard work, connections, and the ability to adapt in the face of change, the perfect blend of Marakovits’ advice was on full display as Gateway created a successful event, and students demonstrated their ability to prepare, woo, and keep it chill … in sweat pants.