Over the years, Prof. Mark Crain, former Prof. Nicole Crain, and students in various Policy Studies and Economics courses have engaged some of the nation’s leading experts on topics ranging from cybersecurity to immigration for televised news programs aired on a local PBS affiliate.

One of those experts just won a Nobel Prize.

On Oct. 7, Jennifer Doudna, professor of biochemistry, biophysics, and structural biology at University of California, Berkeley, was jointly awarded the Nobel Prize in Chemistry with Emmanuelle Charpentier for their development of CRISPR-Cas9, a genetic engineering technique to edit DNA. In May 2017, Doudna was the featured guest on Open for Debate, a program produced by Lafayette students, faculty, and PBS39, which explored the potential uses and ethical implications of CRISPR-Cas9.

“When I interviewed her, I recognized how monumental her work was but never thought to myself that she was going to win the Nobel Prize,” says Hannah Doherty ’19 (policy studies), who interviewed Doudna with Danielle Wolff ’17 (neuroscience) at The Franklin Institute in Philadelphia. 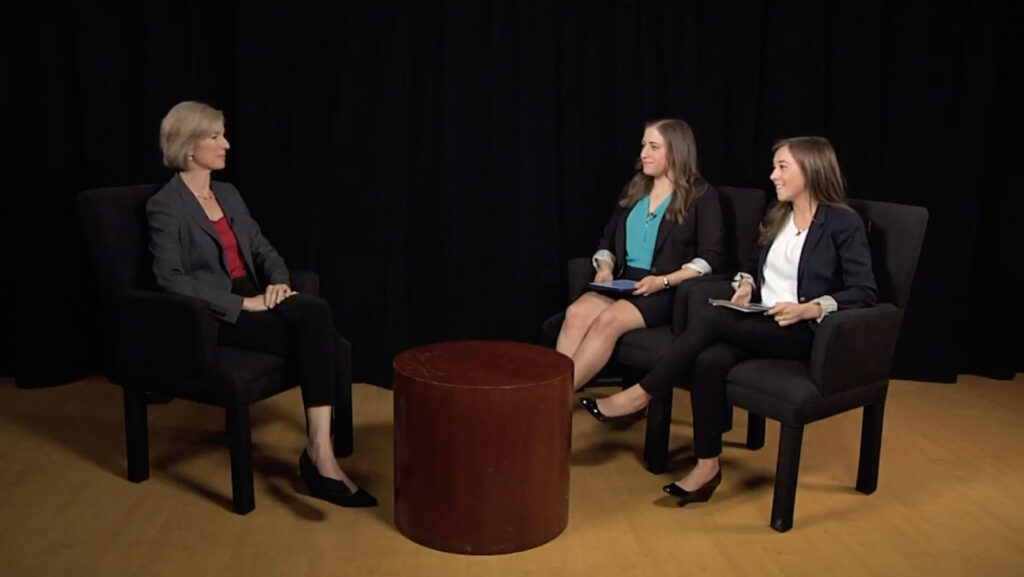 “When I heard the news, it put into perspective how remarkable and once-in-a-lifetime that experience was,” Doherty says.

Having the opportunity to sit down with Doudna and ask her questions about the groundbreaking technology that she pioneered “was an incredible and unforgettable experience,” she adds.

Mark Crain credits the origin of the idea to Donald E. Morel Jr. ’79. “Don was on campus for a Board of Trustees meeting, and he invited Nicole and me and our students to be his guests at The Franklin Institute where Dr. Doudna would be lecturing,” Crain recalls. The idea for the broadcast ballooned from there.

“We look for serious topics at the intersection of technology, business, and policy, and CRISPR-Cas9 punches all three buttons. At first, the students seemed a bit daunted by the complexity of the technology, but they put their considerable talents to plow and never looked back,” he adds.

“What stood out to me most from our conversation is Dr. Doudna’s altruistic goals for how this technology should be used,” adds Doherty, who works at Daversa Partners, a retained executive search and consulting firm for technology companies.

“While she recognizes that this technology can one day make it possible for there to be things like designer babies, she really intends for it to be used to do things like cure genetic diseases,” she says. “She finds it important that there are standards set and that this technology is discussed at the worldwide level—not just behind closed research lab doors. Since the interview, I have been following Dr. Doudna’s career and wish to congratulate her on this well-deserved recognition.”

Doherty recalls when Crain, William E. Simon Professor of Political Economy and chair of policy studies, proposed a few topics to cover, one of them being genome editing.

“I was the first to raise my hand and note that the majority of us didn’t have scientific backgrounds and were probably not the best people to deeply cover this complex and highly debated topic,” she says. “I have to hand it to Prof. Crain, who saw the potential and pushed us to do it, putting us on the cutting edge of technology and the future.”

Genome editing was not a topic or technology that Doherty or most of her classmates were familiar with prior to the spring 2017 semester.

“The idea of it sounded like something out of a science fiction movie,” she says. “We spent the semester researching and diving into this complex and highly debated topic. Everyone involved took it head on. I am extremely proud our episode provided a comprehensive overview of the genome editing treatment, including giving multiple viewpoints, which provided a fair and objective analysis.”

Working with Mark and Nicole Crain and PBS39 was by far the most cherished Lafayette experience for Natalie Gosnell ’18 (policy studies and Spanish), who anchored the 30-minute program with Doherty.

“It was extremely unique that students without any prior broadcasting experience, like myself, were thrown into the ring and provided the opportunity to not only represent Lafayette on a major television channel but also learn about extremely important and life-changing topics like CRISPR-Cas9,” she says.

If not for Lafayette’s partnership with PBS39, she would have likely been unaware of Doudna and her life-changing CRISPR-Cas9 technology.

“I’m so thankful for my experience working with Dr. Doudna, the Crains, and PBS39,” says Gosnell, who works at Cresa, a commercial real estate company that exclusively represents tenants and occupiers. “These moments are ones that will stay with me forever.”

Crain, along with Nicole Crain, who is now professor of economics at the National Defense University, formed a partnership with PBS39 in 2012 to produce coverage of the national elections. The partnership expanded since then and now includes Lafayette Lens, a half-hour series covering issues of global importance.