Conducting research, synthesizing it into a paper, and presenting those findings to your peers and mentors is standard fare at the College. Transforming that work into a website is less common. Doing the whole of it in six weeks from COVID-safe remote locations across the world seems almost a miracle.

Well, meet the miracle workers who participated in the Digital Humanities Summer Scholars (DHSS), a program of the Lafayette Libraries.

Students dove into a research question, scoured scholarly sources, watched that question evolve based on the research results, analyzed findings, wrote, revised, and then digitized their work.

Topics varied from the role the communist party played on the national agenda for Greek women to classical Cambodian dance in pop music to hate speech in social media about movies with Black casts.

Typically students would gather in Skillman Library over the course of May and early June, form a strong cohort, and grind on the work while supporting the ups and downs of fellow scholars.

Because of the pandemic, Angela Perkins, research and instruction librarian and director of the Digital Humanities Scholarship program, faced a big question: How do you achieve a group dynamic in an online space?

“It was different from years past,” she says. “There were many logistics to solve so we could collaborate, provide scholarly support, and be present to students’ needs. There was lots of improvisation and jumping online to talk, but I could not be more proud of the product they produced.”

Here’s a glimpse into a few scholarly projects and the process of making them take form online. 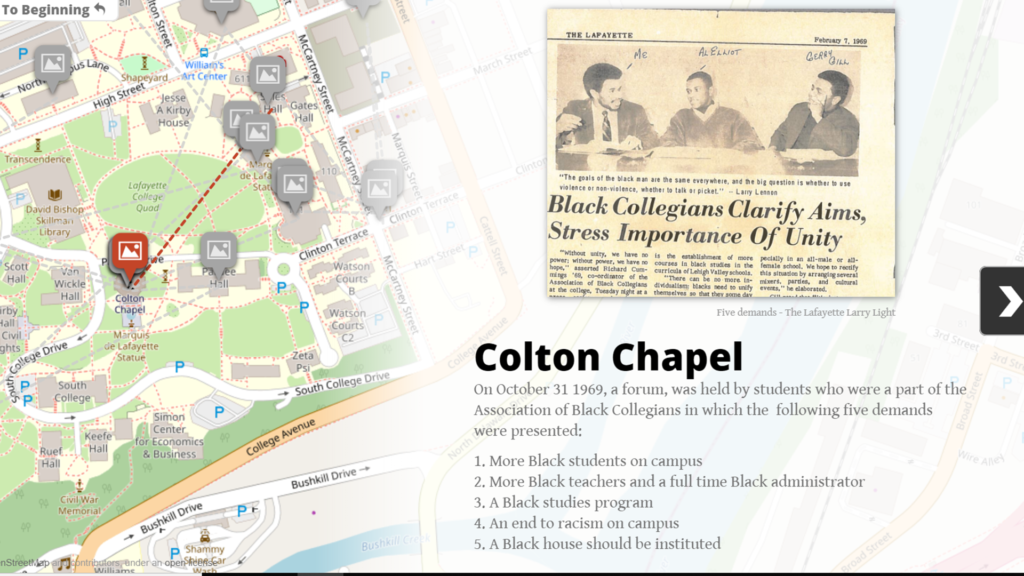 Research: Mapping black spaces on campus is not easy when spaces evolve, but Halal sought to illustrate the social geography that defines Lafayette. To do so, she had to research definitions of space and how institutions reinforce racism through space. At colleges, three distinct spaces exist: fortified, which are white and overtly racist; contradictory, which are intersectional and covertly racist; and counter, which are safe for brown and Black students. Tapping into an array of documents from the Association of Black Collegians (ABC), she then sought to create a story map for a hundred cultural and activist events.

Digitize: “I am not tech savvy,” Halal says, but she still managed to create two sites, one dedicated to her research and another to the timeline of events that occurred across campus. She spent a lot of time on the tools, changing mapping programs to best depict what she had.

Impact: “I am so glad I could make this come to life,” says Halal. She entered the program at the urging of Grayce Walker ’22 and previous DHSSers Jovante Anderson ’19 and Louis Wingfield III ’22. She also had the support of ABC. “Angela is amazing—all that she did and the resources she offered,” she says. “And the help from our student fellow Milena Berestko ’22 kept me on track.” Despite the challenges COVID presented, Halal says it was worth it.

“Indo-Guyanese women writers, though not often published, memorialized their lives, philosophies, and imaginings in short breaths …” 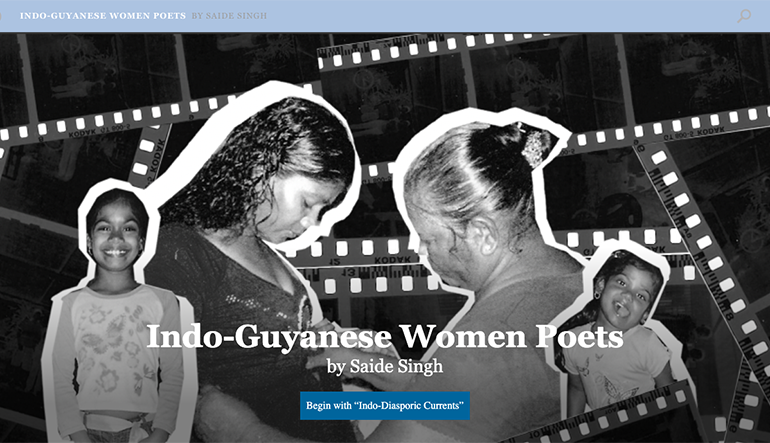 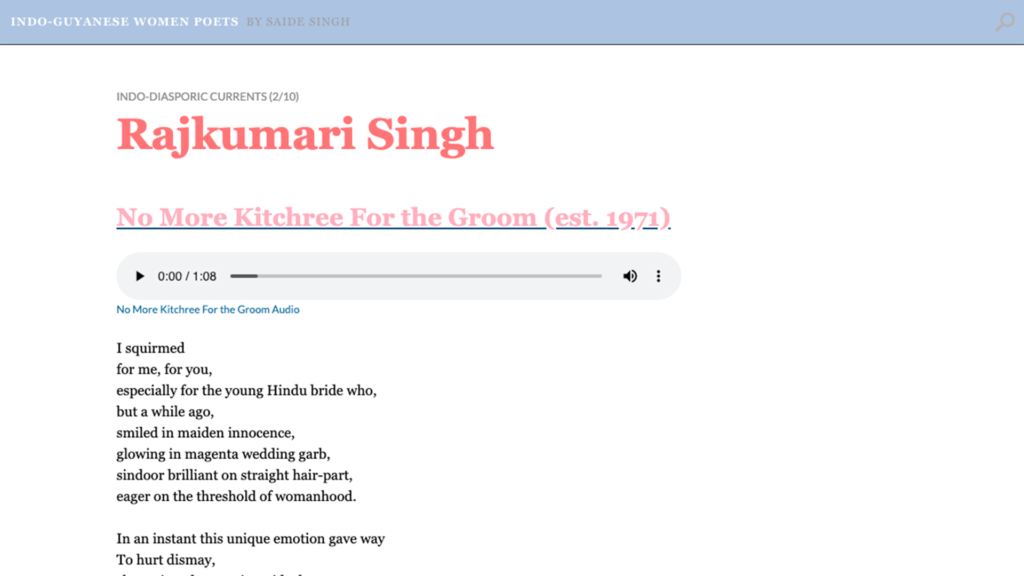 Research: The voices of Indo-Guyanese women poets are often unheard yet vital to understanding the history, culture, and experiences of the Indo-Guyanese diaspora. Singh began by tracing the legacy of Indo-Guyanese women through the research of Jeremy Poynting, founder of Peepal Press, who noted in 1965 that Indian people made up half of the Guyanese population, but Indian women accounted for less than 3% of all employees. “They are not well represented in government, academia, or social spheres,” Singh says. Finding female poets was even harder. They were not equitably published in libraries or anthologies throughout the late 20th century. Singh struggled as books were out of print and archives were not open or material was not digitized, so she searched online and contacted contemporary Indo-Guyanese poet Janet Naidu to learn more about her poetry and tap into her poetic network.

Digitize: “I had so much trouble with Scalar,” she says. “I had a vision in my head of an artistic, interactive, and grungy site, but …” Seems there are people who know how to do that work who are more skilled than “the hour of code experience” Singh brought to the project. “It was tedious, but once I was in a groove, I stayed with it.” But she is pleased with what users will see and access.

Impact: “There are so many savvy people at Lafayette who showed us how to use tools,” says Singh. “And other students were on this same journey, and to see where they started and what they presented at the end was amazing. We learned so much so quickly.”

“If an inaccurate presentation of these women surrounds us in popular culture, then it is more difficult to convince people of the gross injustices of the U.S. criminal justice system.” 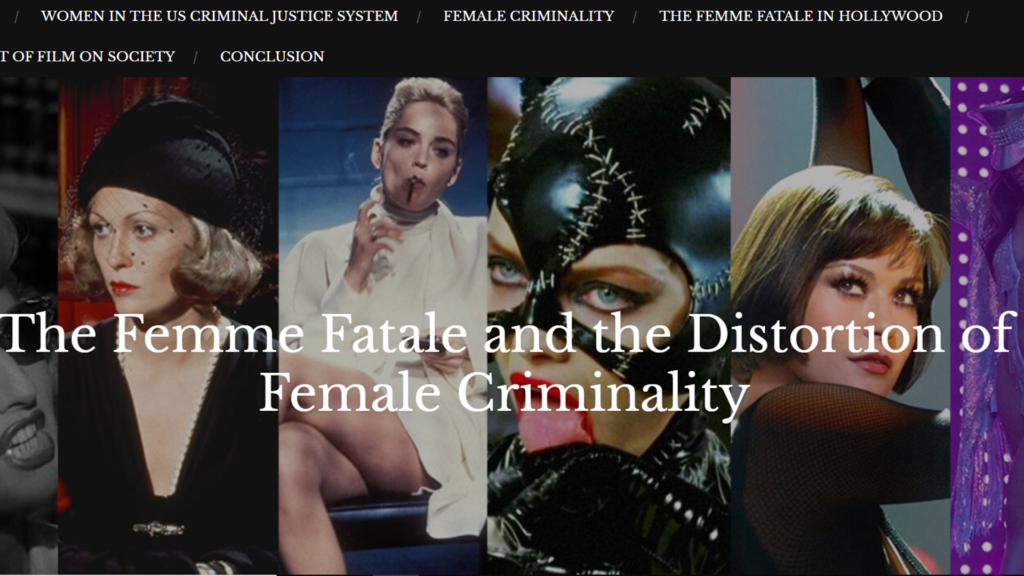 Research: The war on drugs led to many low-level offenders landing in jail for lengthy terms. Women, especially women of color, became the victims of such policies. Even as those policies came into question, women’s incarceration rates in U.S. jails rose by 15% from 2008 to 2018 while men’s rates fell by 9%. Deacon’s research made clear that drug and property crimes dominate incarcerated offenses spurred on by a childhood soaked in trauma and abuse. Hollywood seems to have missed this reality, portraying white women as violent offenders who are motivated by greed and rarely jailed for their offenses.

Digitize: Deacon had researched 60 films, but finding clips of significance of each was nearly impossible. While she had some experience with using WordPress, she found it tough when building from the ground up. Add to it the table data she wished to present. “I had data sets that were not easy to graph,” she says. But working with a librarian, Deacon used Tableau to present her data. “It was a long process,” she says.

Impact: “I have such respect for researchers and professors for what they do,” says Deacon. “It was hard and demanding.” But she appreciated the free reign to independently research an area of interest so deeply. “There was a sense of fulfillment when we were done.”

Here are links to other scholars’ projects:

Shirley Liu ’23
Chinablock: A History of Displacement and Development in D.C.’s Chinatown

Digital Humanities Summer Scholars program was made possible by a generous donation to the Lafayette Libraries from alumnus Bruce Marshman ’62.