“It’s time to shift the narrative about refugees,” Mohamed Malim, a Somalian refugee who came to the U.S. as a child, told viewers during his keynote speech sponsored by Lafayette’s Refugee Action (RefAct). “Refugees struggle and persevere. They symbolize hope.”

The event—where Malim spoke of coming to America, not fitting in, learning a new language, becoming the first in his family to graduate from high school and go to college, and starting two businesses—was one in a series of events Refugee Action has organized and made available to the public throughout the months that students have been working remotely.

The several-hour keynote allowed Malim to tell his story but also gave students the opportunity to ask questions about the refugee crisis and how they can help. 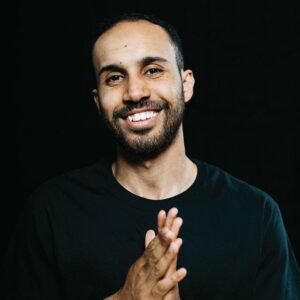 “Our members all stay up on the news and are generally looking into refugee issues. It often happens that a member will have seen someone that they think is really interesting. Our events chairperson, Anna Boggess ’23, found Malim’s website, and she and her mom both bought some of his company’s merchandise,” explains Lauren Phillips-Jackson ’21, RefAct president of events and outreach. “She told us that he does speaking engagements, and when we reached out, he said that the keynote was something he was interested in.”

Phillips-Jackson and Katie Kavanagh ‘21, RefAct president of resettlement—along with their officers—have been working as hard as ever the last eight months to fulfill the club’s mission of providing ongoing support for refugee families resettling locally. Since March, they have relied on virtual connections, weekly meetings, and a constant stream of messaging to continue aiding families in need and drumming up support for their cause.

The group connects with families through Bethany Christian Services’ Allentown branch and has constant communication with a BCS caseworker.

Where they would normally be meeting with families in person and offering everything from transportation to (English language) assistance to aiding with job searches, the group has had to rely on a vast majority of contact being over the phone or via messenger tools.

“Over the summer, we had a lot of challenges. We had a lot of issues with public transportation and relied on community partners, including some faculty and staff, but it was obviously understandable that with a pandemic going on, a lot of people just didn’t feel comfortable,” explains Kavanagh. “We limited contact with family members, but overall the goal is for them to have self-sufficiency in terms of government navigation, the health care system, education enrollment, and connections to the community. We’ve been really working this semester on getting all the families employed, so that they start being able to afford their bills and become financially independent.”

The resettlement legwork is just one part of what the club works on around the clock. The events and outreach portion is meant to inform their peers, the Lafayette community, and the greater Easton community about the immense diversity of the refugee experience. Along with the keynote event, these efforts included a four-part fall film series highlighting different aspects of a refugee’s journey. Club members also recently taught a group of middle schoolers as part of Lafayette Connect and are taking part in Our Beloved Community, a symposium for faculty, staff, and student leaders to take critical steps to enact global social change.

The club, which has around 30 active members, also managed to recruit 10 new ones—including six first-year students—during a time when students have been socially distanced.

“Refugee work doesn’t stop during a pandemic. We’ve just had to navigate the challenges of continuing to provide services in a virtual way. It highlights how our impact is really important, but it’s also really limited, and most families who are resettling in this country don’t even have access to a group like ours that works really hard to provide comprehensive services,” says Phillips-Jackson. “It highlights how broken our system is and that most families are largely on their own. We’re a supplemental service, but there’s so many families that we can’t help.”

How You Can Help