Saeed Malami ‘20 has written his name in the Lafayette history books, becoming the first Pard to be named top competitor at a national championship competition held by the National Forensic Association.

Malami was honored as Performer of Highest Distinction after earning the top ranking in the poetry performance and rhetorical criticism events as well as turning in standout Performance of Distinction entries in after-dinner speaking and prose. 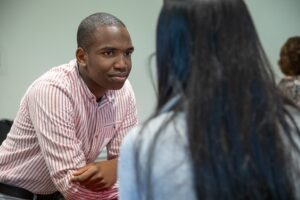 Competitors from 21 schools competed in a dozen events. Students could enter up to four events. While the field for the virtual tournament was smaller than it would have been in a standard year, most of those who opted to participate were significant players, says Scott Placke, Lafayette’s director of forensics and mock trial. In other words, the field was smaller but stacked.

“It is honestly thrilling,” Malami says. “Scott called me the moment he received the email, and he forwarded it to me. I cried on the phone. It’s probably the hardest thing I have ever worked at in my life. To put it in perspective, in my three years of attending the tournament, I had never gotten past quarterfinals. And here, suddenly, it’s us winning the national championship in whatever shape it took this year. Scott is a legend. He made this happen.”

“Saeed is one of the most charismatic people I have ever met,” says Placke. “His natural charm instantly engages an audience. People who are watching him cannot help but pay attention.

“Saeed has a natural intellectual curiosity. Upon meeting him, I learned immediately that he likes asking penetrative questions. He wants to hear other viewpoints and test his own opinions. This trait is a huge component of why Saeed has been so successful. Because of the dialog, Saeed’s performances are extraordinarily thoughtful. And I could go on.”

Teammate Chris Mayer ’20 earned Performance of Distinction honors in the extemporaneous, impromptu, and Lincoln Douglas debate events, with an overall Performer of Distinction award for the competition.

Malami, who graduated with majors in computer science and government & law, is uncertain about his future because COVID-19 altered his graduate school plans.

“Whatever it is I plan to do next, however, will definitely be influenced by the communication and critical thinking skills that I gained in the pressure cooker of my forensics career,” he says.