Adam Atkinson, photography and video manager, has taken thousands of images of Lafayette campus community throughout 2020. Here, he shares his favorites—and the stories behind them

First Day of the Spring Semester 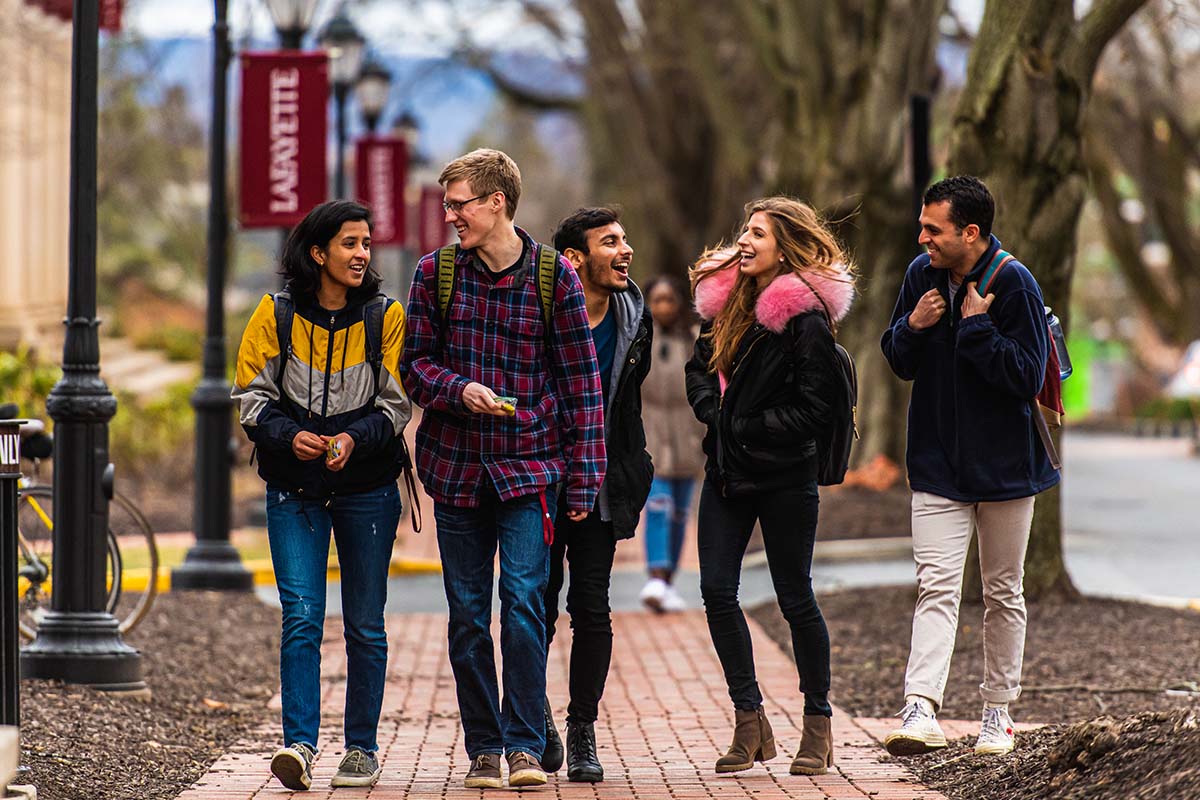 I started working at Lafayette in January 2020. This photo wasn’t taken on my first day at work, but in a lot of ways this image signaled, for me, that I was here. This moment was gently staged, and sometimes when you stage a photo you lose the natural emotion. However, these students had just returned from winter break and were genuinely excited. 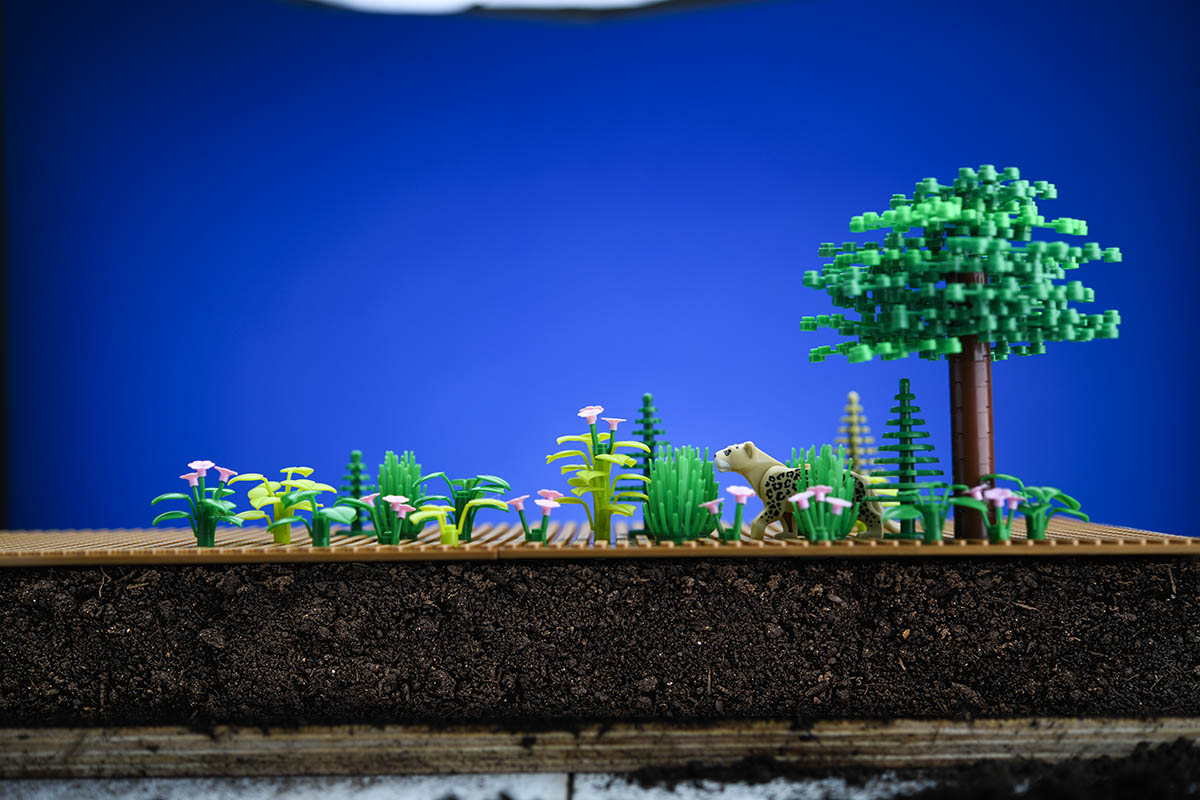 The second I read this article (which appeared in the spring 2020 edition of the Lafayette alumni magazine), I was excited. It wasn’t initially going to be the cover story, but sometimes artwork can drive the conversation in a different direction. I wanted to envision a world where plastics could work in harmony with ecology and environment. So I built a Lego stage and filled it with dirt. Not one single bit of this image is a composite. 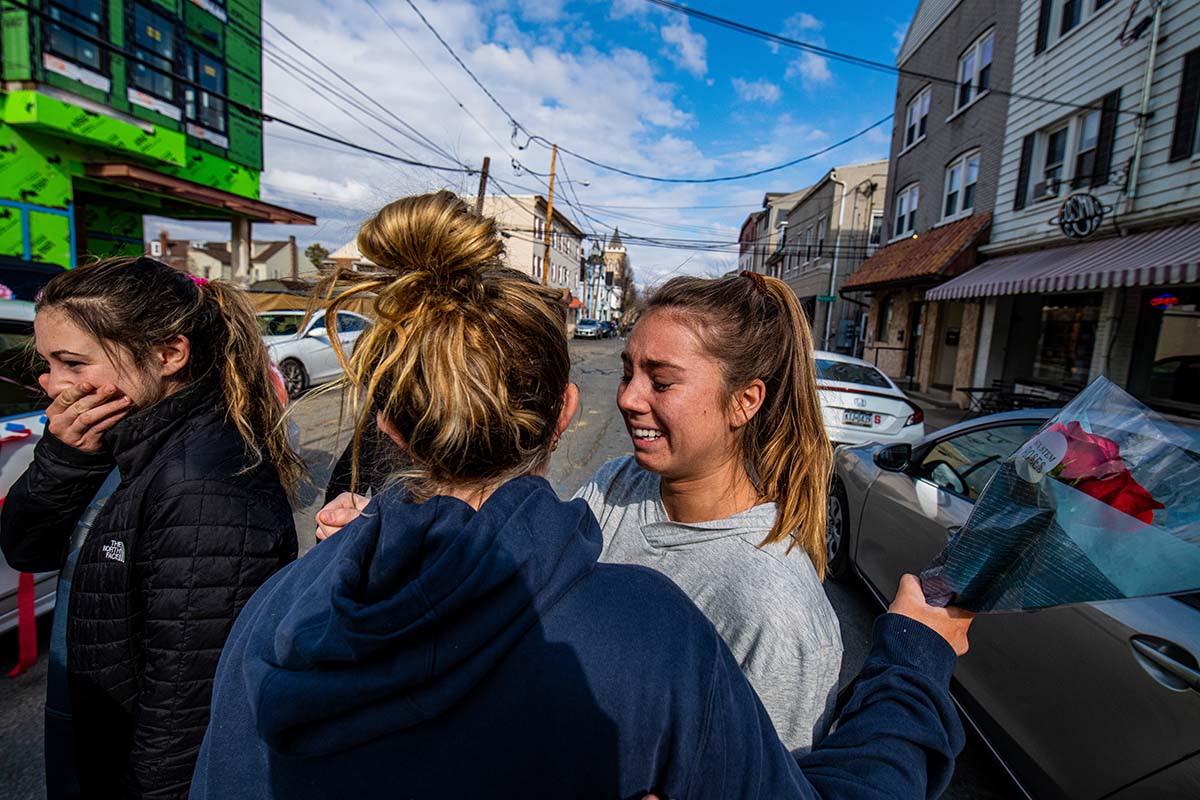 As we moved into March, the reality of Covid-19 wasn’t something any of us would escape. By mid-March we all had gotten word that the rest of the spring semester would be virtual.

The Women’s Tennis Team came together quickly to make sure that their senior teammates wouldn’t miss out on their senior-year traditions. 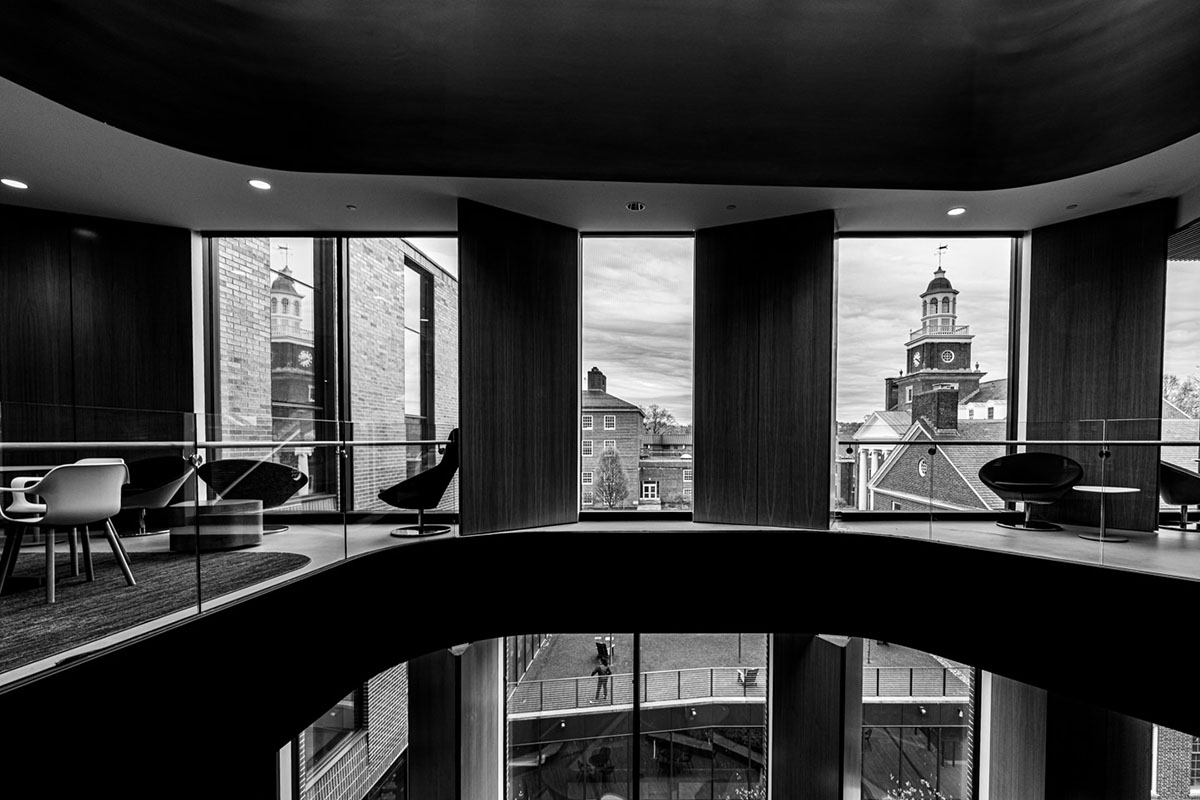 As we turned the corner into April, it was more and more apparent that COVID-19 wasn’t going away quickly. I was already bored of photographing scenic landscapes of campus. A request that required me to be inside Rockwell came through. I decided to take advantage of the access and create a series of images that showed the stark loneliness of being inside this very unoccupied space. I love the entirety of the Quiet Spaces series, however, this one has a person hidden in it, and I think that makes it a little less quiet. 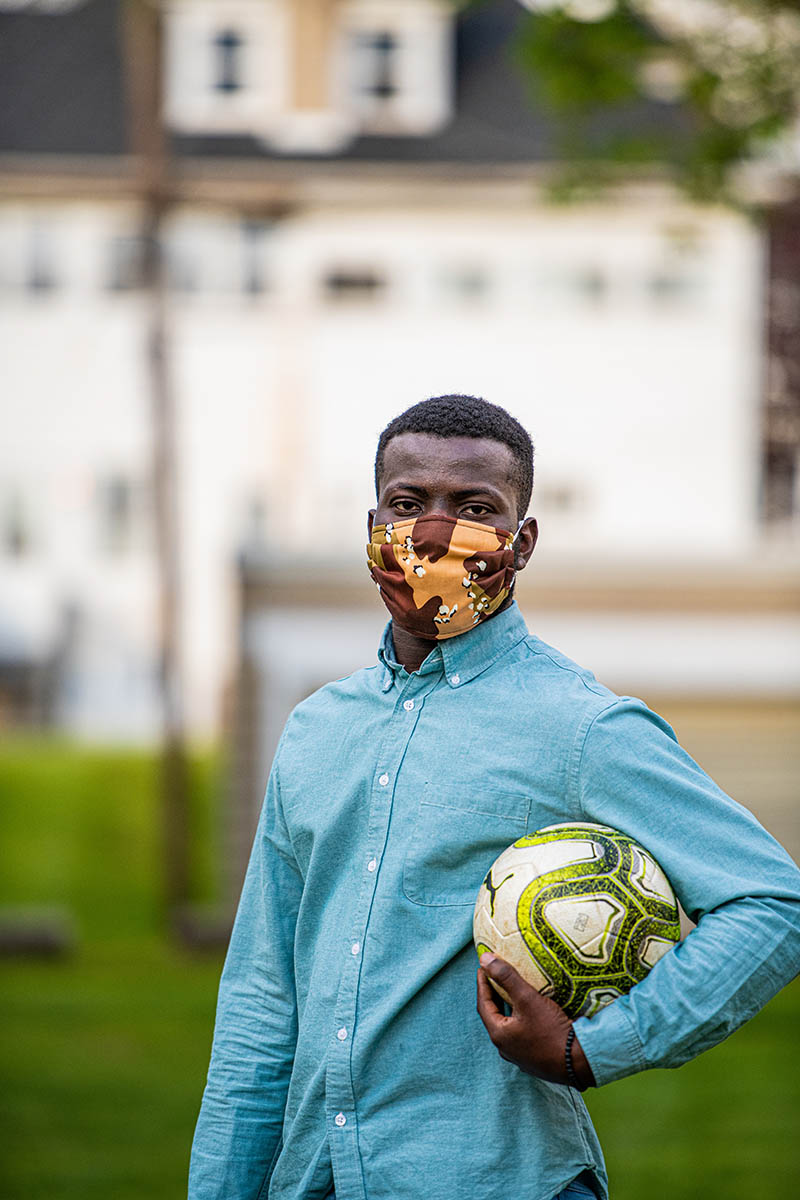 Basit Balogun ’21 was profiled in our summer issue of Lafayette magazine. This was the first portrait assignment I had received in two months, and I was so excited for it. One of the benefits of being a photographer in higher-ed is that you are always working with students who are doing amazing things. Basit is no exception.

Behind the Scenes with Dr. Jeff Goldstein 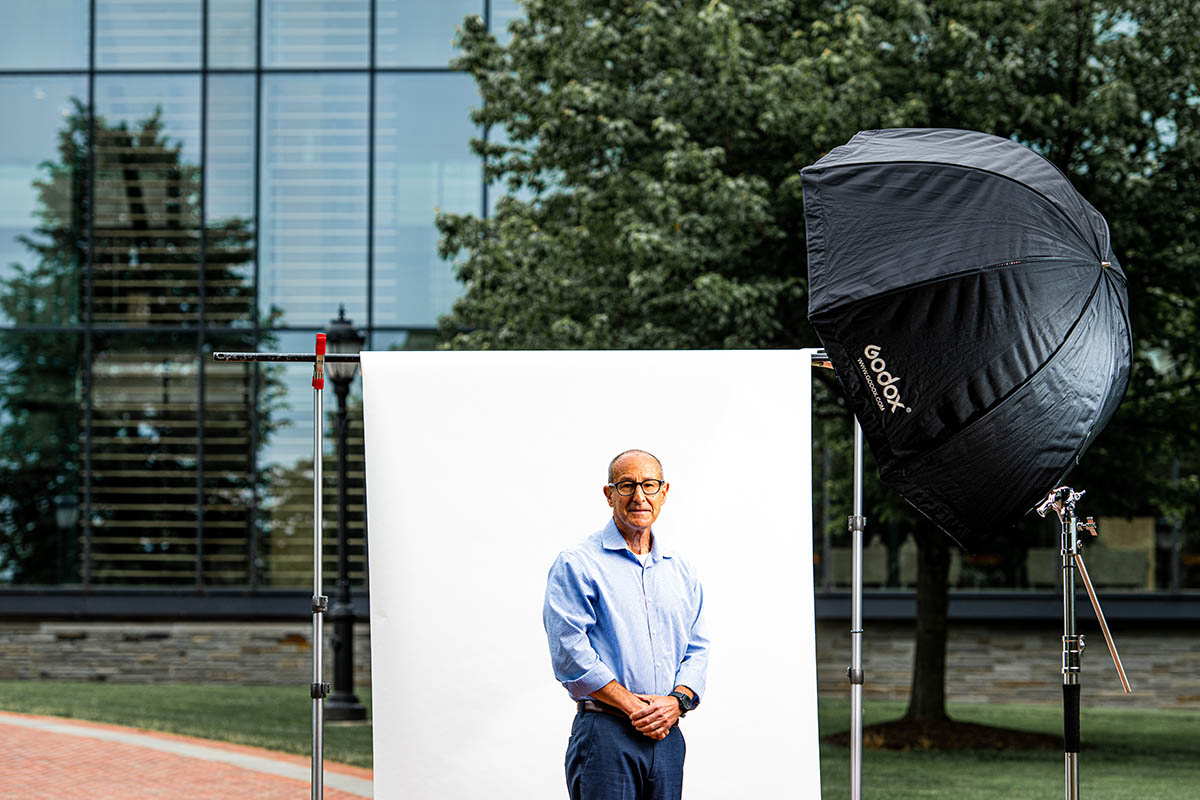 We also profiled Dr. Jeff Goldstein, director of health services, in the summer magazine. The initial request was for a portrait of the physician on a white backdrop. Something we wouldn’t have thought twice about in 2019. I knew it was possible to shoot the image—while also being socially distant and safe. However, readers of the magazine wouldn’t know if we had taken the precautions or not. So I drew this concept on paper—giving a behind-the-scenes perspective to indicate distance—and it was eventually the direction we took. 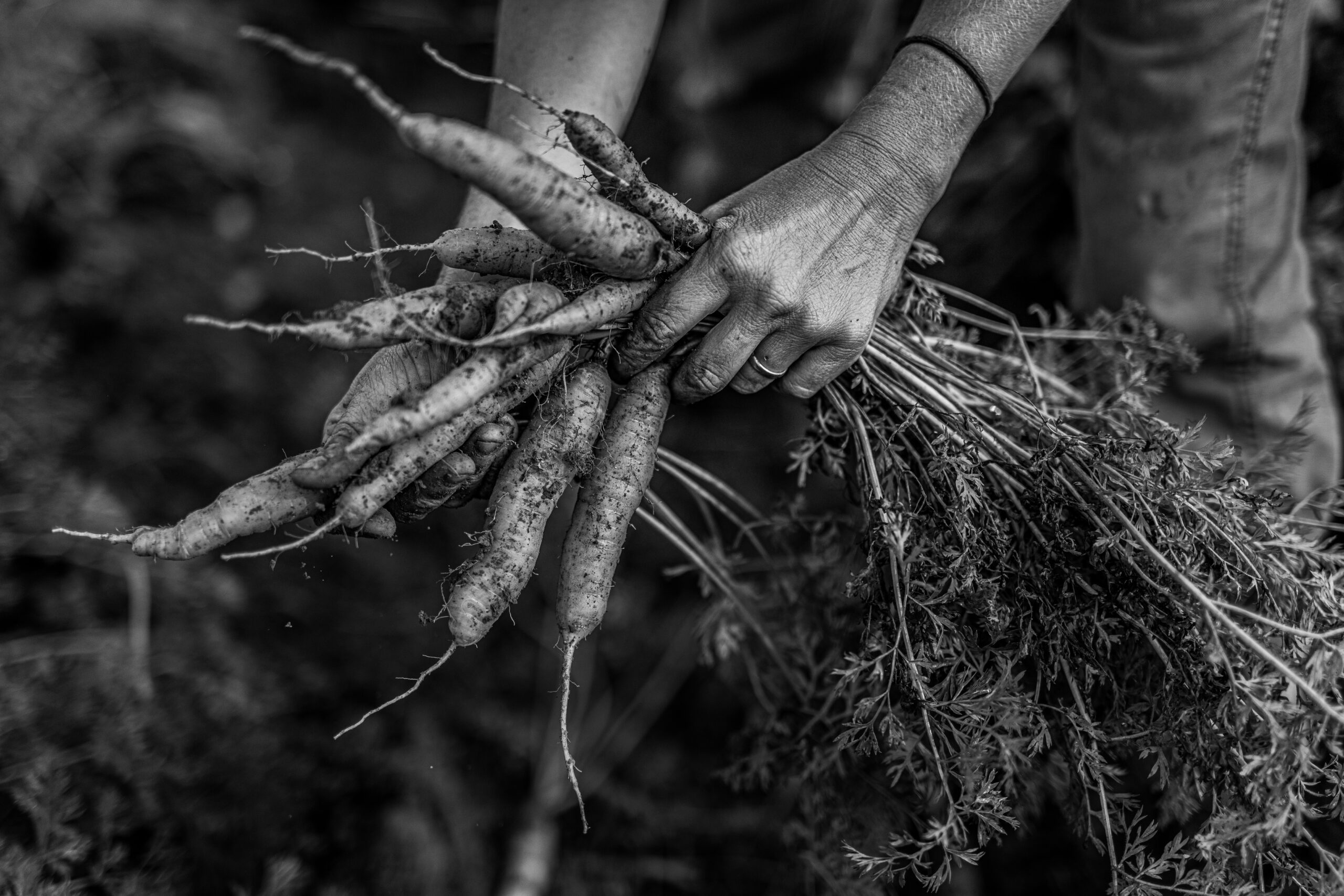 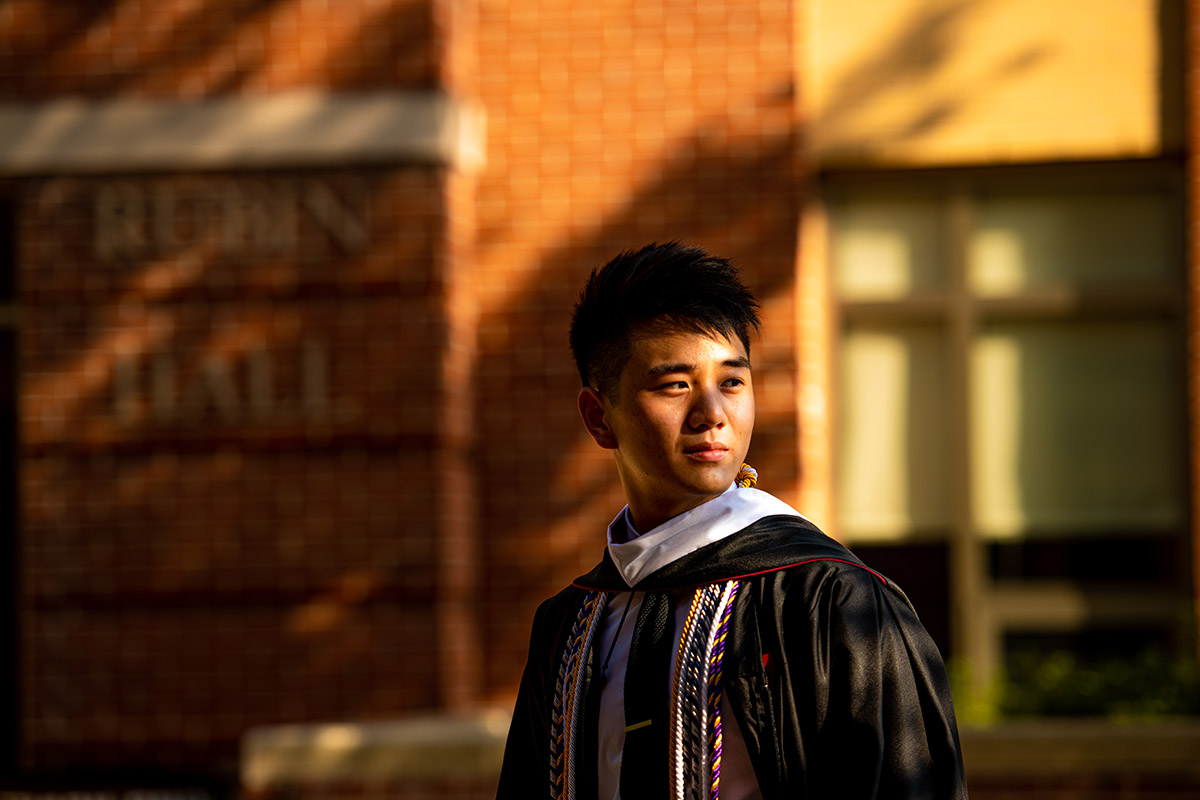 August had a lot going on. We produced a virtual commencement and welcomed a handful of students back to campus for the fall semester. Randy Zhou ’20 was a student that had been available for a bunch of projects that we produced, and due to our remote-circumstances I had never actually met him in person. I ran into him after a long day of shooting a very scaled back move-in day. He had traveled back to campus with his cap and gown so he could take photos dressed up on campus. I was happy to lend a hand.

It’s easy to see why people love this gentleman so much. This was my third time photographing Rob Young, ’14, director of intercultural development, and if I was asked to do it again tomorrow, it would be just fine. Since we had already taken headshots of Rob earlier in the year, I thought it would be cool to try a more environmental approach. While the shot that was selected to run in the fall Lafayette magazine is perfect for the layout, I preferred this image. 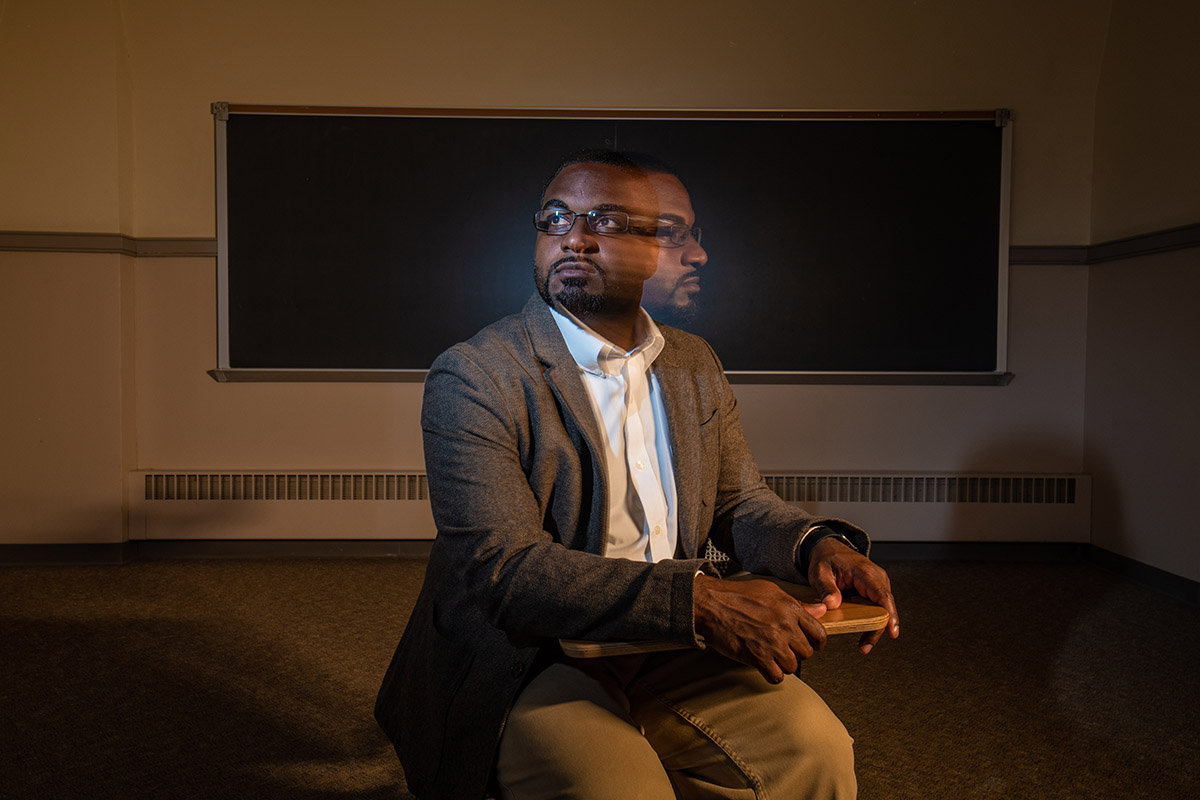 Hey, listen, you don’t get to win every battle. Sometimes the cool idea you have will get turned down for any number of reasons. In this case, we were featuring Assistant Professor of Sociology Carlos Tavares in the fall Lafayette magazine and running a couple of other experimental images near to this one, and we needed something safer to complement them. I loved this image in particular, because of the way it makes Carlos look like a superhero.

Bringing a Concept to Life 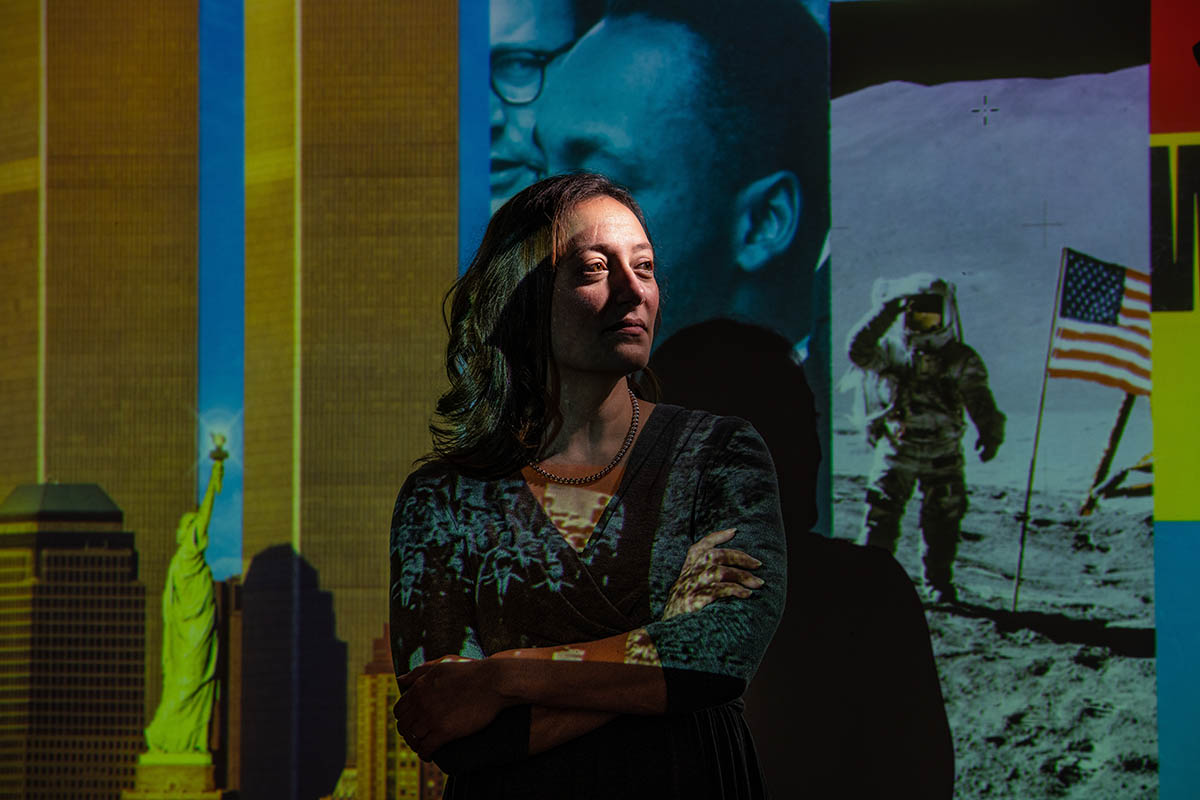 One of my favorite parts of the creative process is conceptualizing: having an idea and describing that idea to a team. You often come somewhere close to what you were thinking or you discover a different direction in the execution. When you show up and absolutely nail it, that’s the experience I live for. This wasn’t the exact image of Jennifer Talarico, professor of psychology, that ran in the fall Lafayette magazine, but it’s my favorite. 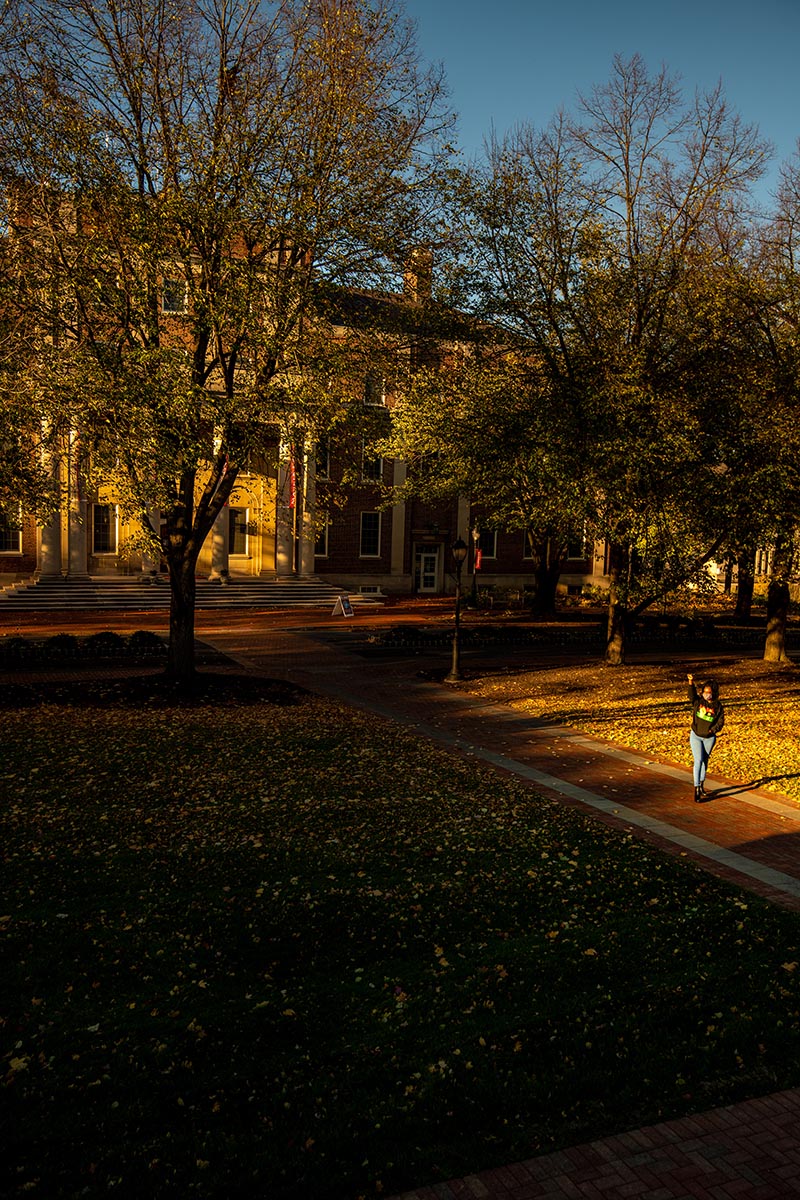 This was an alternate image for the cover of the fall Lafayette magazine, featuring Savanna Touré ’21. Savanna’s activist work is something I really admire. This image was inspired by the historical photo of Olympic gold medalist Tommie Smith and Olympic bronze medalist John Carlos in the 1968 Olympics in Mexico. 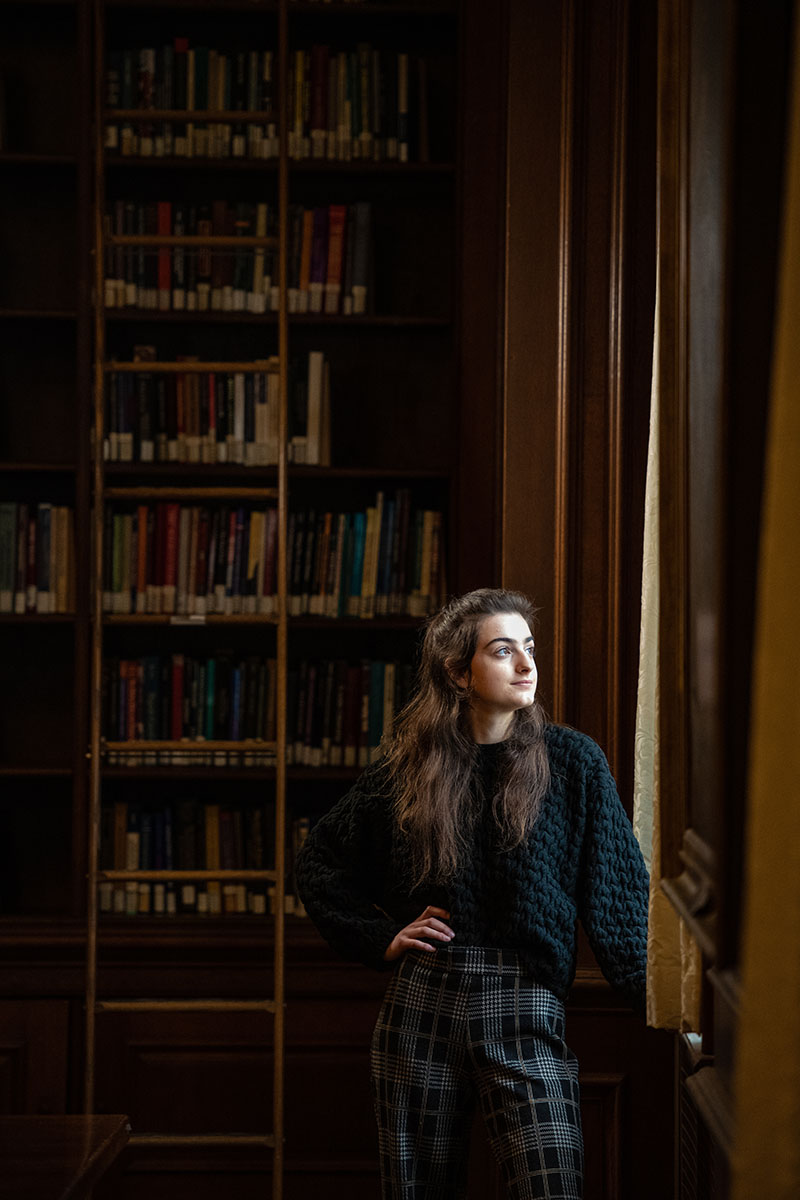 I mean. I got to meet a Rhodes Scholar. Hello!? I photographed Victoria Puglia ’21 in the Kirby Library.