Participants conduct rigorous research to examine topics with a global perspective and then transform their findings into visually engaging, online presentations

Every summer a number of students bravely venture into a six-week intensive program where they deeply dive into research in order to produce amazing online projects on a variety of topics. This year the Digital Humanities Summer Scholars investigated questions with a global perspective, navigating history and issues from Turkey to the Caribbean, Australia to Cambodia, India to Ecuador.

The subject matter was weighty as well, like racial representation in literature, tools of colonial propaganda, perceptions of a war, a refugee crisis, intersections of art and activism in queer culture, and the loss of Indigenous language.

With all digital humanities projects, students aren’t just cranking out a strong research paper; they also are translating that paper into a website, interactive map, and/or digital timeline by using tools of trade in computer science.

“The scholars truly take us on a world tour,” says Angela Perkins, research and instruction librarian and director of the Digital Humanities Scholarship program.

“The students are concentrating on two things. First is rigorous and ethical research around their critical questions. Next are the ways they can make their digital projects visually engaging,” she says.

With just six weeks to accomplish it all, the guidance and skill building of the first few weeks transition into keeping students calm, focused, and good time managers.

Here’s a glimpse into some of their projects and links to all their sites.

Shirel Salinas ’24
International affairs and economics
Project: Investigating Indigenous Language Revitalization in Ecuador (see it here)
The slang used in Ecuador is often words in or derived from Quechua, the most dominant native language among the 14 spoken in the country. But Quechua isn’t held in high regard, and most people don’t speak it, including Salinas who felt out of place in her homeland when she visited a market and was unable to converse in Quechua with a vendor. “It made me want to better understand my culture and how the language is being lost by young people who want to study English since they see it as something that will advance them further,” she says. She discovered her research was most fruitful when searching in Spanish and scouring the works cited on reliable scholarly sources. Her site was influenced by an e-marketing boot camp she participated in this summer through Gateway Career Center. “If I have seven seconds to capture someone’s attention, I want to make sure my site is colorful and offers engaging videos and photos on the interactive timeline.” Through the program she gained more respect for people who create websites, and enjoyed how her peer’s topics became more narrow through research and provided insight into many cultural moments. 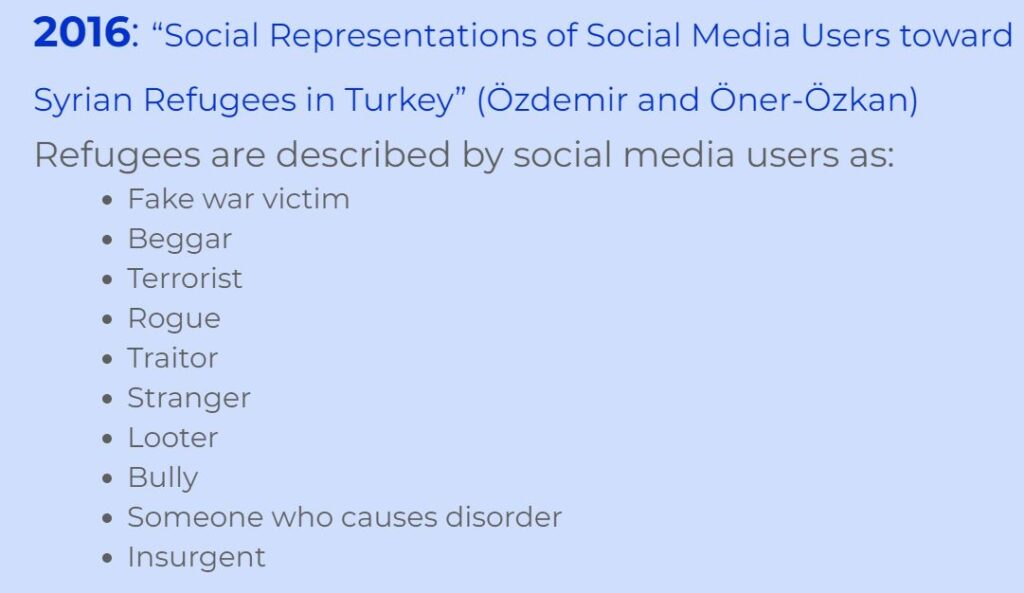 Yazici knows that the most informed public policy is created through the best understanding of public opinion. Such policies respect facts better and make findings clear. This inspired his research and site as he sought to understand the public perception of the refugee crisis in Turkey. Currently 3.7 million Syrians who fled a brutal civil war reside in Turkey. The rhetoric describing them is harsh, ranging from thieves to murderers to terrorists. To gather public opinion, Yazici was granted permission to access Twitter and data mining posts and comments over a 15-day window. Why Twitter? It has a clearer sense of politics and reactions to news than seen in newspapers. His analysis of public opinion shows that most people lack factual knowledge but make up for it in vitriol. He was very careful in representing his findings on his site. “I wanted to be very careful with wording to ensure my results aren’t misread or misinterpreted,” he says. He didn’t have a background in design but leveraged his experience as an editor to make his site clear. “Digital humanities is not often seen in Turkey, so I am excited to bring this approach to knowledge here,” he says.

As an international student at Lafayette, Chandrasena was interested in studying immigrant enclaves in the Lehigh Valley, but research hurdles had him shift his location across the globe for a topic much closer to home. As an Australian citizen of Sri Lankan descent, Chandrasena sought to better understand what happened to the first 500 Sri Lankans to ever immigrate to  Australia in 1882. The country then had a closed door policy but lacked agricultural laborers. An earlier practice of kidnapping and coercion of South Sea Islanders had failed to solve the problem, so the country tried a new approach: contract labor. While Chandrasena illuminated details in that often passed-over history, he spent the bulk of his time finding out about the Sri Lankans who made their journey by using ancestry.com, newspaper archives, and other databases. He has mapped out the lives of 24 people who traveled in that boat so many years ago. “It has been amazing to connect with descendents of these immigrants and create ties back to this moment in time and help others learn about our history,” he says.

Ha-Trang Tran ’25
Mathematics and economics and psychology
Project: A Glimpse at the Second Indochina War (the Vietnam War) Through Vietnamese vs. American Public Documents

Student researcher hopes to understand what makes a society open, civil, and accepting

Studying the eating behaviors of birds