It’s a typical weekend after a week of Zoom fatigue. Maybe you wind up and down the grocery store aisles, grab a cart on the sidewalk before going on your weekly Target run, watch an award-winning film, and … contribute, without really knowing it, to a world rife with ableism.

Zoom only recently added captioning as a standard feature, which is necessary for the hearing impaired. Imagine reaching the top shelf in a grocery store from a wheelchair or navigating a sidewalk outside a department store if visually impaired.

As for movies, it seems award shows love giving hardware to able-bodied actors who take on the demands of a disabled role. Consider Oscar winners Eddie Redmayne for his portrayal of Stephen Hawking in The Theory of Everything, Colin Firth as a stuttering king in The King’s Speech, Daniel Day-Lewis as a poet with cerebral palsy in My Left Foot, Dustin Hoffman who is on the autistic spectrum in Rain Man, Tom Hanks as Forrest Gump, Al Pacino as a blind Marine in Scent of a Woman, and Jamie Foxx as Ray Charles.

Students from the Landis Center for Community Engagement worked to raise awareness of ableism during the inaugural Disabilities Awareness Week.

“With one in four Americans living with a disability, awareness is crucial to creating lasting change between people and for institutions such as ours,” says Allie Bindler ’21.

Organizers Bindler, Beth Anne Castellano ’22, and Alison Maxwell ’22, with support from Melissa Ash, assistant director of student engagement and civic leadership at the Landis Center, drew students, administrators, and faculty members to three events: a panel on ableism; an open forum with the College’s Diversity, Equity, and Inclusion (DEI) Council; and a screening of the film Crip Camp. 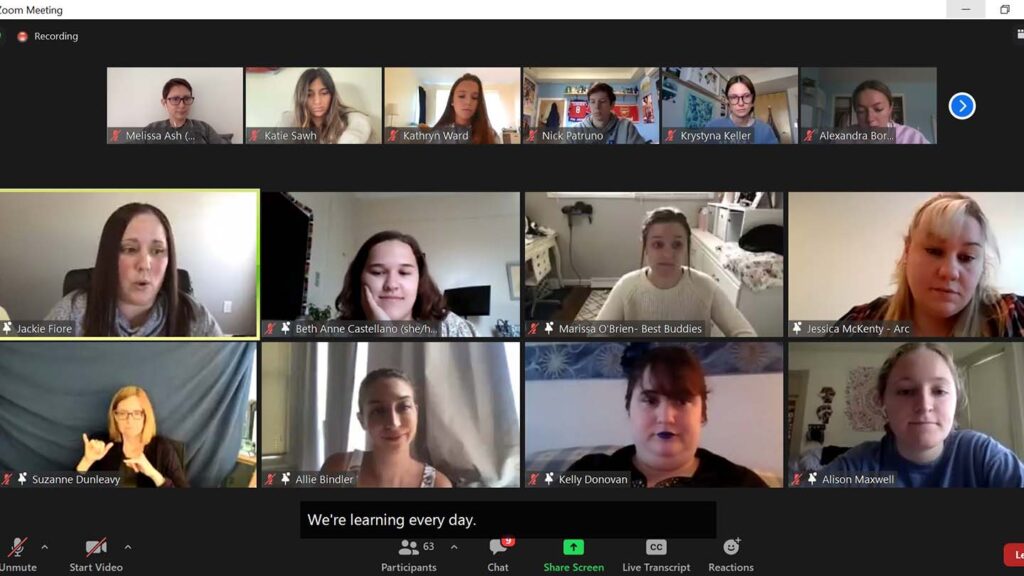 Panelists discussed the importance of education and representation, emphasizing the idea of “nothing about us without us.”

“The panelists created a dynamic conversation to help students understand and break barriers when addressing ableism,” says Bindler. “Their support in helping our community be more inclusive and welcoming is amazing to experience.”

“The discussion painted a really vivid picture of how ableism is ingrained in our society and emphasized to students that the first steps in allyship are simply listening to the experiences of those with disabilities and being willing to ask questions,” adds Castellano.

The DEI discussion had members of the College community openly discuss accessibility, how to best self-advocate, and what steps the College is taking to accommodate each community member’s needs.

Marty Sullivan, assistant director of the Hub and accessibility services, shared how meeting each individual’s needs is a combination of proactive and reactive steps.

Rachel Moeller ’88 P’21, executive director of alumni relations, and John Rybnik ’23 courageously discussed the disabilities they live with and how they made their needs known.

“We had a great turnout of both students and staff, and I think that we had some really great questions asked about how the Lafayette community can do better in supporting those with disabilities,” says Maxwell. “I think this discussion helped people understand some of the issues at Lafayette, and hopefully we will see real change come out of this meeting.”

“One topic of discussion that stuck out to me was the simple idea that designing buildings, services, etc., to be as universally accessible as possible does not disadvantage those without particular disabilities and ultimately benefits the entire campus community,” says Castellano. “Accommodations don’t need to isolate and seclude students, as they often do, sparking a conversation about steps that can be taken across campus to more universally address common accommodations.”

Camp Jened and how it played a central role in launching the disability rights movement, altering the misconceptions of differently abled people, and the passing of the Americans with Disabilities Act.

“The film was really powerful, and I think that a lot of people were surprised to learn about how recent the disabilities awareness movement was in terms of seeing real change from the government,” says Maxwell. “Students stayed after the film to discuss how impactful the film was to them, and we discussed more ways that we can make the Lafayette College community more inclusive.” 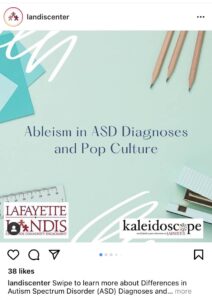 How the Lafayette Community is Helping Easton

Learn About the Landis Center for Community Engagement