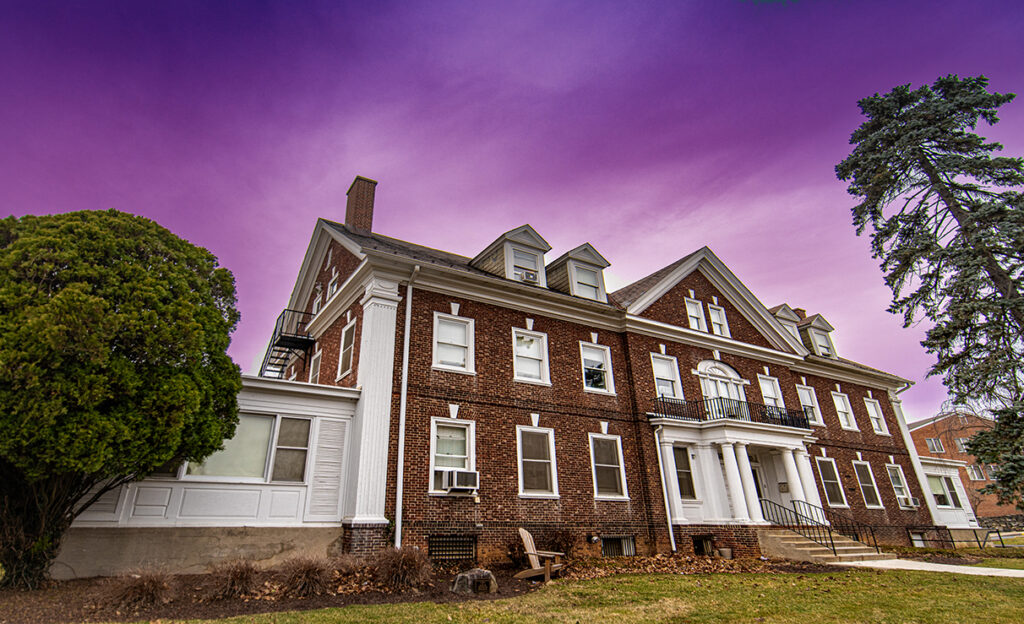 The former Tri-Delta House will now be known as Lavender Lane, a fully gender-inclusive space.

Each academic year, as students peruse the vast array of housing options available for living on and off campus, they’ll find there are many different ways to craft their desired residential experience.

Starting next semester, those options will include the College’s first-ever fully gender-neutral, gender-inclusive residence hall. Dubbed “Lavender Lane,” the former Tri Delta sorority house will provide a welcoming living space for 25 LGBTQIA+ sophomore, junior, and senior students and allies. And if its organizers have anything to say about it, it will be one in a series of moves the College makes in the future to create an even stronger LGBTQIA+ affirming environment.

“We’ve had an overwhelming response from the student body in regard to applications to Lavender Lane. We have currently received 34 applications, and there are only 25 beds to fill. This tells us that there is a larger gender-nonconforming population on campus than we originally thought, as well as people who feel unsafe in their current living situation. We will continue to push for gender inclusiveness across campus,” shared Meredith McGee ’23, who has organized all planning for the house along with Kayla Massi ’23.

Massi and McGee currently serve as president and vice president, respectively, of OUT Lafayette and realized that it would be to the benefit of many if the College’s housing options—which allow students to indicate a preference for assignment to a gender-inclusive unit in Fisher East and Fisher West, Grossman House, Watson Hall, Watson Courts, and any off-campus apartment—continued to reach beyond outdated paradigms and create fully immersive environments that also encourage educational programming.

Standards across campus have certainly improved, and along with the aforementioned gender-inclusive locations, several other residence halls contain single-use restroom facilities that are not designated by gender. McGee and Massi, however, had a goal of fully accommodating the vast array of identities that exist on campus and in the world at large.

To that end, they will be hosting a mandatory informational meeting Feb. 28 for the individuals who applied for the house, so that they may go over the rules and expectations for living in the space. Anyone who did not apply but who may have an interest in the house is also welcome to attend, though it is unlikely that McGee and Massi will be able to accept any more applications for the coming semester.

“Lavender Lane is considered special-interest housing, so we will have to keep reapplying for the space each year. Hopefully, in the future, there will be options for permanent gender-neutral living spaces,” says McGee.

Though planning for Lavender Lane has happened in collaboration with Grace Reynolds, director of residence life, and Tommy Lee, assistant director of intercultural development for gender and sexuality programs, McGee and Massi have handled a number of responsibilities associated with the house getting up and running, including addressing their peers’ questions and concerns.

“Kay and Meredith have been talking about this house since we first met, and I could tell by their enthusiasm and drive that this would be a very real possibility. I have been so amazed at their organization and purposefulness in creating an inclusive and affirming place for students to live and build community,” says Lee. “Comparatively, my role has been quite small. I provided some guidance on the application, but it really didn’t need any editing or revisions. They were able to so poignantly articulate the importance of gender-affirming housing and outline a clear strategy for filling and utilizing the space, and it was my honor to back them up and advocate for their application internally.”

Lee went on to acknowledge the project’s immediate and long-term impact.

“I’ve mentioned how I want to see more spots on campus become safe spaces for LGBTQIA+ students beyond just the Gender and Sexuality Resource Center (GSRC). Lavender Lane is a physical embodiment of that goal coming to life. Twenty-five students will have the privilege of living in the space, but so many more will benefit from the programming and meeting opportunities presented,” he says.

“Its existence as a social community space for programming and conversation also allows the GSRC to focus more directly and intentionally around being a dedicated educational and resource-oriented space. Long term, it is important to make Lavender Lane sustainable and to provide gender-affirming housing opportunities year after year. The Office of Residence Life have been phenomenal collaborators, and we are thrilled to be working alongside them to identify ways to provide inclusive housing and implement best practices institutionally.”