In June, Skip Wilkins, associate professor of music, was in the Czech Republic to film a television feature on foreigners with deep connections to the country. Of course, while in Europe, he planned to play a few gigs and lined up musicians for shows in Prague and Berlin, Germany.

He wasn’t fishing for any new stuff to play. Why would he, when the jazz catalog is replete with 100 years of masterpieces? Plus, he is known for writing his own fair share of superlative pieces.

He also was sitting on material from three albums that were in various stages of development, two stateside and one in the Czech Republic, that all were met with delays, both in release date and recording schedules, due to the pandemic.

Still, he was taken with a new tune he’d heard and wanted to share it with the world.

That tune was written by Vanessa “Vanni” Haraya Dela Paz Maca ’22. Never in Wilkins’ 22-year Lafayette career has he premiered a student composition on a professional bandstand, much less in world capital cities, as the headline act.

But this is no ordinary piece. 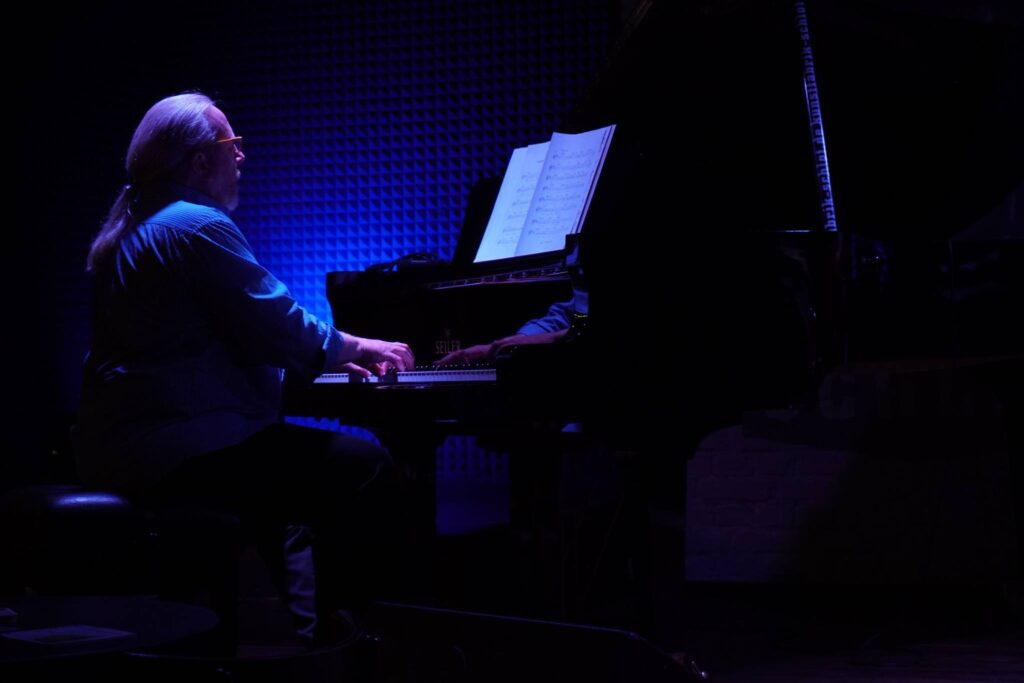 Skips Wilkins at the piano at the Schlot in Berlin, where Macca’s composition premiered on June 4, 2022

Maca still participated in the arts as a member of the concert choir and chamber singers. They also took private piano lessons with Sean Gough ’09, applied instructor of piano.

Maca used some of that time to begin composing songs and turned back to Wilkins for formal mentorship.

“I have not had many mentor figures in my life,” Maca says. “But Skip is one. He’s always interested in what I’m doing and always manages to show me the things I’ve been looking for. His work is so valuable.”

It’s what made them delay in bringing a piece to Wilkins, but finally with a few weeks until graduation, Maca brought the start of a composition. 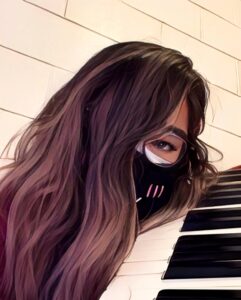 “It was just 16 bars, but it was so bright, melodic, and rhythmic,” Wilkins says. “I asked Vanni to write a bridge.”

“I wanted to take the bridge somewhere else, a darker place that could resolve back to the bright start,” Maca says.

“The bridge Vanni brought in was wonderful and gave the piece an extra special charm,”  Wilkins says.

“I could hardly believe his reaction,” Maca says. “I was just doing this for fun. I’m an amateur, but hearing Skip play it allowed me to see the skill and remark on the unconscious stuff that happens in my mind.”

The piece is titled “This Starry Night with You.” The emotional inspiration for it came from the friends Maca met at Lafayette whom they hold dear for the special moments shared over four years.

“In my Filipino culture, there is an air of gratitude, which is expressed in the phrase ‘utang na loob,’” Maca says. “It is a kind of psychic debt in which you remember what someone has done for you and everything resulting from that act, including the person who you are now. I try to live my life every day to honor what everyone has done for me even if the depth of what was received is unknown.”

Those debts are ones Maca seems to be paying off in innumerable ways, having recently presented on critical and liberation pedagogy at the American Association of Physics Teachers and the Physics Education Research annual conferences.

“Many teachers and students of physics see it as a rote task, full of random facts and equations to memorize,” Maca says. “But it’s not all set, and there are many ways to have fun and engage creatively with physics.”

This, it seems, is the place where philosophy, music, and physics merge.

“When something is well written, good players manage new songs well,” Wilkins says. “Because jazz is a skill set in action.”

Sounds perfect for a world premiere.