Prof. Eric Hupe and student collaborators' virtual reality models will set the pinnacle for how art history is studied at Lafayette

While living in Rome, Michelangelo wrote to his nephew requesting he send him food and wine, specifically trebbiano wine, a white varietal that he was especially fond of.

Devotees of the original Renaissance man could today uncork a bottle while venturing through Italy and taking in all he and his contemporaries created during a major period of art, music, literature, and architecture.

Together, they had exclusive access to two sites of Michelangelo’s Mannerist architecture in order to create virtual reality (VR) models that will set the pinnacle for how art history is studied at Lafayette. (Explore a few of Hupe’s VR models.)

It all began in a traditional sense as Brown’s passion for art history ignited during an introductory level course with Robert Mattison, Marshall R. Metzgar Professor of Art. Her interest in art and government was piqued as Mattison described Michelangelo’s complicated relationship with the Medici family.

By her sophomore year, she had written papers on two Michelangelo sites designed for the Medici: the New Sacristy and the Laurentian Library, both parts of the San Lorenzo church in Florence. 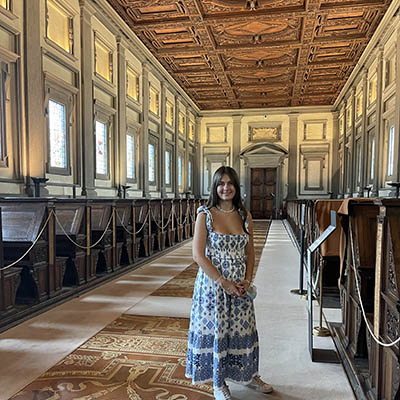 During her junior year, Brown earned one of four Rothkopf scholarships and was ready to visit Vienna and Prague, until COVID-19 canceled the opportunity.

As she now works on two senior theses, she decided to apply for the Assante-Carrasco Fund for Honors Research Travel.

“The Assante-Carrasco Fund, as part of the Global Learning and Community Engagement Endowment, is a new program designed to provide funding to students for travel related to their senior honors thesis research in areas that explore current developmental, economic, educational, environmental, political, social issues” says Rochelle Keesler, director of the Office of International and Off-Campus Education.  “Seniors who are still working on their honors theses as well as juniors who plan to write senior honors theses who would benefit from travel are welcome to apply.”

Brown’s art thesis is on the Mannerist movement.

“The Mannerist period, a moment that came at the end of the Renaissance, is one that scholars continue to debate,” she says. “That intersection of art and argument appeals to me.”

She worked with Keesler on her Assante-Carrasco Fund grant application and was one of three students selected for the fund so far this academic year (two others will conduct research in Chile and Argentina over the winter break).

As she discussed her thesis and travel plans with Hupe, her thesis adviser, the plans became more interesting. His interest in VR, his scholarship in Italian Renaissance, and his own travel funding for time in Umbria, Italy, dovetailed nicely with her topic.

So Brown applied for additional funding from her Assan te-Carrasco Fundgrant to help cover costs of Hupe joining her.

Together, if the sites were willing, they could capture these locations with digital images and build 3D models. 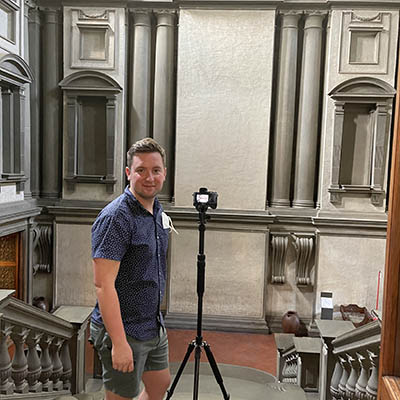 Hupe contacted the sites and was granted private access to both sites—a few hours each day over the course of a week.

“As a professor, I ask students to study works by looking closely, contemplating a piece of art for at least 15 minutes, taking in the details,” he says. “To have this kind of access to these amazing sites invites close looking.”

Luckily for them, the College equipped them with the computer and photographic equipment needed to do their work.

As Hupe and Brown got set to travel, Carr served as home base. As Hupe’s summer EXCEL Scholar, she was crucial to their success. Carr’s job involved downloading images from Italy, cleaning them, processing them, and then rendering rough models so that Hupe and Brown could see what other images and details were needed.

Prior to the trip, the team practiced in another revered site: Kirby Study in Van Wickle Hall. They took images of the study, and using photogrammetry software, stitched those images together to create a VR model of that room. 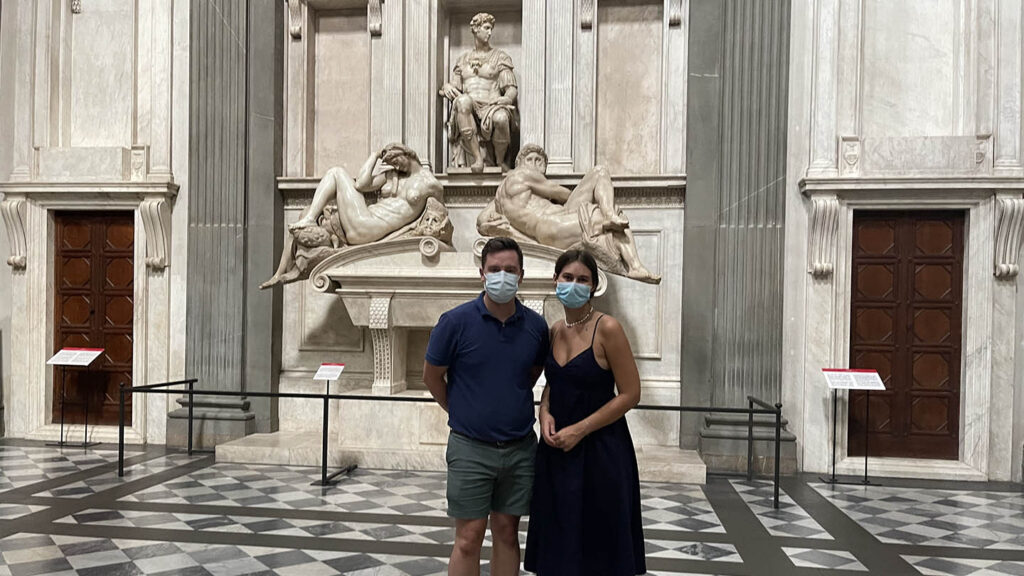 During their first site visit, Hupe and Brown took around 700 images in New Sacristy. The conditions were not easy. They didn’t use artificial light, so they were taking photos with long exposure times to compensate for the low light.

When they reviewed the images from that day, half were blurry.

It prompted them to make major adjustments.

“We developed a dance almost, a system where we used two cameras to take two images at each setup and used a remote shutter with timed pauses between photos,” says Hupe.

Day two they fared much better. They even bought an extension to their tripod to reach the details well above their heads.

But Carr was then facing the hurdles that come with computing: upload times, storage space issues, blips in WiFi, reboots, and crashes.

“I was watching so many tutorial videos on YouTube about RealityCapture processes, all made by a man named Jakub, that I started praying to Jakub that nothing glitchy would happen,” says Carr.

“We are given this opportunity once in a lifetime, so the pressure to capture correctly and produce something amazing is real,” says Hupe.

Pressure enough to earn a bottle of trebbiano wine at the end of the trip.

While they cheered their accomplishments, the work is far from over.

Brown still has to write her theses. The trio is still refining images to render a model that will be shared with the site managers in Italy.

More so, art history students will be excited about this modern approach. 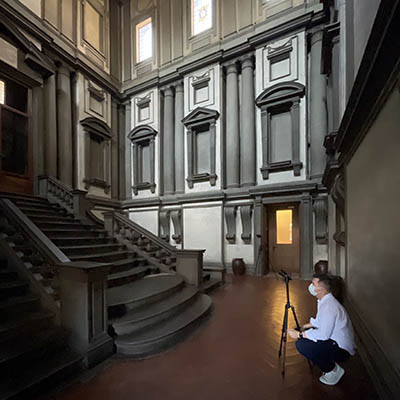 Eric Hupe at base of a staircase designed by Michelangelo

“Looking at slides in a lecture hall or a 2-inch photo in a textbook fails to capture so much,” says Hupe. “But to wear a headset and step into a virtual space, students can travel without leaving their room, avoid crowds, costs, and disease, and appreciate the sense of scale, the details, and the craftsmanship of major works.”

Hupe’s ambitions are clear: to do more of this.

“I want to build this program, having students work on creating VR models of major sites,” he says. “It helps bring art history out into the world, breaking down traditional barriers that can leave it isolated, while also fostering collaboration within a field that is usually fairly individualistic.”

Building such a program will require more students who blend art, technology, culture, and global thinking—something Lafayette graduates excel at. Such academic pursuits also leverage another approach at the institution: blending disciplines so students can bring a range of thinking and skills to the table. But making a program like this happen also requires funding, like Assante, to grow the number of student scholars and global sites.

“Opportunities like this are the reason I came to Lafayette,” says Brown. “This attention from professors, and the opportunity to conduct real research and see travel as meaningful scholarship. This project truly culminates all the work I have done over the last three years.”

No doubt Michelangelo would lift his glass to that.