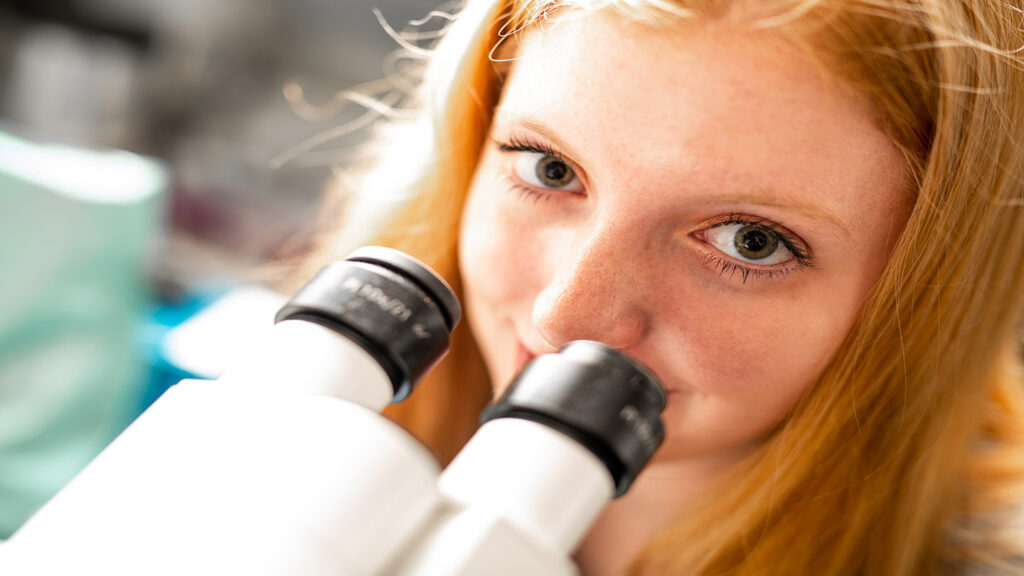 Samantha Ganser ’23 has always wanted to create a more just society—and wants to use science to be able to do that.

As someone who has known her path since she was first exposed to Science Olympiad in middle school, Ganser says she has felt a pull toward biochemistry since she was 13 years old. When she heard Justin Hines, associate professor of chemistry, and one of his program alums speak at XLC Day, the speech she heard inspired her to approach Hines and ask questions.

The rest, as they say, is history.

“I approached him after his talk, and I asked him if we could discuss his research. And then we met later that week, and he convinced me to come to Lafayette. After I committed to coming here, he offered me a position in his lab,” says Ganser, who is drawn to research and describes herself as a very analytical thinker. “I was actually able to start research with him the summer before my freshman year, which was a really cool opportunity. I’ve been working with him for three years now, and that’s really solidified my desire to pursue a Ph.D.”

As a biochemistry major and intended anthropology/sociology minor, Ganser’s thirst for knowledge and researching diseases has led to working with yeast prions—misfolded proteins that aggregate together—which are studied to better understand neurological diseases such as Alzheimer’s, Parkinson’s, and Huntington’s diseases.

More specifically, she’s studying prion elimination mechanism, which is a way to make the misfolded aggregates go away by using the chaperone proteins Hsp104 and Apj1. The goal is to narrow down the specific amino acids of Apj1 necessary for the elimination mechanism, and the study is done with yeast because it’s a good model organism to better understand the process. 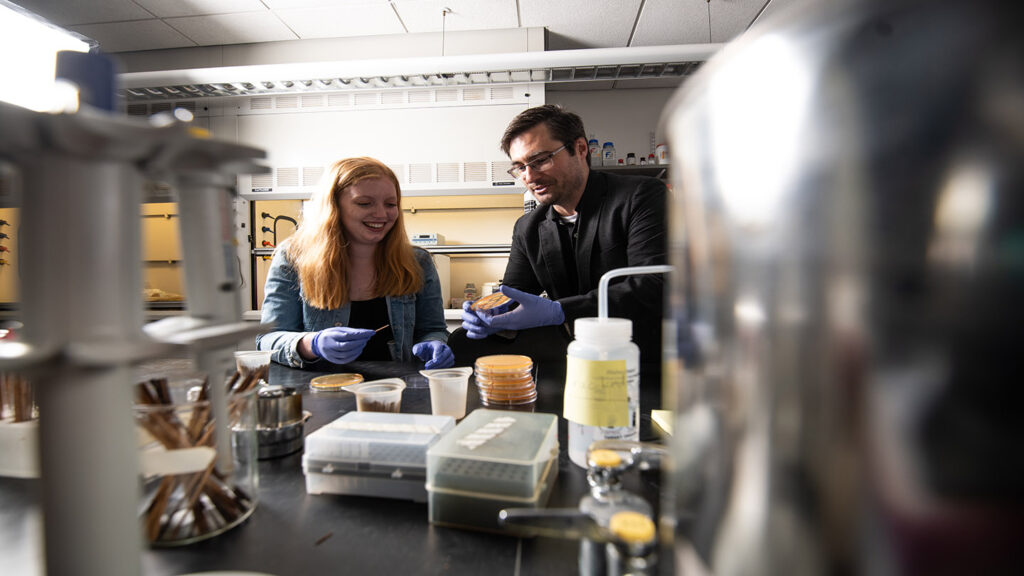 This summer, Ganser will be traveling to the University of Wisconsin, where she’ll create constructs, do some molecular cloning, and build DNA sequences of the proteins that she wants to express in the yeast. When she returns to Prof. Hines’ lab, she’ll test those proteins in the yeast to see if they’re sufficient to support the prion elimination mechanism.

“What we do now in the Hines lab helps understand how proteins work, understand how these systems work, and then other people can develop drugs based on the knowledge that we’re acquiring,” says Ganser, who enjoys that the development of new medicine starts when basic scientists learn of a biological target. “I like the idea that acquiring basic science knowledge can lead to new ways to treat people.”

In March, she was awarded a Goldwater Scholarship, the premier undergraduate award in mathematics, natural sciences, and engineering. Named in honor of longtime Arizona Sen. Barry Goldwater, the scholarship is awarded based on merit, and the actual amount given is based on financial need, up to a maximum of $7,500 per academic year. The extremely competitive selection process allowed just 417 of over 5,000 national applicants to receive a scholarship. Camille Carthy ’23 also was named a Goldwater recipient.

Ganser, who was appropriately in the lab when she got the email with the good news—she says the “whole department” heard her screams of joy—listed in her application that her career goal is to get a Ph.D. in biochemistry and become a professor studying the mechanisms of neglected infectious diseases. Additionally, she will research issues of equity and education.

“I want to advocate for others who are less privileged than I am. I’ve always been really passionate about education, and I tutor refugees in English (Ganser is active in Refugee Action). I’ve always been fascinated by the ways that people learn, and education as a science,” she says. “We can figure out how people learn and find the best ways to teach them. I’m planning on becoming a professor, and I want to be the kind of professor who uses evidence-based education methods.”

Ganser credits her on-campus mentors, including Hines and Mike Butler, associate professor of biology, and Chip Nataro, Marshall R. Metzgar Professor and head of chemistry, with helping guide her through her research and encouraging her Goldwater application. Hines also will be her supervisor for her thesis next academic year, which will be a continuation of her current lab work with the prions.

“Profs. Hines, Butler, and Nataro all wrote letters for me that impacted my Goldwater application, so I’m very thankful for them for taking the time to do that. Prof. Hines took a chance on me when I was just 17 years old and had no idea if I was going to thrive at Lafayette. He’s a brilliant scientist and an all-around great person,” says Ganser. “I worked on a collaborative study with him and Dr. Butler [to assess methods of teaching research and design], and Dr. Butler really mentored me through that project, and I learned a lot from him in that capacity. And Dr. Nataro is always open to talking about equity and inclusion within the department, and he’s taken a lot of steps to improve those things. They’ve all played roles in my development as a scientist, and I couldn’t thank them enough.”

Speaking as someone who has always created a plan for herself and followed it to the letter, Ganser has a bit of helpful advice for future hopeful Goldwater winners—and it starts with being attentive toward your goals during your first year on campus.

“When you’re looking for research, find the research you want to do early. Find it during your first year, and ask your professors right away if there are research opportunities. A lot of professors are looking for young students to do research, and then developing that research for several years can help with a better Goldwater proposal,” she advises. “It’s also important to make connections, and to connect with your professors and mentors and to seek out their expertise. They can help you and will be instrumental in your application process.”

The Goldwater Scholarship is one of many programs administered through the Office of Fellowships by Dean Julia Goldberg.

“Samantha is well on her way to becoming a biochemist of repute,” says Goldberg. “Her interests in biochemistry are multifaceted spanning from conducting cutting edge research with improving the way STEM courses are taught in college to ensuring DEIJ concerns are addressed at all levels of society worldwide.”