Student entrepreneurs team up to move ideas, products, and ventures forward as part of the Bergh Summer Accelerator program

Summer can mean internships, family visits, jobs, and travel. For student entrepreneurs, summer is a time to hussle, moving ideas and ventures forward.

Luckily the Bergh Summer Accelerator (BSA), supported by a gift from Chip Bergh ’79, president and CEO of Levi Strauss & Co., is able to provide the needed funding, resources, and mentorship to help validate, scale, and realize those ideas and projects.

Meet the teams involved in the 2021 BSA.

Lafayette Easton Alliance (LEA) is a new student-led group designed to bridge the “town and gown” worlds at Lafayette. To start, LEA researched other similar efforts in college towns, the historic relationship between the College and Easton business community, and organized a series of one-on-one meetings with nearby small-business owners. The only student-led organization of its kind in the country, LEA asks the question: What might happen if students took the lead?

Background: LEA’s first project targeted COVID-19 threats facing Easton retailers and restaurants. With input from Greater Easton Development Partnership, students researched local retail trends and offerings, and effective small-business practices, culminating in a social media campaign to market to Lafayette stakeholders through a “Buy Easton” effort. They presented their work and findings at the International Town & Gown Association (ITGA) annual conference. Riley Larson ’21, economics, who is passionate about this work, wanted to ensure it didn’t end after his graduation, and Yusuf Dahl, director of the Dyer Center for Innovation and Entrepreneurship, felt like the group could create a value-adding and self-sustaining revenue model.

Impact: Business managers and their organizations want to know, “What do students want?”  Students want to know, “What local products or services might appeal to us?”  LEA is building a bridge to dynamically answer those questions. Most importantly, students are learning about the world of small business, digital marketing, and effective ways to build their Easton “home.”

VIMSIM, a virtual machine simulator, takes virtual learning for students developing manufacturing skills to the next level by adding haptic feedback. Their solution mimics the physical requirements of a machine when a student lacks physical access. 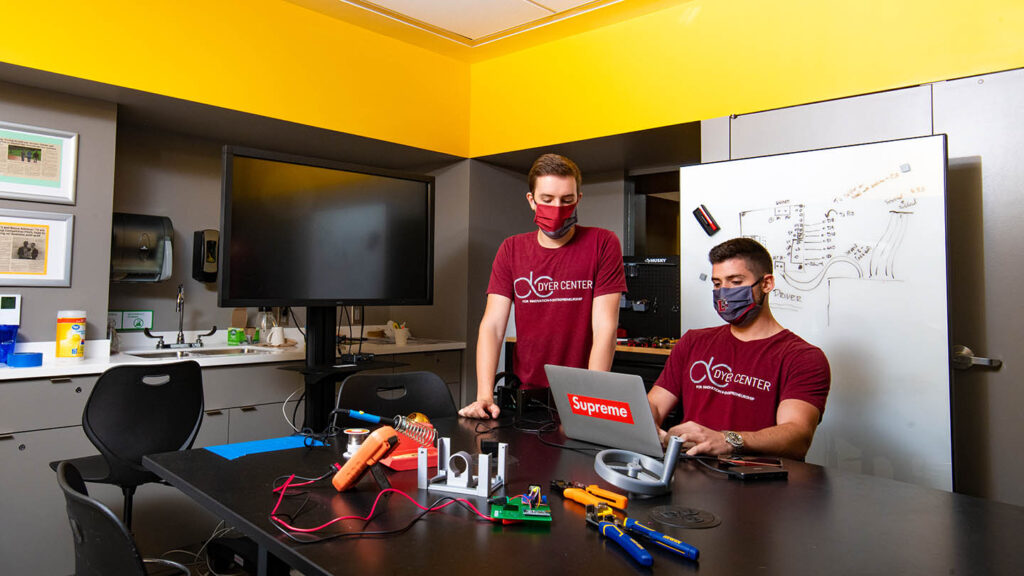 Michael Anzilotti ’21 and Antoine Amblard ’21 work on their project in the Dyer Center’s maker space on campus.

Background: During COVID, remote classes proved a challenge for all. But that challenge was amplified by students attempting to learn how to use manufacturing equipment. This is when mechanical engineering grads Michael Anzilotti ’21, Antoine Amblard ’21, and Brian Kaufmann ’21, and three other classmates saw an opportunity. Their idea served as the project in their senior design course. They then brought that idea to the Big Idea Pitch Competition and tied for second place. That win made them realize their idea could go further.

Summer goal: System improvements and market research were the main goals. They wanted to ensure the product was a safe and solid alternative to operating real machinery. So they tested structural components. They also began to research their primary users and held several meetings with manufacturing institutions and councils. 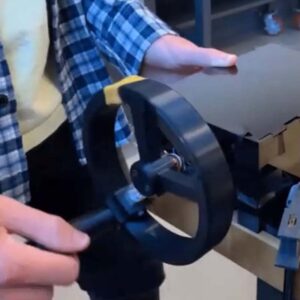 Outcome: They made improvements to structural components and, based on conversations and research, added features that users wanted to see. On National Night Out, they went to a local elementary school and set up a table where many kids and young adults tested the product and provided feedback. They left with two dozen solid responses. More importantly, several kids returned to the table to “learn again” on the equipment. As they work to integrate that feedback, next up are meetings with a local community college and high school technology teachers.

Impact: Kaufmann is set to begin a double master’s degree program at Tufts—one program is in innovation and management. Amblard begins his master’s degree in mechanical engineering at Carnegie Mellon. Both feel VIMSIM will benefit from that new knowledge and experiences. It leaves Anzilotti to work on development, funding, and strategy, but they all feel the knowledge and networks they built this summer have given them the right footing.

As the winner of the 2021 Big Idea Pitch Competition, Songs We Share was then called Tune Dune, an app that links friends’ music streaming accounts, examines playlists, and curates a song queue to keep the mix of music flowing.

Background: Whether at a party, a car ride, or just hanging out, hearing one person’s music can get stale, so mixing together people’s songs can help the vibe feel more communal. Neloy Kundu ’23, computer science, had developed, created, and launched the app prior to the pitch competition. The win propelled him to cancel two summer internships, including one at a startup in California, and focus on target markets and sales strategies for his product.

Summer goal: Determining a clear customer base in order to grow was the primary goal. To get there, Kundu conducted nearly 100 customer interviews, which was a “different ballgame than coding for hours in my room.” Over the course of the interviews, Kundu realized those hours of coding may have been better spent. “Rather than develop cool features that may not be useful, I could have been growing my user base,” he says. While he was thinking early on to target bars and clubs, his thinking shifted there even though it took a bit for him to accept.

Outcome: Kundu renamed the product and altered the approach. He hopes Songs We Share can be a profile feature on a user’s social media platforms, seeing the tunes that their friends love. He developed and launched a new site to accompany these shifts.

Impact: Kundu had frequent meetings with Dahl, whom he describes as the “most useful resource.” Two books on customers and sales, Talking to Humans and Traction, recommended by Dahl helped him advance his thinking over the summer.