He strode across the stage in Kamine Gym, snapped a selfie with a crowd of Lafayette students mugging behind him, and for about 90 minutes Monday Oscar-winner Tom Hanks spoke of war, acting, and finding truth in Hollywood’s smoke and mirrors.

He shared a stage with President Alison Byerly and Donald L. Miller, MacCracken Professor of History, whose book, Masters of the Air: America’s Bomber Boys Who Fought the Air War against Nazi Germany, Hanks is developing into an HBO miniseries with director Steven Spielberg.

“All of the caregivers of my youth … they all had experienced the war,” Hanks told the 1,800 students, faculty, and staff members in attendance. “I was becoming a conscious social being at that time.”

They lived three acts, Hanks says of the WWII generation. Before the war, they were carefree. They came of age during the war. “And they really began a journey to who they were after the war.”

Check out the galleries

Hanks’ journey began in public school, and wasn’t much of a stand out, until he met a world geography teacher who lit a spark for history and a drama teacher that taught him the “importance of putting on a show.”

That resonated with Heman Matharu ’18 (Phillipsburg, N.J.), a physics and math double major. “He took what his teacher did for him and did it for us,” says Mathara, who is now inspired to read Stephen Ambrose’s Band of Brothers, which Hanks previously adapted as an HBO miniseries.

Matharu says he especially appreciated Hanks’ take on falling prey to stereotypes. “A character is an individual,” Mathara says, echoing Hanks’ thoughts on the personal responses of characters. Even though the responses are scripted, they have to come from authenticity.

Students helped Prof. Donald L. Miller make Masters of the Air, which is being made into an HBO miniseries produced by Tom Hanks.

“You can’t fake any of it,” Hanks told the students. In Captain Phillips, the actor said director Paul Greengrass purposely kept him separate from the performers portraying Somali pirates until the tension-filled scene when they boarded the boat.

Hanks shared a number of behind-the-scenes stories with the students. In Saving Private Ryan, he recalled working with a rookie actor, who just graduated from drama school. The actor stood in front of him during the scene when the Allies stormed Omaha Beach. 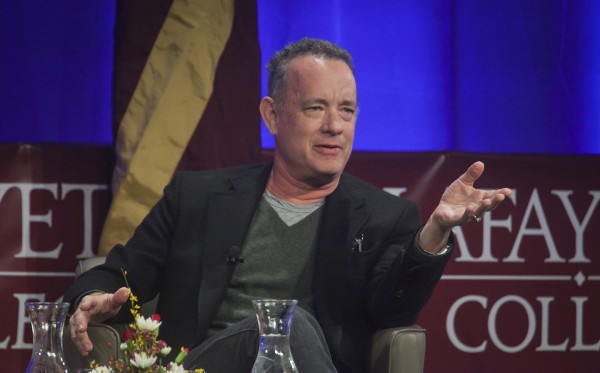 Hanks’ character had to jump into the ocean with the young actor. Problem: The extra didn’t know how to swim.

He spoke of the veterans he met who were depicted in the miniseries. They were individuals, Hanks says; each were affected by the war in personal ways. Some were uncomfortable letting their families – and the world – in on what they’d done as part of their job as service men.