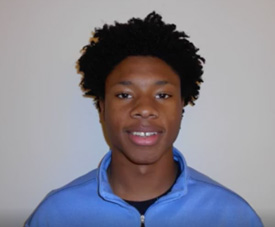 Don’t judge him by his hair. Or maybe you should. Justin says some people see the wild, twisting growth atop his head and form snap judgments. They don’t see an altar boy, a track star, a class president or someone working to become an Eagle Scout. Justin is all those things, but he’s also the guy dancing his heart out to Silento’s “Watch Me (Whip/Nae Nae)” and breaking through tackles on the rugby field. And then he performed at the MET in the American Ballet Theater’s production of Othello. And he also participated in Youth About Business, interacting with suit-and-tie types. Maybe it’s the perfect haircut, after all, for someone with so many sides.

I visited Lafayette three times before the Nov. 15 early-decision deadline. The first time was in the spring of junior year for the standard tour and information session. The second time was an on-campus interview. The final visit was an overnight with the track team. Each time I visited campus, I became more interested in Lafayette. I left with a sense of excitement. There was always something going on; students were clearly involved in the Lafayette community. It seemed more engaging than any of the other 10-plus colleges/universities I visited. I knew it was a community of which I wanted to be a part.

When did Lafayette become your first choice?

After my overnight visit to Lafayette, I knew it was the place I wanted to spend my next four years. Although I was there as an athletic recruit, it was an experience in an economics class that impressed me. The professor was scheduled to meet with a student for a review, but had to reschedule due to a family emergency. On Sunday afternoon, the professor met with this particular student to ensure he was prepared for the exam. I always felt as though professors wanted students to succeed and this experience confirmed it for me.

What are you most excited about?

The idea of interacting with people who are interesting and involved in the Lafayette community. The rivalry with Lehigh. GO LEOPARDS!!! The school spirit.

What clubs or organizations do you plan on joining?

I am a student-athlete and will be devoting time to the track and field team. When not running, I would like to get involved in First Year Class Council, Econ Club, Kirby Government and Law Society and Association for Black Collegians.

What three words describe how you feel about being a member of the Class of ‘20?