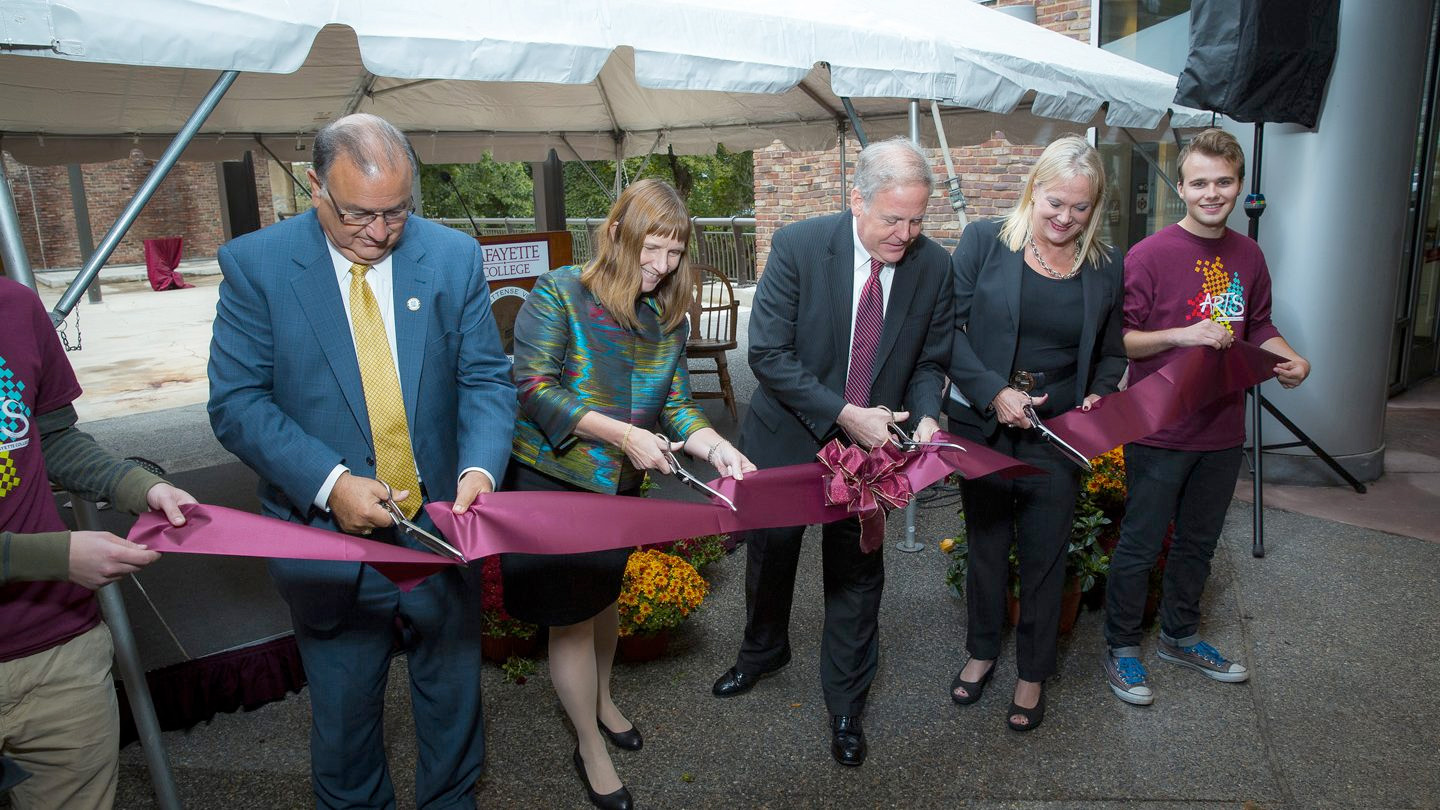 Lafayette did more than celebrate the completion of the Williams Arts Campus on North Third Street Friday.

During a ribbon cutting ceremony to mark the opening of William C. Buck Hall, the architectural crown jewel of the downtown campus, the College reinforced its belief in the arts as an economic driver, purveyor of culture, and catalyst for innovation.

It was attended by hundreds of dignitaries, alumni, students, faculty, and staff, as well William C. Buck ’50 and his wife Laura, whose gift to the College made the facility a reality.

Planning for the arts campus began about 15 years ago when the Williams Visual Arts Building was first conceived by former College president Arthur Rothkopf, Byerly said.

“He felt it would not only add an important facility to the College but would serve as a different kind of gateway to Lafayette’s campus” from downtown Easton, she said. “As we all know, that building has become an extraordinary creative hub that has added tremendous energy to the academic programming of the arts.”

Former president Daniel H. Weiss continued Rothkopf’s vision with the completion of the Ahart Family Arts Plaza and by reimagining the building at 248 N. Third Street as a space for students working in creative mediums. The building now houses the College’s film and media studies program.

The opening of Buck Hall completes the downtown arts campus.

“This is not only a collaboration across generations, it also involves strong partnership between the College, the City of Easton, and Commonwealth of Pennsylvania as critical grant money was important to the completion of the project,” Byerly said.

Mayor Sal Panto said the downtown campus is further evidence that the College and city are on a course to be a role model for town-gown relations. It’s also an important piece of the Bushkill Creek Corridor Project, which includes the Karl Stirner Arts Trail and Silk Mill Project, expected to be completed by 2018.

“Few people gave this project any sign of success, and today it represents more than $70 million of economic development in our city,” he said. “All of these projects are the culmination of a partnership between Lafayette and the city.”

And the impact of that partnership extends beyond Lafayette’s downtown campus and Easton’s footprint, said Robin Weissmann ’75, Pennsylvania Secretary of Banking and Securities, noting it’s no secret the arts have the capacity to grow business and jobs.

“We all know how important the arts are in sparking creativity and innovation,” she said.

State Rep. Bob Freeman said the arts play a tremendous role in the revitalization of an urban area such as Easton, and strong, vibrant cities are critical to Pennsylvania’s economic success.

“If a city declines, it can pull an entire region down. But if it prospers, it can become a … catalyst for regional identity, stability, and economic opportunity in the way Easton has, and the arts are an important ingredient in that success.”

The partnership between Lafayette and Easton has made our community a true destination, Freeman said, “a mecca for culture.”