Witty, wry and direct, Sarah Vowell delighted a crowded Colton Chapel Wednesday night with a discussion of her latest book Lafayette in the Somewhat United States, an unconventional examination of the teenage Frenchman who both loved and earned the love of young America.

After opening the program with a reading from the final pages of her book, Vowell sat down with President Alison Byerly, who led a probing conversation ranging from what inspired the book and the psychology behind the Marquis’ decision to come to America to Vowell’s use of her own experiences visiting historical sites to render narrative, accessible prose.

A Marquis Q&A with Sarah Vowell

Read more about the Author

Lafayette’s return trip to the United States in 1824, “the hoopla and how the American people just went berserk” over the aged last living general of the Continental Army motivated Vowell to research and write the book.

“Two thirds of the population of New York came to greet his ship,” she said. “Every night was a party. It’s been a while since we agreed upon someone like that.”

Fueling the nostalgia and desire to celebrate and warmly embrace a living link to the founding of the nation “was so much fear about what was going to happen” with the Civil War, she noted. “There was an element of ‘now what?’ The glory days of the founding were over.”

Byerly noted that the extent of the adoration heaped on Lafayette inspired the naming of the College in 1826. There was no other reason to name it Lafayette College; it was a self-created identity by citizens of Easton who went to see Lafayette in Philadelphia.

On Lafayette’s decision as a 19-year-old to seek battlefield glory in America, against the wishes of his king and family, “the cerebral cortex is not fully formed until 26, which explains a lot,” Vowell said. “He’s a boy, and he doesn’t necessarily make mature decisions.” 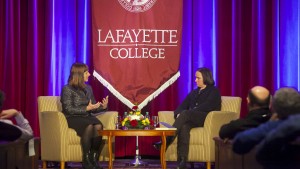 President Alison Byerly sits down with author Sarah Vowell for an informal discussion.

In letters to his pregnant wife, Lafayette further rationalized his actions, holding up America as a place to learn of justice and the ideals of enlightenment “and that’s why he left her and an unborn child.”

France, unfortunately for Lafayette, was at peace, and he and other adventure-seeking soldiers “were out of job” after years of hostilities in Europe and North America. Fortunately for the American cause, “he was the son of a soldier and came from a long line of soldiers that goes back to Joan of Arc,” Vowell said. And he also had a beef about his dad, who was killed in the Seven Years’ War with Great Britain.

Lafayette displayed a boyish “put me in coach” enthusiasm and had “a hunger for fame,” she said.

“He would have loved this, the fact that we’re just sitting here talking about him — and his picture is on all your stuff,” Vowell said to laughter.

In researching her latest book and her other nonfiction works, each of them “as much travel books as history books,” Vowell said she places a high importance on visiting historical sites and learning from retired docents, park rangers, and locals.

“It’s important to go to these sites,” she said. “I’m interested in memories and how events are remembered or how they’re not remembered, the latter of which I think is a problem in this country,” she said. “I learn from the locals, the people who are proud of where they live.”

Similarly, Lafayette, and eventually his other French comrades, learned from what was around them.

“Unlike his urbane French compatriots who were accustomed to a certain standard of living, he didn’t look down on American’s rusticity,” Vowel said. “He had unmitigated hope for the Americans.”

She shared a vignette of a French officer’s horror observing Washington and his men eating their meals with all of the food piled onto single plates — “they didn’t have a cheese course.”

“But when the Americans started to fight with them, they changed their tune when they saw how well they fought with the equipment they had,” Vowell said.

Lafayette ultimately helped the Continental Army establish a nation where, as Washington once told the young aristocrat hurt by anti-French sentiments, people speak without thinking.

“Disagreement is annoying,” Vowell said. “It’s also the best of who we are. We have the freedom to say what we think. It all comes back to Lafayette.”