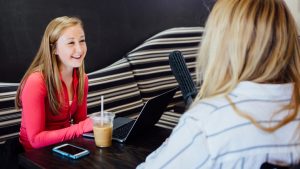 Emily King ’20 (left) enjoys an iced coffee with friend Cece Palmquist ’20. Both are regulars at Mojo 516 Café, one the coffee shops near campus.

Cece Palmquist ’20 and Emily King ’20 sit across from one another at Mojo 516 Café, one of the popular coffee shops next to campus.

They need a break. Palmquist, who plans to double major in economics and Asian studies, is sipping from a Beach Bumm Smoothie (that’s strawberry, mango, pineapple, and banana). King, who is leaning toward policy studies, has an iced coffee.

“I’m from McKeen” Hall, a dormitory just around the corner from Mojo, Palmquist says. “I’m here too often.”

They’ve just left their Math 141 “Economics Calculus” class. King was up at 8 a.m., had a psych class at 9, biology at 10, studies, lunch, and now a break. Tonight is track practice—King runs the 5K outside and the 3K indoors.

Palmquist is on crutches, having torn an ACL several weeks ago. Still, she has three classes—Statistics, Chinese and Calculus. At lunch, she went to a talk about Britain’s exit from the European Union. It’s a subject she cares a lot about, since she’s studying abroad in London this fall.

This summer, she’s taking courses in Buddhist philosophy in China and geology in Iceland.