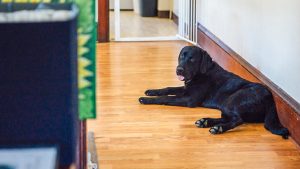 Uh … is that a Leopard? Hugo doesn’t look much like a big cat, but he’s one of three canine residents at Dog House, one of Lafayette’s Living Learning Community houses.

Biology major Grace Veghte ’19 should be hard at work in a three-hour class. During spring break, however, she hit her head skiing in Utah, and she’s still dealing with the lingering effects of a concussion. So she’s opted out of class and is spending the day resting.

But she gets to hang with Hugo.

Hugo, an 8-month-old Labrador retriever, is a resident of Dog House, one of Lafayette’s Living Learning Community houses.

Dog House is an old brick Victorian near campus where seven students train three black Labs like Hugo to be service dogs. Dog House residents live with the dogs, who sleep in posh crates in their rooms; outfit them with their service harnesses; and teach them to focus.

They take the dogs to class, to campus events, or sometimes just to hang in friends’ dorm rooms.

In class, they aren’t disruptive, though on occasion, someone like Hugo will whine or snore or gurgle.

Living Learning Communities are based on the model of the residential college, where faculty support student-to-student engagement in campus housing based on an academic curriculum. In addition to Dog House, there’s Chinese House, Documentary House, Foodie House, and others.

Veghte says the dogs’ attitudes change when they don their service vests. They immediately become focused entirely on their masters’ needs.

This isn’t one of those moments. Hugo is vestless—sprawled on the hardwood floor, tongue lolling.

“They get the chance to just be dogs,” she says.

Next year, she’ll live in her sorority house. She’ll miss the dogs like crazy.