On the bottom floor of Acopian Engineering Center, three students in lab coats cluster around plastic tubes, beakers, and piles of soil. 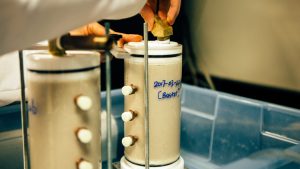 A team of engineering and biology students work to develop a bacteria that might make soil more erosion resistant.

The project can make soil more rigid. Say you’re an engineer building a dam. Erosion-resistant soil might come in handy.

The project is funded by the National Science Foundation, and Meng, Mori, and Chen have been struggling with it since October. They and others at Lafayette will continue to work on it for five years.

Mori says he enjoys “the unexpected challenges” of the project.

“For me it’s interesting, because I never took college-level biology classes,” Meng says. “So it’s cool to work with a different department.”

“Yeah,” Chen says. “I haven’t done anything related to engineering before. It’s great.” 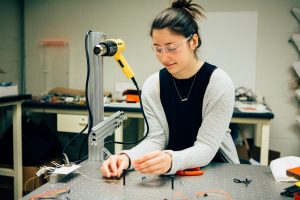 Emma Collins ’17 works on the wiring that will one day power a prosthetic finger.

In an Acopian lab down the hall from where Meng, Mori, and Chen are working with soil, three mechanical engineers lean over piles of wiring like they’re praying.

The Class of 2017’s Shannon Hurley, Leslie Weaver, and Emma Collins are all plugging away at their senior design projects.

Weaver is part of a medical-device design team in Assistant Professor Brent Utter’s class. She’s trying to improve the EpiPen, the injection kit that saves the lives of patients suffering extreme allergic reactions.

“We’re trying to have a liquid and a powder that are integrated in the device rather than just the liquid as it is currently,” she says.

A robot version of an archerfish, to be precise. That’s a freshwater fish that swims in streams in places like the Philippines. It attacks its land-based insect and small animal prey by shooting them with a spray of water from its mouth.

Turns out, the aquatic creatures learn how to become living water pistols the same way you might learn how to “dab”—by watching their friends. Hurley’s team’s mecha-fish will (hopefully) float, swim, and shoot. If they get it right, psychologists researching social-cognition learning will be able to learn from it. Hurley and her peers will send their artificial archerfish to another team at Villanova University.

“I’m working on the wiring now,” Hurley says, holding up what looks like a fish tail stuffed with spaghetti. “This is the control of the fish. I’m working the pitch, which angle it’s floating at on the water.”

A few feet away, Collins is working with wires connected to a plastic skeleton. It is a prosthetic finger.

“You can get a whole hand prosthetic,” she says. “But very few are for if you lost just a single finger. So we’re making a smaller prosthetic just for one digit.”

The team is using shape-memory alloy. If she runs an electric current through the alloy, it expands and contracts—causing it to bend like a real finger.